The NSW Fair Trading Commissioner will investigate whether the organisers of Sydney's Gay and Lesbian Mardi Gras breached Australian Consumer Law by misleading people who purchased tickets to the official after-party.

The party, which kicked off after Saturday's Mardi Gras parade and ran until 8am on Sunday, was headlined by international acts Sam Smith, Dua Lipa and Kesha. 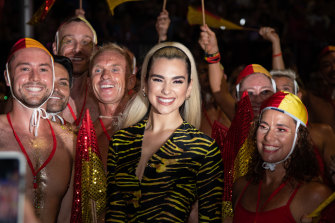 Dua Lipa, centre, was one of the headline acts at the Mardi Gras after-party.Credit:AAP

Mardi Gras organisers confirmed 10,000 people purchased tickets to the sold-out event at the Entertainment Quarter at Moore Park. But almost half of those partygoers missed out on the highlight performances of the night with the main venue, the Hordern Pavilion, quickly reaching its capacity of 5500. Dozens of ticketholders, who were stuck in queues for hours, took to social media on the night, criticising the event's organisation.

Tickets to the after-party included access to four smaller stages in the precinct, where lesser-known artists performed.

Fair Trading Commissioner Rose Webb says she will investigate whether or not consumers were misled.

"We are still looking into the circumstances of what happened," Ms Webb told The Sydney Morning Herald and The Age.

"It's one of those ones where you go, 'Should they have only sold 5000 tickets because that's what the Hordern Pavilion can take?'

"At the moment it's a bit hard to say categorically they've broken the law."

Ms Webb said the case would hinge on "how fine the fine print was" and whether a reasonable person could have known their ticket didn't guarantee seeing the main acts.

"It's just a matter of whether they made that clear enough," she said.

Mardi Gras organisers apologised and said they were "deeply disappointed" about the miscommunication. A spokesman said the after-party's official website was updated to include a disclaimer in fine print, two weeks before the event.

"Venues may reach capacity at different times. Should this happen, entry will be restricted for crowd safety reasons," the website said.

Ticketholders received an email two days prior to the event with the same information given at the bottom of the email.

One of those to miss out was Brisbane resident Vanessa Vilaydeth, who said she was "sad" her night ended without seeing the headline acts.

Ms Vilaydeth purchased tickets to the party in November, before the main performers were announced. She said she couldn't recall any information about venue capacity at the time of purchase, and her ticket confirmation email did not include a disclaimer about the venue capacity.

On Thursday afternoon, two days before the party, Ms Vilaydeth received a 1300-word email from Ticketek titled "Event Information". Details about the main venue potentially reaching capacity was 17 paragraphs down, along with the note, "Popular artist performances will be shared live on screens in the Plaza for everyone to enjoy".

Ms Vilaydeth said she was busy preparing her float for the parade and admits she "failed to read the whole email".

"I reached the after-party venue at 11.45pm. By this time the line for the main stage at the Hordern Pavilion had snaked around the entire venue," she said.

"I know people who flew in from overseas for the event who were in the line the entire time, missed all the main acts and only got in when the last DJ played.

"Being told [about possible capacity issues] two days before the event is not sufficient. I did not pay $200 to watch the main acts on a screen."

Ms Webb encouraged unhappy partygoers to seek a resolution from the ticket provider in the first instance.