It would cost less than $200 million to convert the Commonwealth’s fleet of vehicles to lower emissions electric models within the next decade, according to an analysis by the Parliamentary Budget Office. 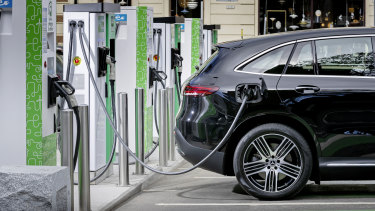 It would cost $200 million to convert the Commonwealth fleet to electric vehicles, the Parliamentary Budget Office has found.

It assumes vehicles are replaced gradually at retirement age, with completion by 2030. The $200 million represents the cost over and above the price of replacing with petrol and diesel vehicles and includes investment in charging infrastructure, which would be expanded with the fleet.

President Joe Biden pledged on Monday to replace the US government’s fleet of almost 650,000 vehicles with EVs produced in the United States, which would cost US$20 billion according to a Reuters estimate.

The President’s plan, which has not set a deadline for EV replacement, would help deliver on his ambitious goals for climate action and domestic manufacturing and slash the government’s fuel costs.

The UK, Japan, France and Germany have pledged to ban sales of combustion engines between 2025 and 2030.

In Australia, the federal Bureau of Infrastructure, Transport and Regional Economics forecasts 60 per cent of new car sales in Australia will be electric by 2046.

Around 20 per cent of Australia’s emissions come from the transport sector and EVs will be essential to achieving the country’s goal under the Paris Agreement to achieve net zero emissions this century.

A typical electric vehicle that is recharged with Australian electricity creates 40 per cent less emissions than a petrol-powered car, even though around 60 per cent of the grid’s power comes from high-emitting coal generators, according to a recent study from the University of Queensland and Queensland University of Technology.

The federal government is working on an EV policy that will focus on infrastructure like charging stations and support for research and development into new technology, but it is not expected to incentivise buyers to switch from petrol and diesel vehicles.

“Australia has fallen well behind all other developed countries that have clear targets to cut pollution from cars,” Greens Senator Janet Rice said. “We’re becoming a dumping ground for polluting vehicles and have no strategy to catch up with the rest of the world on EVs.”

Senator Rice said car buyers would benefit from a boost to the second-hand market when, after five years, an EV is retired from the Commonwealth fleet and re-sold.

The Parliamentary Budget Office analysis assumed the price difference between EVs and internal combustion engine vehicles would remain constant over the period to 2029-30.

The price difference may fall over time, depending on EV manufacturers. Industry advocates claim manufacturers ignore Australia and save their limited supply of cheaper models for international markets where governments subsidise the cost of EVs and place restrictions on car emissions to limit sales of other cars.

The five cheapest electric models available in Australia cost between $44,000 and $64,000 and are expensive compared to the cheapest petrol models – which start at less than $15,000. The cheapest EVs in the UK and US sell for about $30,000.