Strange and isolated places aren’t everyone’s cup of tea – but they are where photographer Dieter Klein gets to work.

He has been roaming shabby backyards, dusty barns, deserted fields and thick forests across Europe and the U.S to find and photograph once-gleaming vehicles left to rust and ruin.

The mesmerising results appear in stunning new coffee table book Lost Wheels – The Nostalgic Beauty of Abandoned Cars, which is out next month.

The German’s subjects, from a 1937 Chrysler Imperial with a tree growing through it in Georgia to a 1974 Pontiac Grand Prix lying abandoned in a Wyoming field, Klein’s subjects ‘creak with bygone glamour and might’, says publisher teNeues.

It adds: ‘As moss and gnarled branches transform motors into eerie artifacts, Klein’s award-winning automobile photography is not only a tribute to classic cars, but also to the transformative power of nature and the enduring intrigue of people and incidents unknown.’ 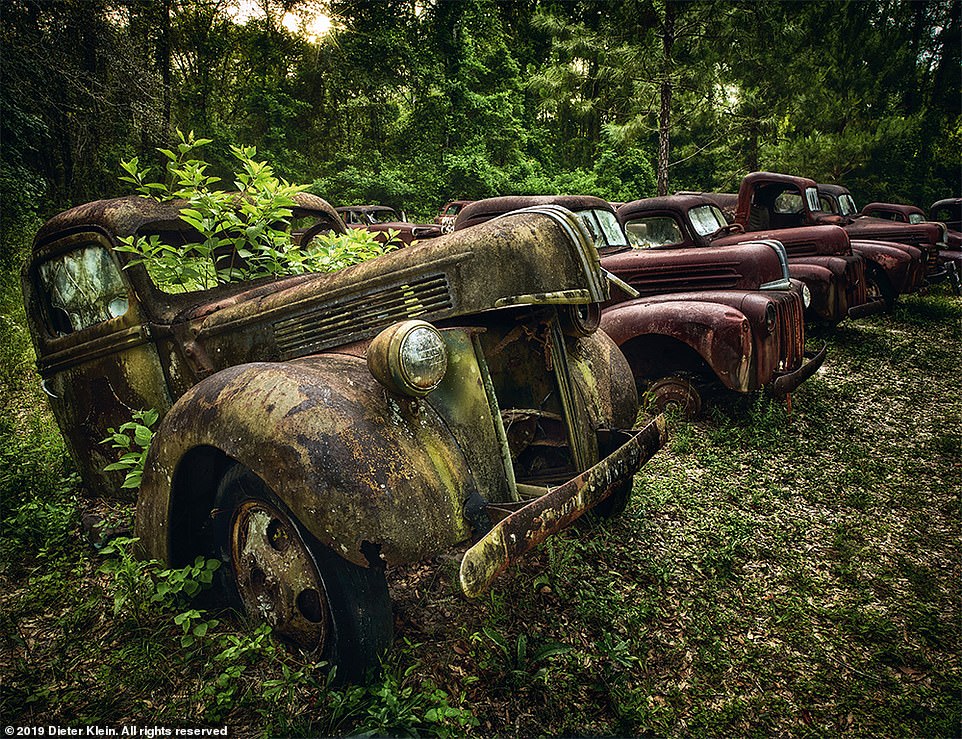 Mother Nature has staked a firm claim on this row of  1941 Ford Trucks in Florida. This model was designed for city-based business folk such as dry-cleaners or shopkeepers – and could cruise at 40mph 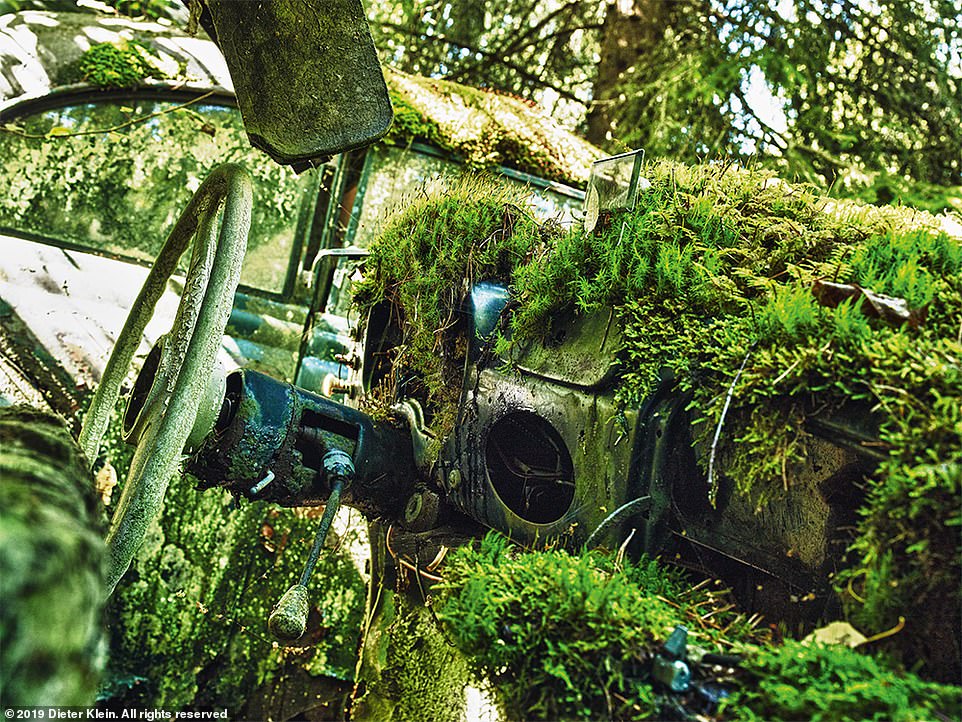 This astonishing image, taken in Sweden, shows the interior of a DKW F89 Meisterklasse (‘Masterclass’) that’s smothered in all manner of vegetation. Intriguing for petrolheads… and botanists. This model of car was manufactured between 1950 and 1954 by West Germany’s Auto Union GmbH and could hit 60mph with the wind behind it 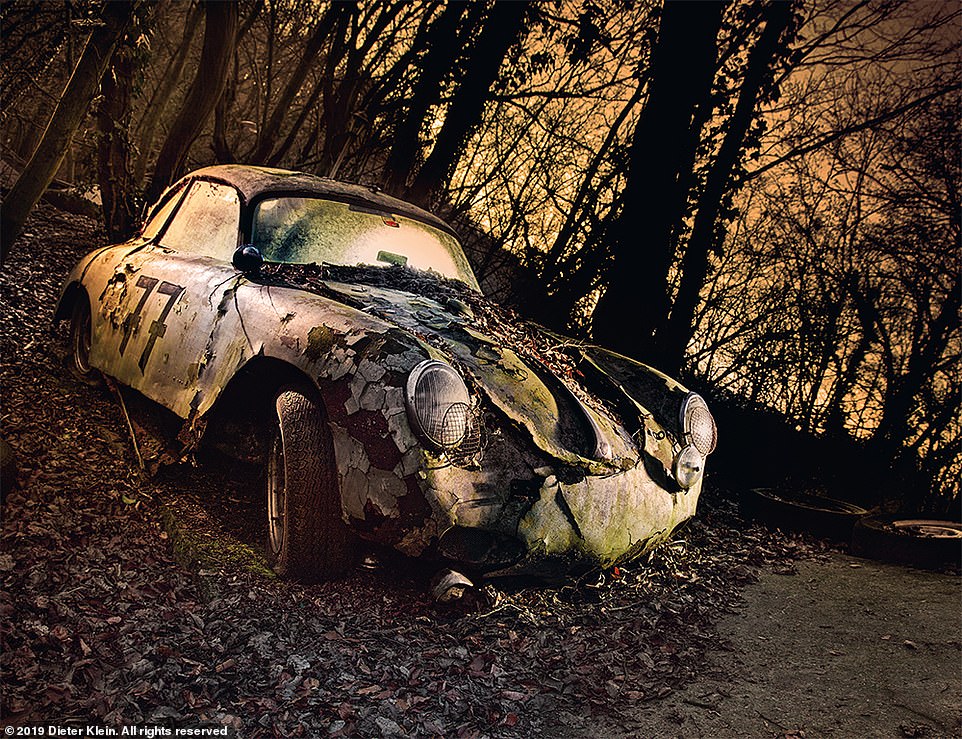 A 1950 Porsche 356 in a rather severe state of disrepair lies abandoned among falling leaves and bare trees at an undisclosed location in Germany. The 356 was Porsche’s first production car. Top speed? Around 105mph 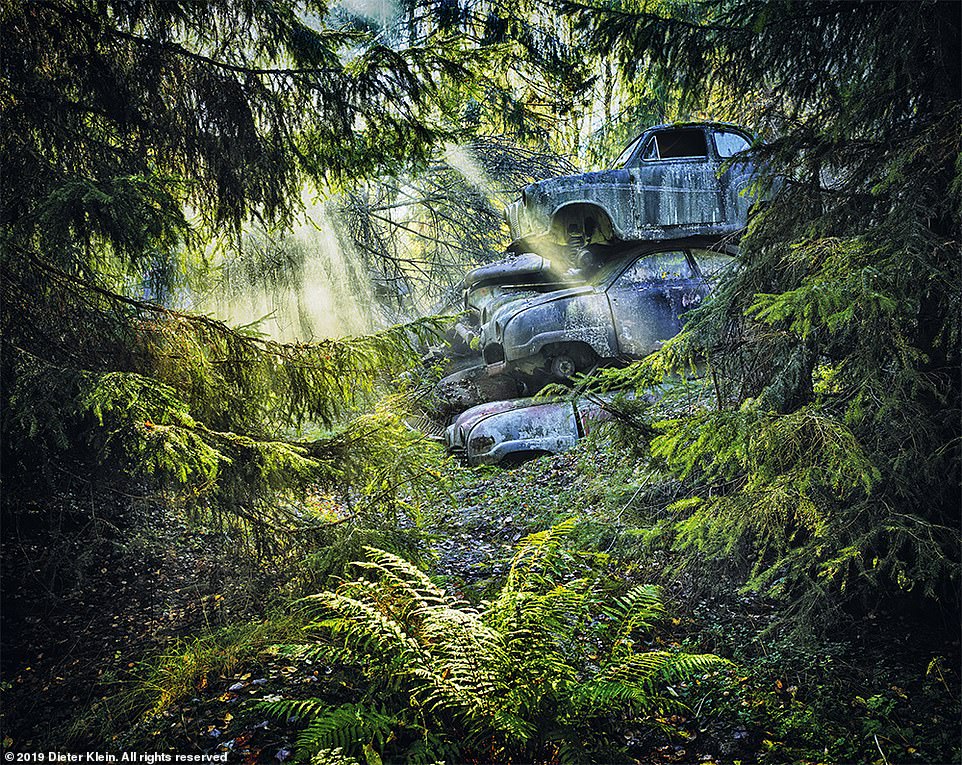 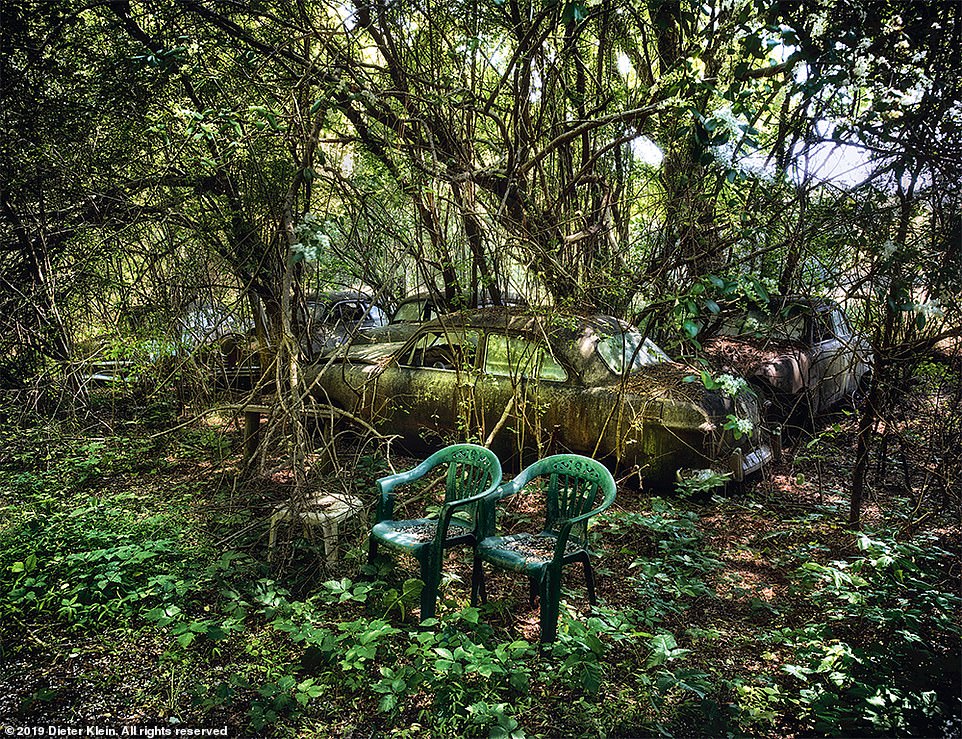 This haunting image shows a 1949 Ford and a 1946 Chevrolet lying abandoned in an enchanting forest in the state of Georgia. They’re clearly past their prime – and so is the plastic furniture 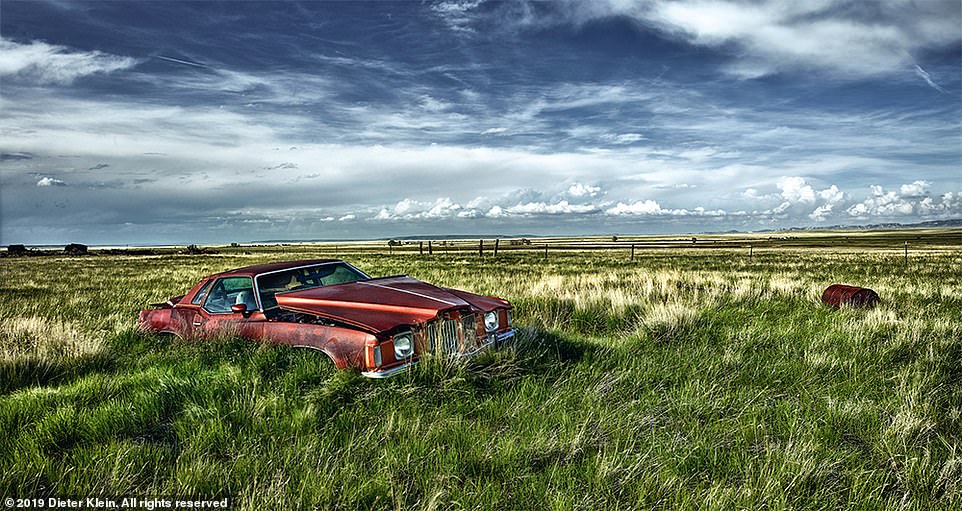 A lone and battered 1974 Pontiac Grand Prix lies forlornly in the middle of a lush green field in the state of Wyoming. This model was introduced in 1962 and produced in various guises all the way to 2008

While travelling around France, Klein came across this row of abandoned Citroen Traction Avants – a model made between 1934 and 1957 – overwhelmed by branches, leaves and mud 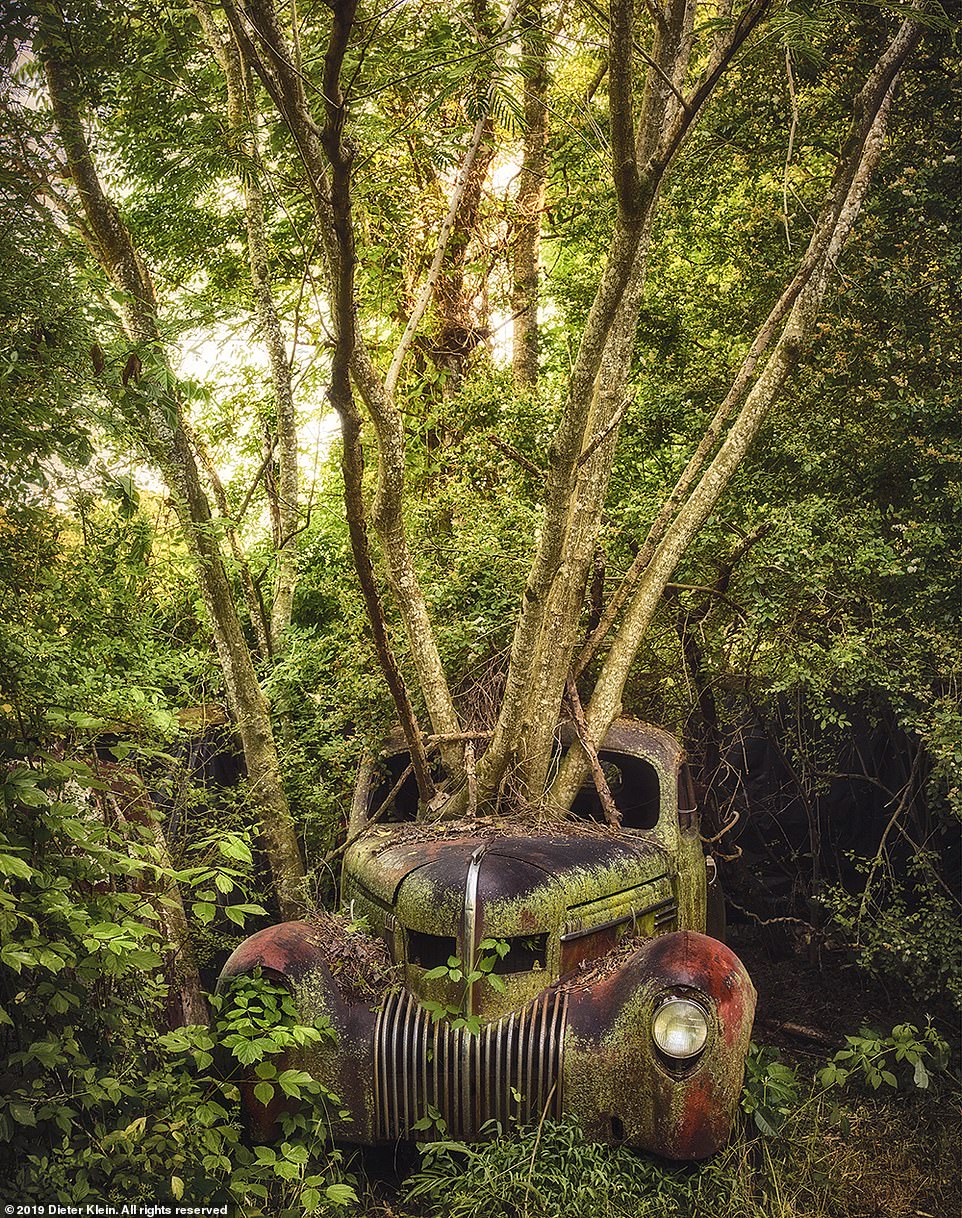 Half car, half tree: Klein found this 1937 Chrysler Imperial while travelling around the state of Georgia. The Imperial was first produced in 1926 and marked Chrysler’s entry into the luxury car market 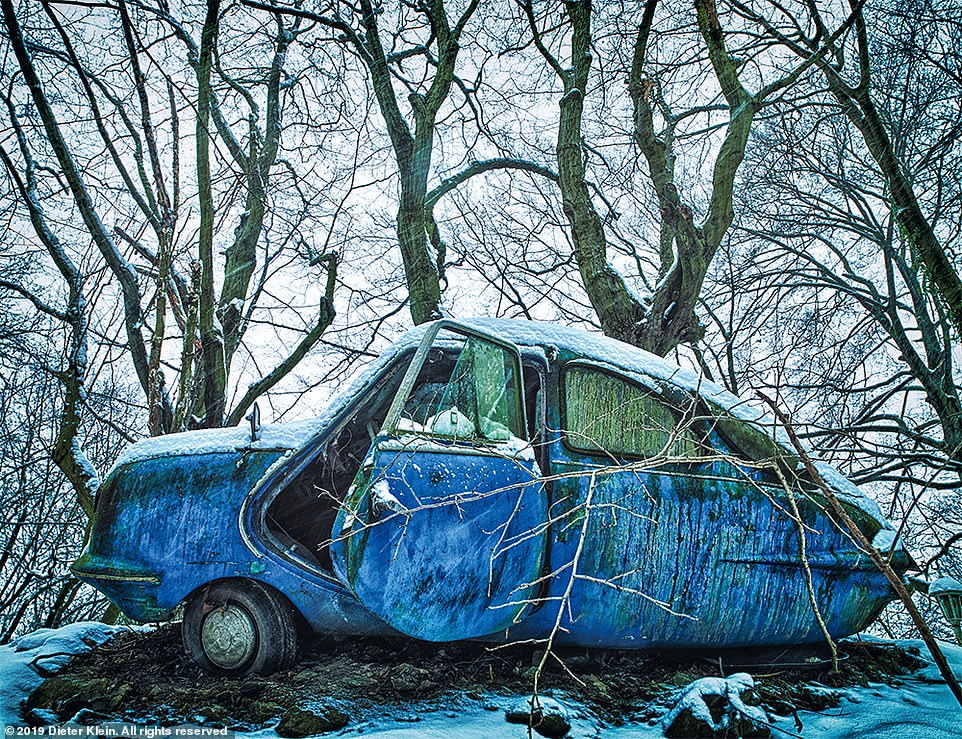 A 1956-1962 Fuldamobil S7 Fram King left to rust in the central German city of Fulda. Many describe the model as the first ‘bubble car’. Dieter Klein’s imagery of deserted automobiles has won him prizes for best photograph at Discovery Days 2017, in Switzerland, as well as at Festival El Mundo 2018, in Austria 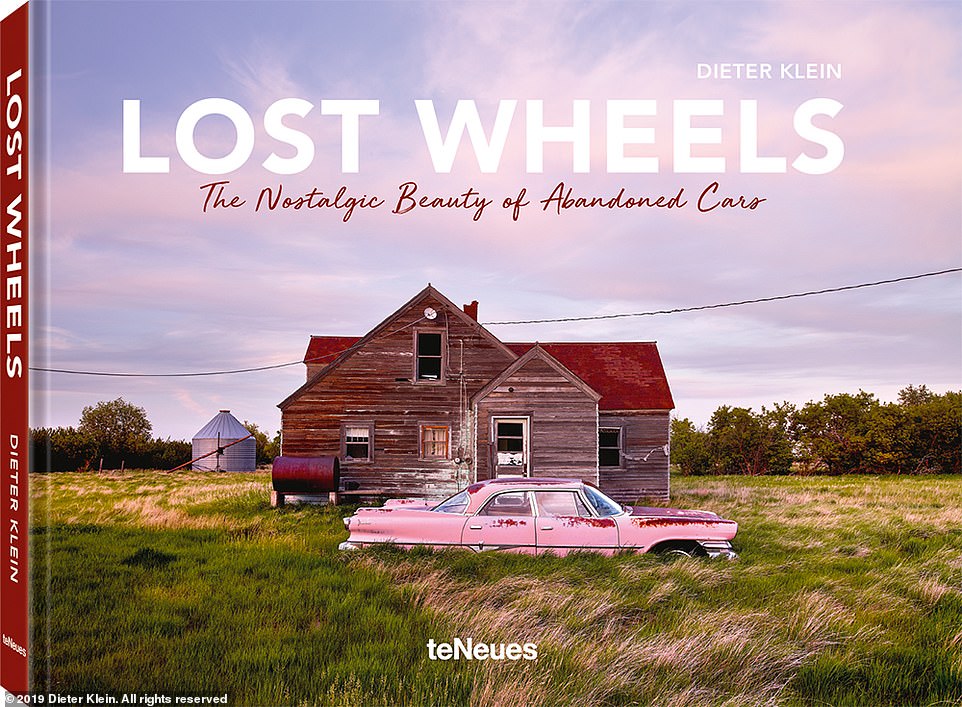 Lost Wheels – The Nostalgic Beauty of Abandoned Cars by Dieter Klein, published by teNeues, will be available in May for £29.95