It’s too easy to miss brilliant streaming shows, movies and documentaries. Here are the ones to hit play on or skip.

The Shrink Next Door ★★★★
Apple TV+, from Friday 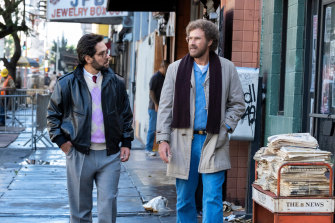 Paul Rudd plays a possibly predatory psychiatrist treating a New York businessman played by Will Ferrell in the marvellous comedy-drama The Shrink Next Door.Credit:Beth Dubber/Apple TV+

Will Ferrell, Paul Rudd and the marvellous Kathryn Hahn in a story about a Manhattan shrink who’s so dodgy that the tale could only have emerged from a buzzy documentary podcast? Backsides are scooching themselves along the sofa in anticipation.

Psychiatrist Isaac Herschkopf (Rudd) does seem a horrendously predatory piece of work, but it sometimes takes a dupe to get duped – Difficult People creator Julie Klausner has observed, a little unkindly, that Dirty John might equally have been titled Stupid Debra. And it seems that dupes don’t come more easily duped than diffident New York businessman Martin Markowitz. As played by Ferrell from the comfort of his own well-worn wheelhouse, Martin is a case of arrested development given to anxiety, timidity and the occasional outburst of petulance.

It’s the early ’80s, Martin has just inherited his father’s fabric business, and things are going so poorly that his sister, Phyllis (Kathryn Hahn), has been pushing him to see a therapist. Unfortunately, the therapist Martin sees is Herschkopf, who he quickly comes to revere as “Dr Ike”. Dr Ike takes even less time to size Martin up as an easy mark. “You’re not Easy-Mark Markowitz, are you?” Ike asks brazenly, pretending to build him up even as he’s about to bilk him out of an extra hour’s fee for their first session.

If there’s anyone who’s going to keep Dr Ike from taking Martin to the cleaners it’s Phyllis. “A guard dog will just bite you,” she tells Dr Ike during their first confrontation. “But a sister will rip out your trachea and play it like a goddamn flute.” Phyllis, with her big glasses and hair piled messily on top of her head, looks every inch the aggravated ’80s New Yorker, and she’s certainly the most intriguing character in this week’s first batch of three episodes.

Martin is a familiar sort of shambling Ferrell man-child; Dr Ike is a superficially charming dirtbag; but it’s Phylllis with her job at the fabric factory, her second job looking after Martin and her untidy personal life as a single mum outgunned in her looming divorce battle who emerges as the emotional heart of the thing. This clutch of episodes directed by Michael Showalter (Search Party, Grace and Frankie) is a very more-ish one, bustled along by some terrific dialogue, bizarre developments and a raising of the stakes when Dr Ike realises just how much Martin has for him to take.

When Riley Flynn (Zach Gilford) finishes a prison stretch for a fatal drink-driving accident and returns to the fishing village he grew up in, the place is as much of a ruin as he is. An oil spill has devastated the fishery, and the island’s population has dwindled to 127 – about a tenth of whom attend Sunday mass at the old wooden Catholic Church. 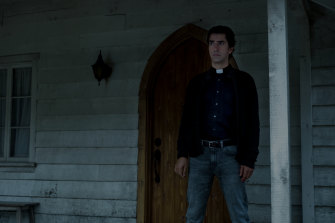 Revival is in the air when an earnest young priest, played by Hamish Linklater, takes over the church of a struggling fishing village in Midnight Mass.Credit:Eike Schroter/Netflix

When an earnest young priest (Hamish Linklater) takes over the church, the pews start filling up and there’s revival in the air. People seem ready to believe in miracles again, even as something sinister seems to have begun stalking the island.

Writer-director Mike Flanagan (The Haunting of Hill House, Gerald’s Game) creates a claustrophobic little community where nothing is secret and the greatest horrors are those of our own consciences. With heavy themes of guilt, hope and redemption, it’s probably the most Catholic thing you’ll see all year – somehow all the more so for having a soundtrack led in biblically informed style by the Jewish Elvis himself, Neil Diamond.

This Kiwi gold-rush drama based on the novel by Eleanor Catton begins ominously, with the estimable Eve Hewson (The Knick), looking like a lamb headed for the mint sauce. She’s English immigrant Anna, who steps ashore revealing her own illiteracy and lack of street smarts, so becoming a target for predatory men and fake friends such as fortune teller Lydia (Penny Dreadful’s Eva Green). No doubt series creator Claire McCarthy has much in store for her, possibly involving a rogueish prospector (Ewen Leslie) and a pitiless policeman (Callan Mulvey). 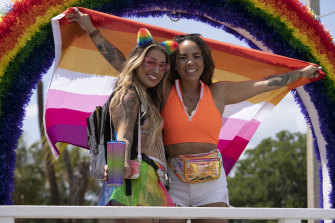 Tampa Bay’s LGBTQ scene is under the microscope in the reality show Tampa Baes.Credit:Lindsey Byrnes/Amazon Prime

Tampa Bay, Florida, has a big LGBTQ scene. The local lesbian culture is quite an eye-opener, consisting as it apparently does of drinking liquor from a funnel like a frat boy, getting lap dances like a strip-club perv and fighting with each other like a Real Housewives franchise. So far, so typical reality dross. Comic relief is in short supply, though there’s poignancy in the form of Olivia, a lost soul from Alabama with a tragic family history and a dangerous drinking problem. 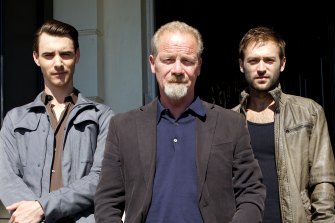 Scottish scary man Peter Mullan would put the frighteners on anybody, but here he’s playing a man with worries of his own. That’s Brighton crime boss Richie Beckett, who is playing at being a respectable businessman, having handed over his criminal enterprises to his sons (Harry Lloyd and Paul Nicholls). As this bloody four-parter begins, though, they’ve run into trouble with a murderous Albanian gang, so Richie has to come out of retirement just as he’s beginning his own terrifying battle with dementia. Compelling telly.

Behind the Monsters
Shudder 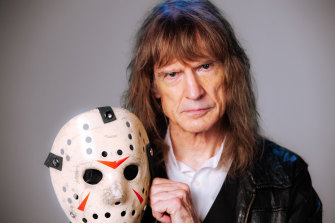 Who’s behind the Mike Myers mask? Tune in to Behind The Monsters to find out.Credit:Angel Melanson/Shudder

The horror season of The Movies that Made Us (Netflix) is full of entertaining recollections from low-budget sets. This similar series takes a more straight-up horror-nerd tack, with folks who were there (and who weren’t) delving into the symbolism and legacy of monsters such as Freddy, Jason and Chucky. It could do with fewer podcast hosts as talking heads, but it’s churlish to complain when you get footage of the guy who made Michael Myers out of a William Shatner mask showing how it’s done.

*Stan is owned by Nine, the owner of this masthead.