Drew revealed she was in an open relationship with Luke, while Kate said she has "been there with a Wilson too."

The actresses reminisced on how they had first met and also how they had both dated Wilson brothers, Luke and Owen Wilson, back in the early 2000s.

“When we first met, we were young and wild,” Barrymore said of meeting Hudson.

Hudson agreed and revealed that the two had met at a restaurant bar, “Chez Jay’s in Santa Monica with Luke Wilson,” Kate said, and noted that she and Luke were filming the 2003 movie “Alex & Emma.”

Barrymore and Luke had started dating in 1998 when they met on the set of “Best Men and Home Fries” and had split two years later.

“I was dating him, I think,” Drew said referencing Luke. “But I think he was also dating other people. It was an open relationship, we were young.”

Barrymore labeled their two-year relationship as carefree, and “low stakes” considering the young wild spirit they had both possessed at the time, “It’s so fun because when you are young it’s low stakes. We are just young, we are having fun. We are just playing, acting, hanging out. You are not taking it all so seriously, and it was fun. We had the best time.”

Kate also admitted that she had “been there with a Wilson too” — appearing to confirm she dated Owen, who she costarred with in 2006’s “You, Me and Dupree.”

Later in the interview the 46-year-old host asked Hudson what it was like to grow up with celebrity parents Goldie Hawn and Kurt Russell.

“She’s Goldie Hawn. She is an icon. How was that when you were a little kid with your mom?” Drew asked.

Kate got candid and admitted that growing up with Hawn was “very interesting” and compared the experience to a “rollercoaster.”

“My mom is a rollercoaster, she’s like a tornado. I always say she’s like a tornado of rainbows that doesn’t destroy anything. It just comes in and is wild and happy and crazy and gone,” she laughed. “And you’re like, ‘Where was she?’ And she’s like that with people, so sometimes for me when I was younger, it was like, ‘Ugh.’ And people would take the attention away from whether we were together. And mom is so loving that she wants to give everybody the time.”

Although her mother embraced fan encounters, Kate said that her stepfather had a completely different approach to fans when spending time with his family.

“Kurt is the opposite, so Kurt is like, ‘No thanks. I’m with my kids.’ And that always made me feel so good and so when they were together that was their rule, we are with our kids we are not going to get into signing autographs or taking pictures,” she admitted.

“They stayed very focused, which actually when we were younger and didn’t understand it made us feel really good because they were clear that the intention was to be present with us. But my mom, it depends on which way the wind is blowing on how she feels about this.”

Hudson also reflected on her own career as an actress and how at one point she had felt “pigeon holed” in the rom-com movie genre. 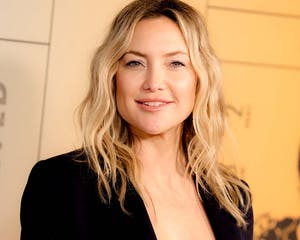 Kate Hudson Reveals Her Most Embarrassing Dating Story: 'I Showed Up with One Date, and I Left with Another'

“I love [rom-coms] so much but I have this thing with the rom-com though which it was always like, I personally think the best ones are so rooted and grounded but I find that when you get pigeon-holed or people want you in the system to be like, ‘Okay you are going to do this and then you do it.'”

The 42-year-old spoke about feeling as if she didn’t have enough creative freedom to try new things while filming the movies, “They just want to kind of dumb it down and make it too bright, too perfect and put the bows on it.”