And the new big sports bromance is…Michael B. Jordan and Drake? They sat courtside during the Lakers-Warriors play-in game, and fans were here for this new friendship.

The Wednesday game between the Los Angeles Lakers and Golden State Warriors was one for the history books – and the two fans who got to watch it unfold from the best seats in the house were none other than Michael B. Jordan and Drake. The two stars sat beside each other during the May 19 clash, and the way Drake, 34, and Michael, 34, acted – and reacted! – while watching the game, fans couldn’t fathom these two as Bbal besties. “I speak for everyone when I say. Drake and Michael B Jordan hanging out together should be illegal.”

“good thing drake & michael b. jordan get along bc one husband just isn’t enough for me,” said one thirsty fan. “Seeing Drake and Michael B celebrating after Bron hit the 3,” added another, referencing the game-winning 3-point shot that LeBron James made to book the Lakers’ spot in the 2021 NBA Playoffs. “I’m loving this Drake/Michael B. Jordan/Damson Idris BROmance.” “So drake n Michael B Jordan just kick it all the time, huh? I’m so sorry to whoever’s girlfriend/wifey ends up at the party they at cuz she ain’t staying faithful folk.”

This courtside appearance is not the first time that Drake and Michael have hung out. The Black Panther star had dinner with Drake at Craig’s restaurant in West Hollywood on May 14. The two kept it casual, with Drake rocking a silver bomber jacket while Michael opted for a red plaid jacket. Both men were fashionable when they got a bite to eat. Afterward, Drake reportedly attended a private party with Chris Brown, Travis Scott, Bobby Shmurda, and more. Five days after this dinner,  Drake, Michael B., Snowfall’s Damson Idris, and more attended a Lobos 1707 tequila party hosted by – LeBron James (per The Source.) So, the night before LeBron, 36, scored a triple-double —  22 points, 11 rebounds, and 10 assists – and shot the game-clinching three, he was partying with Drake and Michael B. 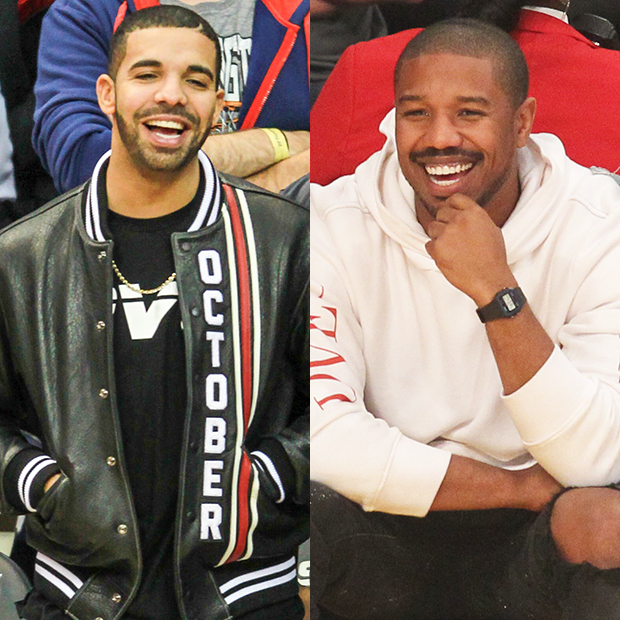 With the win, the Lakers claimed the No. 7 seed in the Western Conference. They will face the second-seeded Phoenix Suns in the first round, and ESPN reports that the Lakers are favored to win (the first time in the past 30 years that No. 7 has the edge over a No. 2). The Warriors aren’t finished yet. Due to the new play-in tournament, Golden State will play with the Memphis Grizzlies for the No. 8 seed. Fans will have to see if Drake and Michael appear courtside for any of those games.