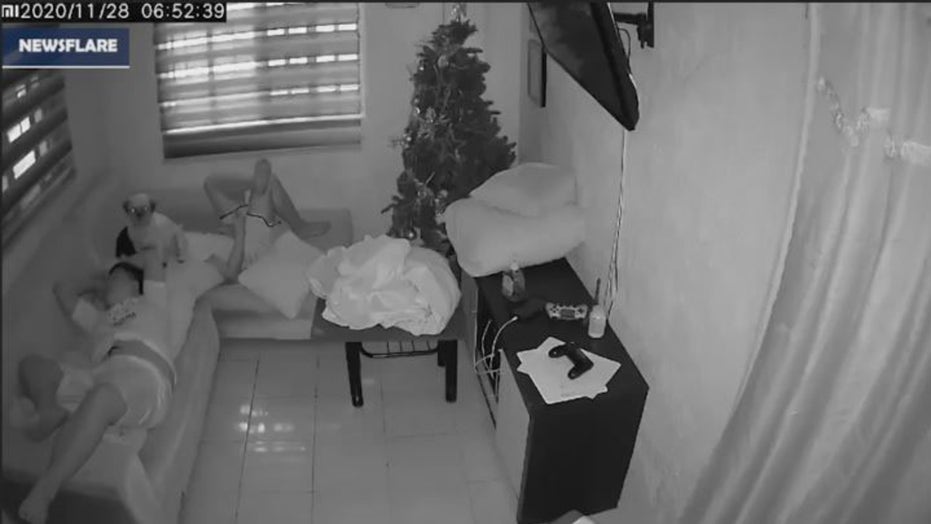 These hungry hounds had a hankering for homework.

Two pups in the Philippines are probably in the dog house after eating the schoolwork of some sleeping students.

Cousins Darren James Lamban and JB Barit recently fell asleep in a living room after finishing school in Antipolo, Rizal, and woke up to a nightmarish reality, Newsflare reports. As the young men slumbered, a security camera captured Sam the husky and Mayor the pug getting into hijinks with the homework, hilarious footage shows.

As seen in the quick clip, Sam wandered into the room and finagled some packets of paper off the media console, and Mayor leaped off one of the sleeping boys' chests to join the chaos.

The two chewed at the sheets, even tussling one packet in a tug-of-war-like struggle, before dropping the schoolwork in favor of a more amusing assignment — wrestling each other.

Later, the black and white footage switched to color as one of the boys woke up, looking sheepish and surprised to find the homework crumpled on the ground.

According to the outlet, the students had a lightbulb moment after reviewing the CCTV footage, realizing the canines were the culprits of the crime.