The Morrison government is forging ahead with the $90 billion submarine program, the Department of Defence confirming it has reached a critical deal with French company Naval Group to guarantee 60 per cent of the funding for the project will be spent in Australia.

Following a three-week visit to the country by Naval Group’s global chief executive Pierre-Eric Pommellet, Defence said the Strategic Partnership Agreement underpinning the project would now be amended to include the commitment. 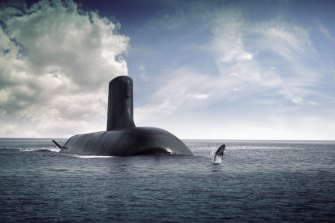 Tensions between Australia and Naval Group have been building in recent weeks over the $90 billion future submarine project.Credit:DCNS Group

Under the new deal, the amount of Australian content will be agreed upon for each stage of work to ensure the 60 per cent target can be achieved for the most expensive defence project in the nation’s history.

The Sydney Morning Herald and The Age revealed on Tuesday the Morrison government was also verging on another critical breakthrough, with the government and Naval Group close to agreeing on a plan for the next two-year phase of the project.

After reports Australia was willing to walk away from the multibillion-dollar deal, the two developments all but lock in the French company to building 12 new attack submarines to replace the ageing Collins-class fleet.

The Morrison government had grown increasingly concerned about cost blowouts, schedule slippages and commitments to use local contractors and Prime Minister Scott Morrison in recent weeks tasked two senior navy officers to look at alternative options for the submarine fleet, but senior government sources dismissed the likelihood of it walking away from the French build.

A Defence spokeswoman said the commitment made by Naval Group and the French Minister of the Armed Forces, Florence Parly, to spend a minimum of 60 per cent of the contract value in Australia over the life of the program, will be implemented through a formal amendment to the Strategic Partnership Agreement “that maintains the balance between incentives and remedies that apply across the Agreement”.

Naval Group last week submitted its revised plan for the next phase of the program, which was developed in consultation with Defence officials after the government rejected its original offer. The plan still needs to be ticked off by the Morrison government.

Defence said it will now ensure the offer “adequately covers all work required to progress the program to schedule, including development of the workforce and training, while also achieving value for money”.

Opposition defence spokesman Brendan O’Connor said the Morrison government had gone from promising contracts would be signed to “threatening to walk away from the biggest procurement project in Australia’s history”.

“A deal is still not done and Labor has concerns that the Morrison government will use tricky accounting to achieve this new target of ‘60 per cent local spend’,” he said.

“This whole debacle happened because the government timed their announcements based on election cycles not the strategic security needs of Australia.”

The Sydney Morning Herald and The Age last year revealed Defence officials knew the attack-class submarines would cost almost $80 billion as early as 2015 – before Naval Group was chosen – despite publicly stating at the time the estimated price tag was $50 billion. The estimated cost has since increased to about $90 billion.

The first submarine is not expected to be in service until the mid-2030s.