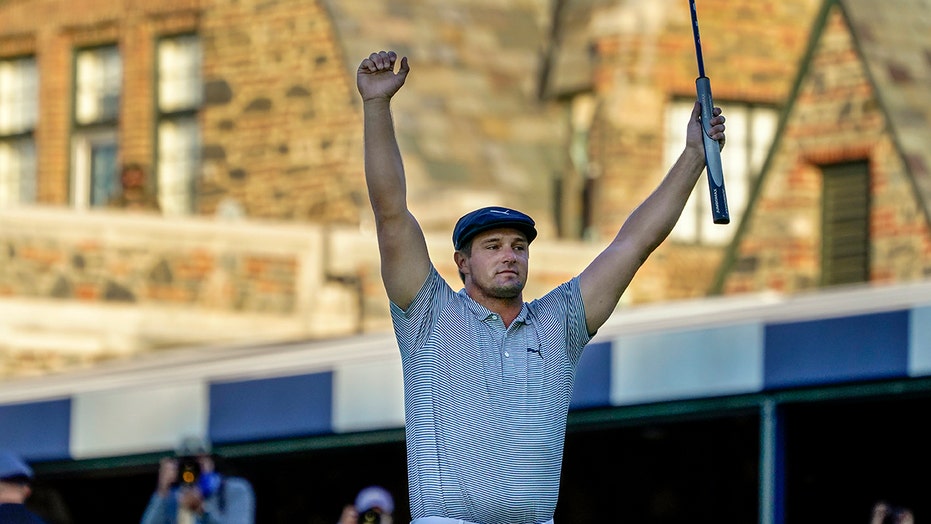 The scene was straight out of the World Long Drive Championship spectacle. Bryson DeChambeau would consider that a compliment.

He took a slow practice swing, then the next one at full force. Eyes focused, deep breath, chest fully expanded, exhale. Another violent practice swing. And another. Just then, a leaf blew in front of his ball. He stooped over to flick it away, and started the routine over until he was ready to smash his tee shot at the TPC Summerlin in Las Vegas.

DeChambeau walked over to his bag, removed a wrench and tightened the screws on the bottom of his driver.

Joaquin Niemann couldn’t suppress a smile as he watched this unfold. It was worth the wait. The golf ball came off the club at 198 mph. It hit a small tree right of the fairway, dropping straight down and robbing DeChambeau of what he figured would have been a 400-yard drive.

Moments like these are why DeChambeau is the talk of golf going into the Masters.

It has been this way since golf returned in June from the COVID-19 pandemic and DeChambeau showed up with his incredible bulk, more than 40 pounds of muscle and mass, all to support a swing that his producing prodigious shots. He has driven into groups on the green on a par 4. He powered (and putted) his way to the lowest score ever at Winged Foot to win the U.S. Open by six shots.

And he says he is just getting started.

“He went to the nth degree of everything we have available to us — science, TrackMan, biomechanics, everything,” Rory McIlroy said. “Now that we have all that, Bryson is the personality that goes down that rabbit hole more than anyone else. I think that’s credit to him. He’s worked his (tail) off and it’s paying off hugely.

“He’s definitely the most talked about man in golf right now.”

Next stop: Augusta National, where DeChambeau hopes to unveil a 48-inch driver, the legal limit typically seen only in long drive competitions.

That’s where this latest experiment all began. It was a year ago in September when DeChambeau watched Kyle Berkshire win the World Long Drive Championship with his final blast that carried 400 yards.

“The real light-bulb moment,” DeChambeau said. “I said, ’If I could do that and hit it straight, what would happen? 'That was the question that inspired me to go down this road.”

Berkshire said he has never met DeChambeau in person, only over the phone to share ideas — DeChambeau wants power, Berkshire is trying to get back toward tournament golf. He believes DeChambeau is headed done the right path with his program and his relentless passion to think outside the box.

And he thinks it’s a path others will have to follow.

“It’s exciting to see what he’s doing, but not surprising,” Berkshire said. “This will be the new norm. When someone does something that threatens your living, it’s a scary thing. It’s scary when you’re being outhit by 50 yards.”

McIlroy noticed that when golf returned at Colonial in June. He was paired with DeChambeau in the final round, and said there were times he and caddie Harry Diamond couldn’t believe what they were seeing.

McIlroy wasn’t banking on Winged Foot until DeChambeau did something so crazy it made perfect sense. With the fairways tight and firm, the analytics suggested even playing less club off the tee wasn’t going to assure keeping drives in the short grass. So why not hit it as far as possible? It helped that he had a great week with his irons.

As for Augusta National?

DeChambeau didn’t want to reveal too much but he already has singled out a half-dozen holes where he could have a massive advantage. He has even talked about taking his drive on the par-5 13th over the pine trees and into the 14th fairway (which would be easier without spectators there). Some of the par 5s would leave him a wedge into the green, not to mention some of the tougher par 4s.

And that’s without a 48-inch driver.

“If he can get the 48-inch driver, he will shoot 20 under or better. It’s going to be a slaughter,” Berkshire said. “He could force a lot of things to change.”

The R&A and USGA are closing in on a comprehensive study on distance and how it affects the game. The public has focused on equipment. Often overlooked is what the governing bodies mentioned in their Joint Statement of Principals” in 2002 when it warned of the impact on increased distance — equipment, sure, along with “greater athleticism of players.”

That’s where Greg Roskopf comes in.

Roskopf, who works with Denver Broncos and developed Muscle Activation Technique, began working with DeChambeau three years ago for back and hip issues. Then, they took fitness and training and nutrition to another level about 18 months ago. The sessions allow DeChambeau to increase his strength and body mass without losing range of motion.

It takes enormous work, and DeChambeau has never shied away from that.

“His body had to tolerate what he was doing,” Roskopf said. “We would load his body to the point of failure. An uncontrolled environment would have negative effects. We reactivated (his muscles) after overload to make him stronger. We’ve seen some amazing changes.”

The size stands out. DeChambeau drinks about seven Orgain protein shakes a day (he had one walking down the 15th hole at Winged Foot) and various estimates have put his caloric intake between 3,500 and 5,000.

“In my 30 years in sports, I haven’t seen gains I’ve seen in him," Roskopf said.

All for power. All for speed. All for distance.

He won in Detroit in his fourth tournament since the restart. The real validation came from his U.S. Open victory. And now he goes to the Masters as the betting favorite in a year in which five players other than DeChambeau have reached No. 1 in the world, and Woods is the defending champion.

“You have to hand it to him,” Jordan Spieth said. “He’s found a way to change the game right now.”