Home » Lifestyle » Curtis Stone: ‘As a chef, I feel my mum’s work influences what I do’ 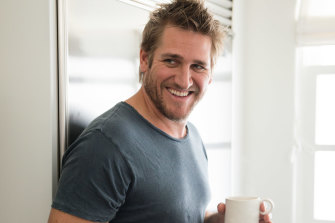 Both of my grandmothers were such a huge influence on my life that I named two restaurants in
Los Angeles after them – [Michelin-starred] Maude in Beverly Hills and Gwen in Hollywood.

My paternal grandmother, Maude, lived in Melbourne and we’d go to her place after school. She taught me how to play tennis and cards. She was a funny old bird. Born in Yorkshire, she moved to Australia as a kid and I was always fascinated to hear her stories. She was a plain eater – couldn’t get past the roast meat and vegetables, and could cook a mean Yorkshire pudding. She loved her potatoes, too, and my dad [Bryan] is very similar.

My maternal grandmother, Gwen, loved being in the garden. She grew up in country Victoria and spent most of her life on a farm near Kyneton – I’d go to her place and have that country experience. I loved getting away from the city and spending time there. She was very nurturing and made amazing shortbread biscuits.

My mother, Loraine, worked as a florist and ran her own business for many years. She raised us as a single mum, but always managed to have a good relationship with my dad, even though they separated when I was two. He was involved in our sports on the weekends and my parents made sure they kept a decent relationship for the sake of us kids.

Mum didn’t have a nanny or housekeeper to help her raise my brother, Luke, and me. I don’t know how she made it all happen but she did. She’s a strong and powerful figure in my life.

I get my silly sense of humour from Mum – she always taught me the value of being able to have a good laugh. She lives on the Bellarine Peninsula in Victoria and Luke actually took over her florist business before he moved to LA to help me run Gwen.

As a chef, you do have to think about composition, decoration and arrangement on a plate. So whether I’m setting up a restaurant or plating up a meal, I feel my mum’s work influences what I do.

I went to Essendon Grammar, an all-boys school, so girls weren’t on my radar during the day. Penleigh Girls Grammar was our sister school and I did fancy a girl there.

It started out as a crush from afar and eventually I managed to get her phone number. It was back in the day when you had to ring a landline, which meant I spoke to her mum and dad before they put her on the phone.

We would hang in the local area in Keilor together. That’s when I had my first kiss. We splintered off from a group of our friends to have a quick pash in the park. I was around 14.

I was 16 when I had my first relationship with a girl. I didn’t consider myself one of the lads, but
I did like having a girlfriend.

I had a massive crush on Tina Turner when I was a teenager. I had posters of her on walls in my bedroom.

I had a couple of more serious relationships in my 20s, but nothing lasting longer than two years. I also went travelling through Europe with a friend. I enjoyed being single and free.

I got a job with Marco Pierre White for eight years in his restaurant in London. I didn’t really have the work-life balance figured out and was doing 60 hours a week in the kitchen. It sort of meant that being solo was the only way to go. I didn’t mind.

I met my wife, Lindsay [Price], in my mid-30s when I was living in LA. It was set up as a blind date by mutual friends – my mate told me I had to meet her. I saw a photo of Lindsay and thought, “Wow, she looks beautiful. I’d be mad not to go.”

Lindsay has her own career and she understands the crazy nature of my business, too. She’s very career-driven and I quite like that about her. We are not in each other’s pocket all the time, which also helps our relationship. She’s a California girl who likes the surf. She is a super-kind, sweet and emotional person who really considers everyone’s feelings.

Lindsay and I married in 2013 and have two children – Hudson, who’s eight, and five-year-old Emerson.

She’s a great mother to our sons. She tries to help the boys with their emotions, sit down with them and get them to speak up. I sort of have the opposite approach and tell the boys to suck it up! I think it’s great Lindsay brings the boys more in touch with how they’re feeling. We’re a good balance.

Curtis Stone is a Coles ambassador.

This article appears in Sunday Life magazine within the Sun-Herald and the Sunday Age on sale March 1.