A couple quit their high-pressure jobs to live with their daughter and dog in the back of a VW van.

Robert Bambach, 40, grew tired of the 4am starts and 16-hour days he worked as a construction manager in London, and frustrated at the lack of time he was spending with his wife Renata, 42, a carer, and their daughter Ricarda, 15.

Despite earning £55,000-a-year, Robert decided he was ready to give it all up to head out on the road with his family and their beloved golden retriever, Charlie.

After selling their three-bedroom family home in Birchington, Kent, for an undisclosed amount in December 2018, the Bambachs spent nine months criss-crossing the UK in their £6,5000 Volkswagen Crafter.

In August 2019 they bought a plot of land near Castelo Branco in central Portugal, again for an undisclosed amount, and upgraded to a larger caravan where they live on a permanent basis.

The family live on the proceeds of their house sale and keep outgoings down to just £210 a month using solar panels and growing their own food. 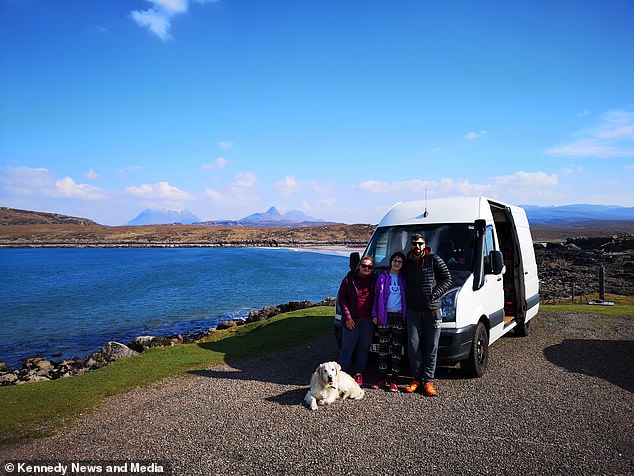 Robert Bambach, 40, and wife Renata, 42, quit their high-pressure jobs in London to live in a van with their daughter Ricarda and their dog Charlie. Pictured, the family near Glencoe, Scotland, during the nine months they spent travelling the UK last year 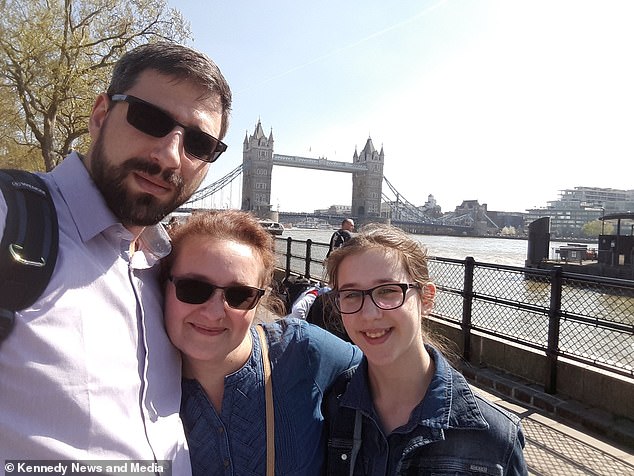 Robert was earning £55,000 a year as a construction manager but was fed-up with the 4am starts and 16-hour days. Pictured, with Renata and Ricarda in London before their adventure 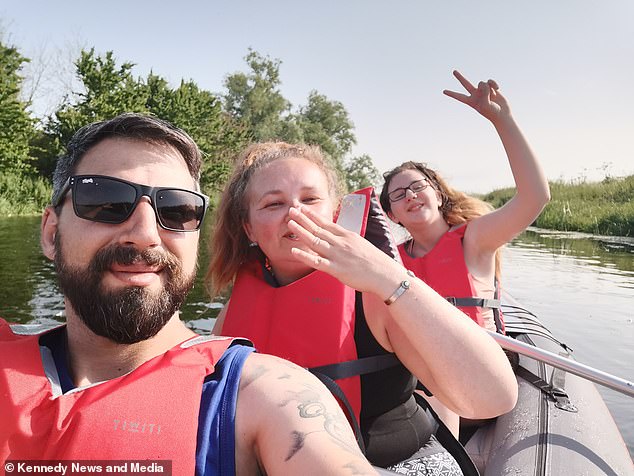 The family set off in a £6,500 van in December 2018 and spent nine months travelling the UK before buying a plot of land in Portugal in August 2019. Pictured, on a canal near Bournemouth

Robert and Renata said they have never been closer and that the experience has given them the quality family time they so craved in London.

Robert said: ‘It’s a 180-degree turn [from the UK]. That wasn’t a life, we weren’t enjoying family time.

‘Even the house was like a hotel – coming in, having something to eat, having a shower and going to bed, that’s it. The next day it was the same thing all over again.

‘I had loads of sleepless nights just because I received an email before I went to bed and my mind wouldn’t stop going.

‘At the end of the day I was working all those hours to pay for a house and everything in it – cars, insurance – but not enjoying them.’

The couple spent the first nine months travelling around the UK, which saw them rising to sunrises in Welsh forests and meandering through stunning Scottish scenery.

Ricarda was homeschooled by her mother, doing a few hours of lessons each day alongside activities like hiking and kayaking. 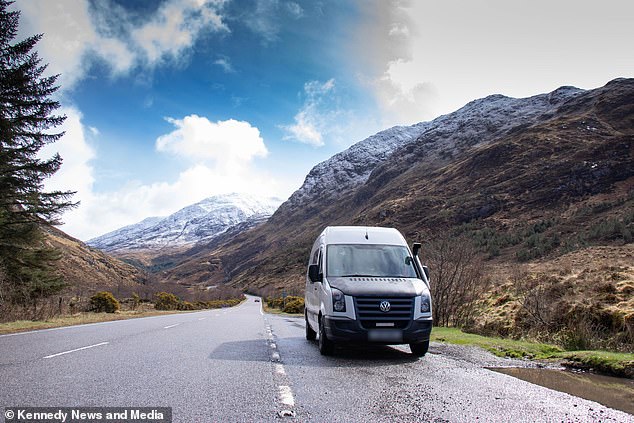 The family found they were not spending enough time together living their busy London lives and headed off on an adventure. Pictured, the Bambachs’ van in Glencoe, Scotland 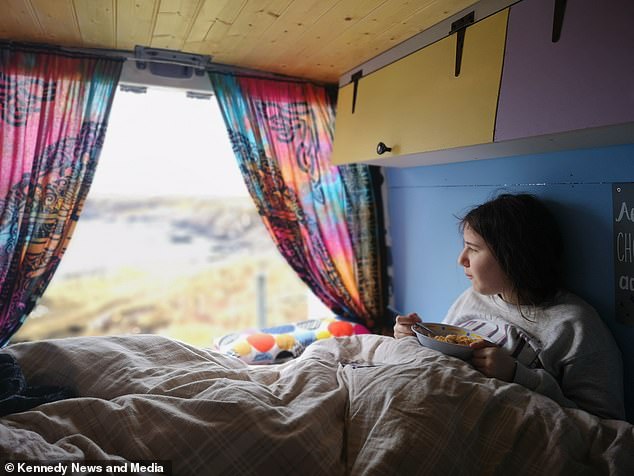 The parents are also spending more quality time with their daughter Ricarda, 15, who had become withdrawn while living in the UK. Pictured, enjoying breakfast in the back of the van 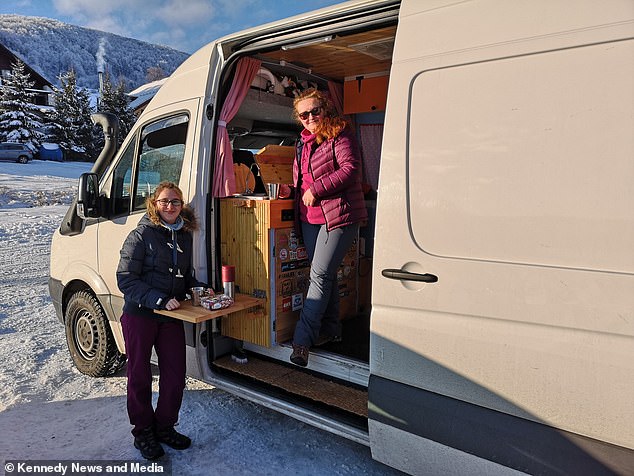 Ricarda and Renata at a ski resort near Brasov, Romania, in Christmas 2018. The family have slashed their household bills from £2,500 a month in London to a mere £210 in Portugal 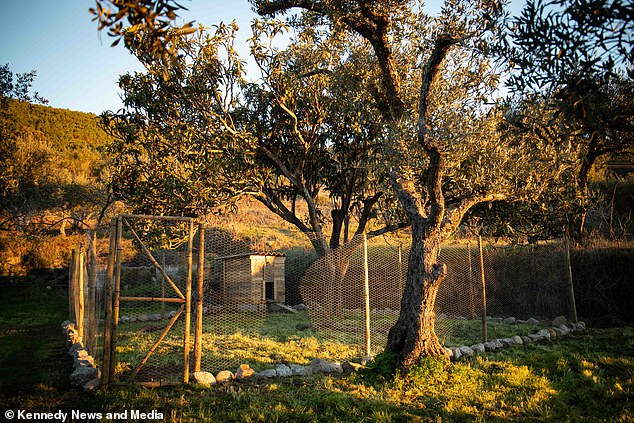 The family save money by growing their own vegetables and looking after chickens. Pictured, the chicken coop on the family’s plot of land in the Portuguese countryside 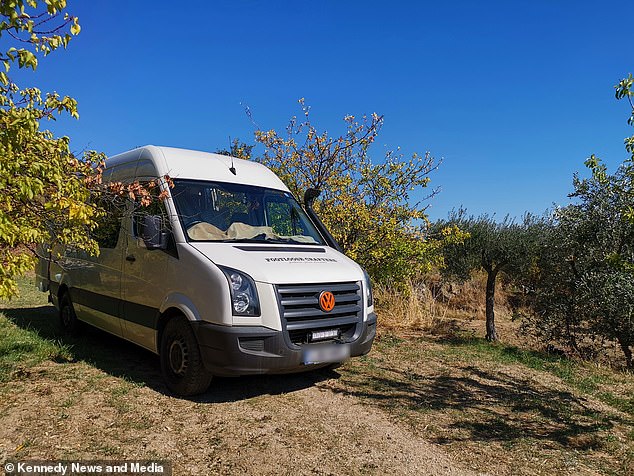 The family continued living in the van in Portugal before swapping for the cararvan to give themselves more space. Pictured, the van parked on their picturesque plot in Portugal

By August 2019, the family had bought a four-acre plot of land in central Portugal so they could have a permanent based.

The family have seen their household outgoings slashed from £2,500 a month in London to a mere £210 – by growing their own vegetables, raising chickens, picking wild fruits and making their own wine, marmalade and olive oil.

Most meals are cultivated from the property and the £210 a month is spent on wi-fi, Ricarda’s bus pass, and items like milk, bread, gas, and car insurance.

While neither Robert nor Renata currently works, Robert said he would find himself a job if he needed to.

Last October, the parents upgraded from the van to a caravan to give Ricarda and Charlie more space.

The caravan runs on solar panels, which the couple claim generate enough power to charge multiple phones and laptops even in the dead of winter. 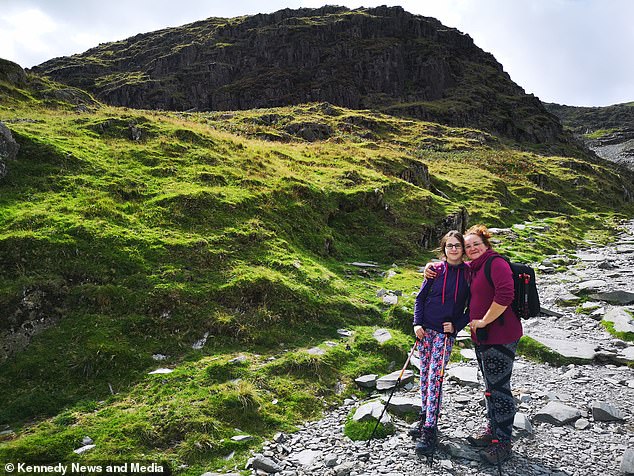 Though there’s a great deal of work to be done every day, Robert and Renata insisted they find it liberating.

Robert said: ‘We have a really nice view. We wake up, have a cup of coffee and watch the sun rise over the valley.

‘It makes such a big difference, you don’t have any stress at all. You wake up and think, what should we do today?

‘Obviously there’s a long list and we just pick randomly and we do it. We get on with it, get it done, stop for a cup of tea then go back to work.

‘It’s hard work, don’t get me wrong, but it’s so rewarding, like seeing the potatoes and peas coming up – it’s just the little things in life that make you happy.’ 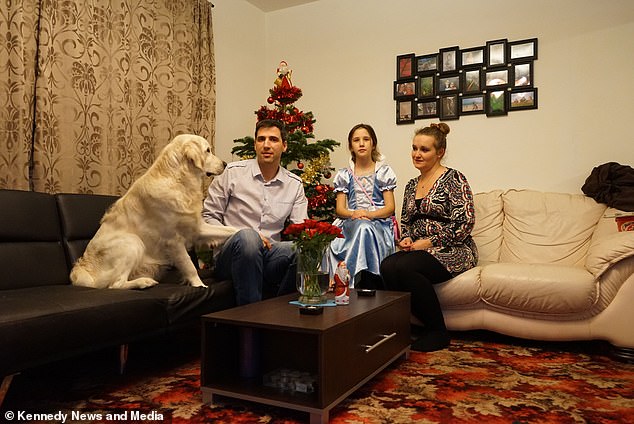 Robert and Ricada found they weren’t spending enough time together in the UK. Pictured, the family pose for a photo with their beloved dog Charlie in Christmas 2015 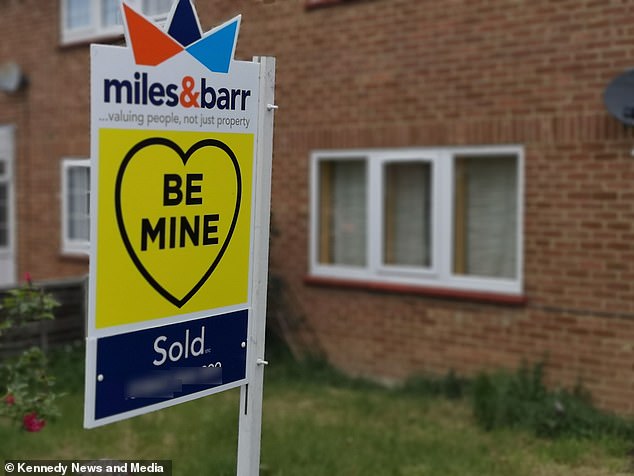 The couple sold their three-bedroom home in Kent, pictured, for an undisclosed amount 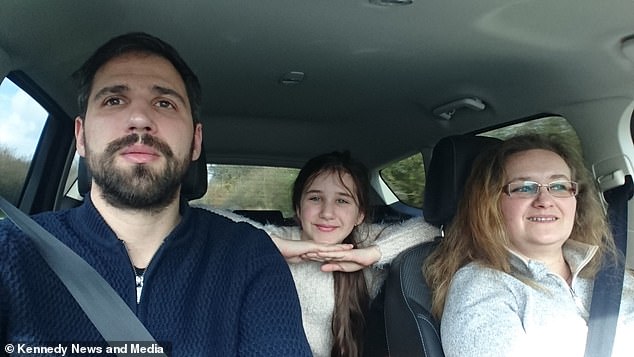 The family now get on better than they did in London. Pictured, on a daytrip in their Ford Cougar before they got the van

Previously Renata, a carer for the elderly, spent days and evenings with clients and Ricarda was in school, leaving Charlie to roam the empty rooms on his own.

Renata said: ‘It was horrible. Since we had Ricarda we always had to work. We had to work different hours, too, so almost all our married life we were apart.

‘We said we’ve been married for 18 years but if we put all the hours we’d spent together I don’t think we’d have five years where we’d actually been together. 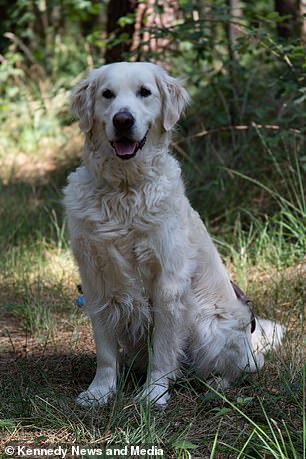 Charlie the dog gets more attention on the road. Pictured, in France en route to Portugal

‘So we said, you know, let’s make the most of it now [while] we can still do the work on the land which is quite demanding.’

Mum Renata was also increasingly worried about Ricarda, then 14.

She claims the teen’s classmates brought knives to school and would watch violent videos of kids fighting each other.

Renata said: ‘Here Ricarda’s happier, she’s talking more. She used to come home from school and close herself in her bedroom. We barely saw her in England, she wasn’t happy. She was very introverted, closed in on herself.’

Ricarda takes the public bus to a nearby Portuguese school, where her parents say she is thriving despite the language barrier.

Next-door neighbours taught the novice homesteaders how to work their land, make wine and even offered use of their pizza oven for bread-making.

The once estranged couple, who now spend ’24-7′ together, claim they haven’t had an argument since the big move.

Renata even believes taking ‘a good long walk’ around their extensive property would easily diffuse a hypothetical row. 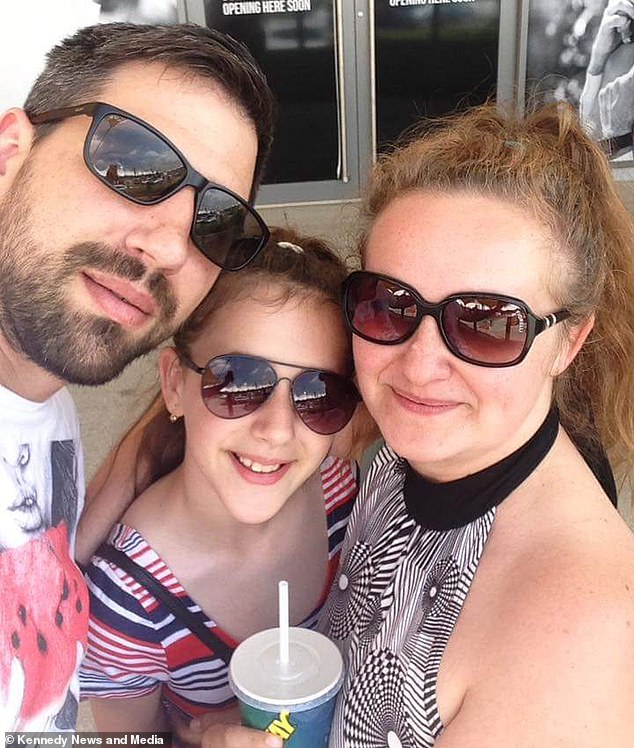 The family at Ashford Designer Outlet, in Kent, before their bold decision to leave the UK

She offered advice for anyone who might be afraid to risk transplanting their lives.

Renata said: ‘Don’t think about it, just do it. The thing is it’s very scary, because you had a comfortable house, you had everything you wanted and all that, and you’re jumping into the unknown.

‘But if you live your life thinking, ‘oh, I’m scared to do it’ you will never have the chance to actually see that you are able to succeed.’