A woman who married her husband for the second time last year after his dementia made him forget their first wedding has revealed how they have enjoyed a  ‘miraculous’ honeymoon period.

Anne Duncan, 70, who lives in Aberdeen, has been with her husband Bill, 72, for almost 20 years and have been married for 13 of those years, but his dementia means he has forgotten much of their life together.

Last year, she was stunned when her husband told he wanted to be with her forever, with the couple ‘marrying’ in a ceremony in their garden two days later.

Speaking to the Real Fix podcast, Anne has now revealed that the pair experienced a ‘miracle’ second honeymoon period after the wedding, saying: ‘We had what I called “the wedding affect”, which lasted about six weeks…

‘And I would say to him “Bill, can you remember I’m your new wife?” and he would just hug me and pat me on my back and shower me with kisses.’ 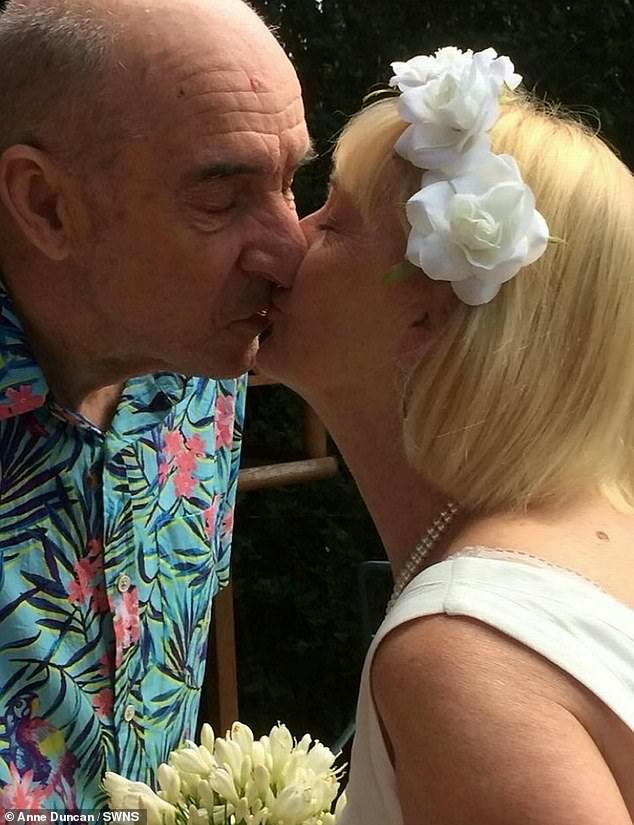 Anne Duncan, 70, (pictured right) has explained how she and her husband Bill, 72, (left) have gone through a second honeymoon period after getting married for a second time 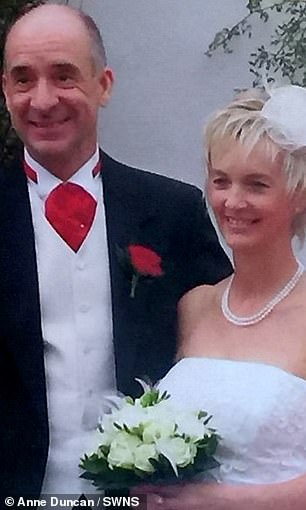 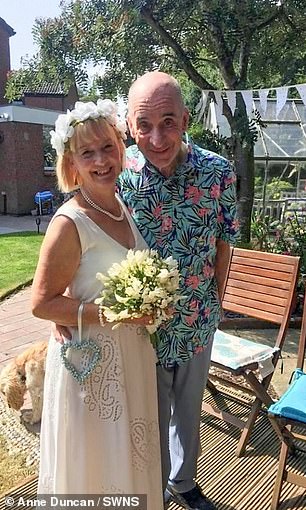 Bill and Anne originally married in 2007 (left) and after Bill re-proposed to his wife, they re-married in a ceremony in their garden in August 2019 (right)

The couple originally met in 2001 when Bill worked as an entertainer and magician and they first tied the knot in 2007 and went on to have a daughter called Andrea.

Three years after their first marriage Anne noticed that Bill was behaving differently and had started forgetting things.

A visit to the doctor confirmed that Bill had dementia and ever since, Anne has been taking care of him.

However, last year, Bill proposed to Anne for the second time after becoming convinced that she was his new girlfriend. 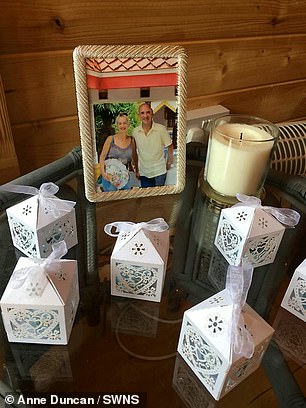 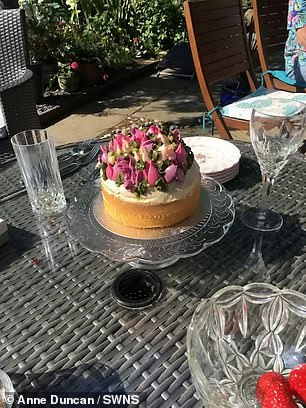 Speaking on the podcast, Anne revealed Bill was smitten with her and asked repeatedly when they could marry each other.

She explained: ‘He absolutely hasn’t known my name for a long time. He always used to call me darling anyway. But all that had gone over the last 12 months.

‘So this is why this was so unexpected and so amazing. So I just said “ok, that would be lovely Bill”. And he said “ok, well when can we do it?”

‘I said, “Well the girls are coming around on Saturday, do you want to do it then?” and he said yes. 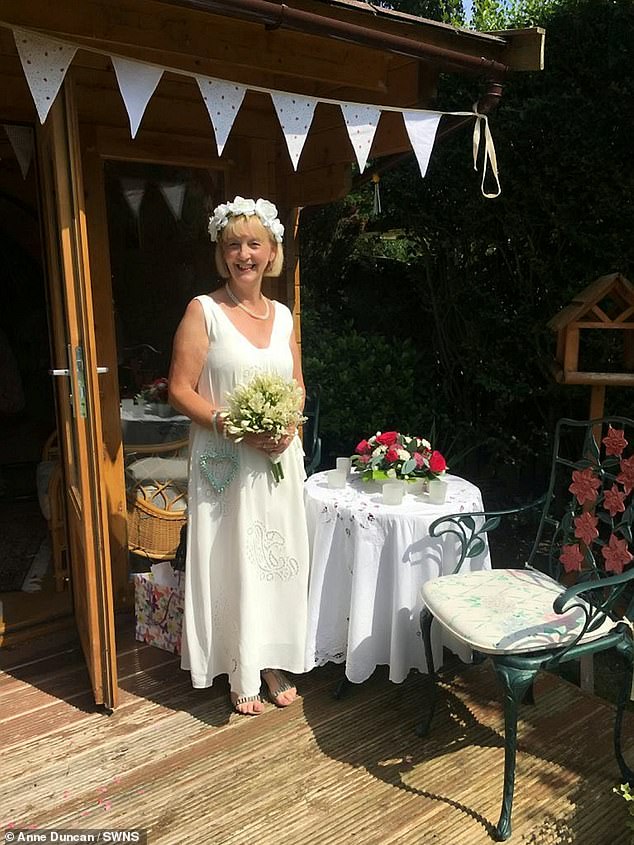 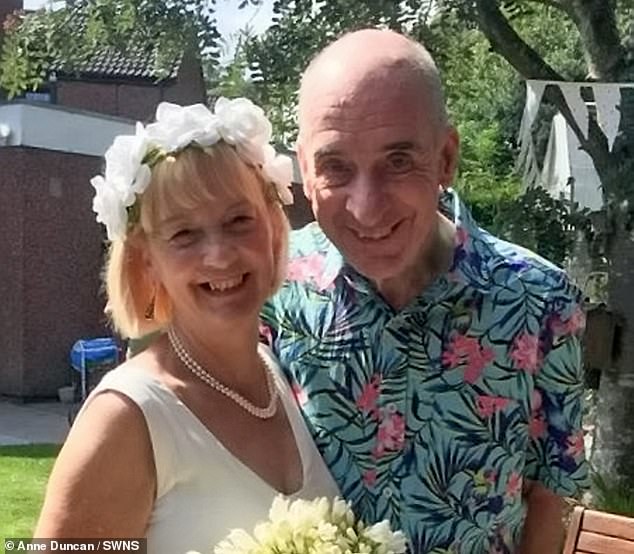 ‘It really and truly was the most beautiful and unexpected event ever.’

However despite Anne thinking Bill would forget all about the proposal, he went on to ask her every day until they re-tied the knot in August 2019.

Anne said: ‘We’d been to a family member’s wedding earlier in the month, and clearly it touched Bill as he turned to me not long after and said that he wanted to be with me forever.’

The couple re-married in front of friends and family and Anne walked down the aisle to the couple’s original wedding music. 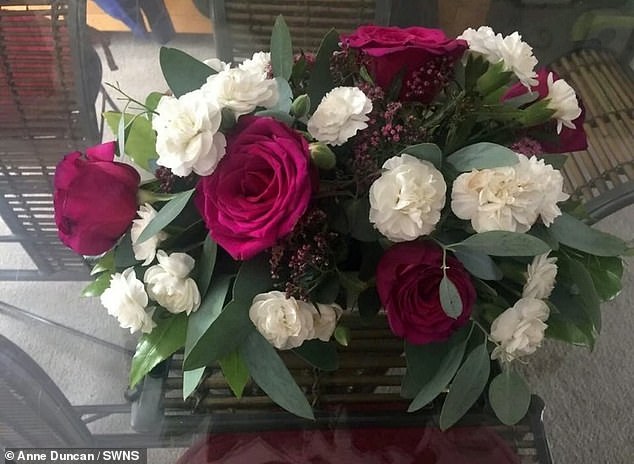 Anne said that Bill had no idea they were already married and that the fact they got re-married was ‘nothing short of a miracle’.

Following their wedding, which was carried out in their garden, Anne said that the pair experienced a second honeymoon period.

‘We had what I called ‘the wedding affect’, which lasted about six weeks.

‘Most people thought it would last a few days at the most, and it didn’t; it lasted about six weeks.’

She continued: ‘It was just a completely unexpected wonderful miracle.’

Dementia is an umbrella term used to describe a range of progressive neurological disorders, that is, conditions affecting the brain.

There are many different types of dementia, of which Alzheimer’s disease is the most common.

Some people may have a combination of types of dementia.

Regardless of which type is diagnosed, each person will experience their dementia in their own unique way.

Dementia is a global concern but it is most often seen in wealthier countries, where people are likely to live into very old age.

How many people are affected?

Alzheimer’s Research UK reports there are more than 850,000 people living with dementia in the UK today.

It is estimated that the number of people living with dementia in the UK by 2025 will rise to over 1 million.

In the US, it’s estimated there are 5.5 million sufferers. A similar percentage rise is expected in the coming years.

As a person’s age increases, so does the risk of them developing dementia.

Rates of diagnosis are improving but many people with dementia are thought to still be undiagnosed.

Is there a cure?

Currently there is no cure for dementia but new drugs can slow down its progression and the earlier it is spotted the more effective treatments are.