Australia's participation at next month's Fed Cup finals has been put on ice after world tennis chiefs postponed the event in Hungary over coronavirus fears.

Alicia Molik's team were a seeded country as a result of being last year's beaten finalists and were drawn in group B against Belgium and Belarus in the group stage for this year's competition. 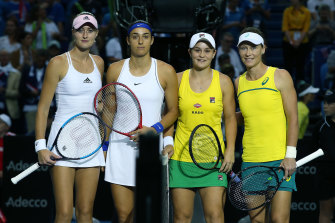 France and Australia played in last year’s Fed Cup finals. Qualifiers have been postponed due to coronavirus.Credit:Getty Images

The ITF said it was committed to holding the finals at some point in 2020.

The finals were also a scheduled Tokyo Olympic qualification event.

In addition to the Fed Cup finals, the Fed Cup play-offs due to take place on April 17-18 in eight locations around the world have also been postponed and alternative dates in 2020 will be announced at a later date.

No fans for Warriors-Nets clash

The Golden State Warriors will play their Thursday (US time) home game without spectators because of concerns about coronavirus, the San Francisco-based NBA team said.

The decision was announced shortly after the city and county of San Francisco announced a two-week ban on gatherings of more than 1000 people in a bid to slow the spread of the virus. 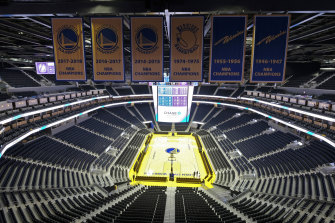 Golden State will play an NBA game in an empty stadium.Credit:AP

After hosting the Brooklyn Nets on Thursday, the Warriors will play their next five games on the road before returning home to face the Atlanta Hawks on March 25.

"Due to escalating concerns about the spread of COVID-19 and in consultation with the City and County of San Francisco, the Golden State Warriors announced today that tomorrow night's game vs the Brooklyn Nets at Chase Centre will be played without fans," the team said in a statement.

The number of US coronavirus cases has risen steadily and affected almost three-quarters of the states. More than 1025 cases and 28 deaths have been reported, according to a count by Johns Hopkins University.

"We will continue to monitor this evolving situation closely to determine next steps for future games and events," the Warriors said. "We appreciate the understanding and patience of our fans, guests and partners during this unprecedented time."

Borussia Moenchengladbach secured a narrow 2-1 win over Cologne on Wednesday in the first Bundesliga game to be played in front of empty stands due to the outbreak of the coronavirus.

Breel Embolo slotted in on 32 minutes and an own goal from Jorge Mere from an Embolo effort in the 70th doubled Gladbach's lead in a ghostly atmosphere at their cavernous Borussia Park stadium that is normally pulsating with crowds of 55,000.

Cologne pulled a goal back in the 81st through Mark Uth to inject some tension into a game that obviously lacked in atmosphere. 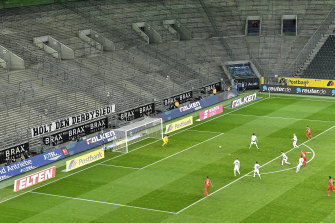 The first Bundesliga game to be held without fans: Borussia Moenchengladbach v Cologne.Credit:AP

"The absence of fans had a massive effect," referee Deniz Aytekin told Sky. "It was difficult to remain focused throughout. I hope this is not a long-term thing. Without fans it is not even worth half as much."

Several thousand Gladbach fans had gathered outside the stadium and lit flares to celebrate.

The Seattle Mariners and San Francisco Giants will be forced to postpone or relocate games scheduled at their home stadiums this month, or play them without fans, after government officials banned large public gatherings.

The announcements moved the impacting of Major League Baseball regular season games from the realm of the theoretical to that of the actual, and could soon be followed by more teams being forced to alter plans as coronavirus continues to spread.

The Mariners were due to open the season with a four-game series at home against the Texas Rangers on March 26, which is opening day across baseball, followed by a three-game series against the Minnesota Twins.

MLB officials said Tuesday the league prefers games to be relocated – to venues away from major coronavirus outbreaks – rather than played in empty stadiums.

The Giants, meanwhile, open the regular season on the road, but will relocate their March 24 exhibition game against the Oakland A’s – previously scheduled to be played at their home stadium of Oracle Park in San Francisco – possibly to their spring training home in Scottsdale, Arizona. The Giants’ home opener is scheduled for April 3 against the Los Angeles Dodgers.

The world figure skating championships, scheduled to be held in Montreal from March 16-22, have been cancelled because of the coronavirus outbreak, the Quebec government said.

The decision to cancel the world championships comes a day after the International Skating Union announced strict requirements for attending the event, including monitoring temperatures of skaters, coaches and officials.

It also marks the second major sporting event affected in Canada in recent days because of the coronavirus. The women's world ice hockey championship, which was set to begin on March 31 in eastern Canada, was cancelled last Saturday.

Canada has a total of 102 confirmed cases of coronavirus as of Wednesday, with Quebec having a total of eight cases.

Two more golf tournaments have been postponed as fears over the coronavirus outbreak continue to wreak havoc with the European Tour schedule.

Next week’s Hero Indian Open and August’s Czech Masters have joined this week’s Kenya Open and April’s Maybank Championship and China Open in falling victim to concerns over the spread of Covid-19.

With no regular European Tour events scheduled in the fortnight before the Masters, it means an eight-week gap between the staging of the Qatar Masters in Doha and the next regular event in Spain.

The reduction in the number of tournaments could have a significant impact on qualifying for other events, most notably the Ryder Cup, as well as the Race to Dubai standings which determine which players keep their card for next season.