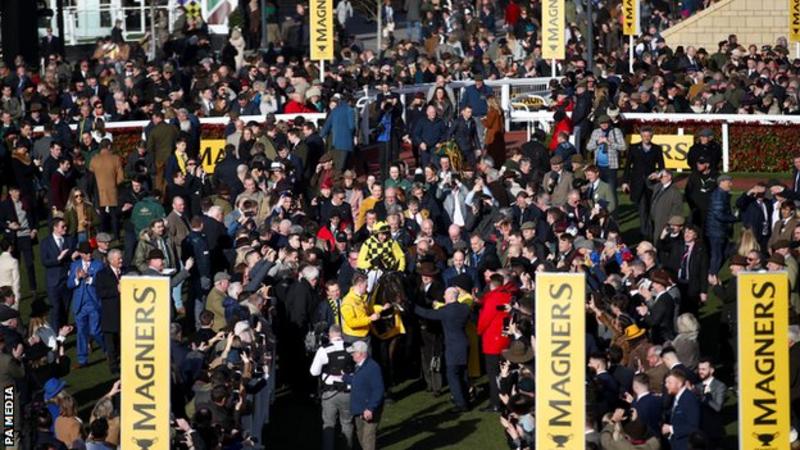 All horse racing in Great Britain will be suspended from Wednesday until the end of April because of the coronavirus outbreak.

On Monday, it was announced that racing would continue behind closed doors, although the Grand National meeting was cancelled.

Tuesday’s meetings at Wetherby and Taunton go ahead without spectators.

The British Horseracing Authority (BHA) said the decision will be kept under “constant review”.

Nick Rust, the chief executive of the BHA, said: “This is a national emergency the like of which most of us have never seen before.

“We’re a sport that is proud of its connection to rural communities and to the local businesses that support our industry. But our first duty is to the health of the public, our customers and to racing industry participants and staff so we have decided to suspend racing following the government’s latest advice.”

Racing in Ireland continues, albeit behind closed doors, with the Irish Grand National meeting planned for 11-13 April and the Punchestown festival still scheduled to start on 28 April.

However, America’s Kentucky Derby has been rescheduled from 2 May to 5 September.

It will be the first time for 75 years, since the Second World War, that the event is not staged on the first Saturday in May.

Known as the ‘Run for the Roses’ the Kentucky Derby is followed in US racing’s ‘Triple Crown’ by the Preakness Stakes and Belmont Stakes, which are also set to be postponed.

Racing had been soldiering on while other sports came to a halt and it managed to get the showpiece Cheltenham Festival completed.

But after the recommendations about non-essential contact, the Grand National was cancelled and it was probably inevitable that this news would follow.

Though racing is, like other sports, “only” a sport, concerns are perhaps higher than elsewhere as it is believed that either directly or indirectly it employs up to 100,000 from stud farms to horse transporters to casual workers on a race-day, on top of the more obvious jockeys, trainers, bookmakers etc.