The coronavirus outbreak is bringing the sporting world to a standstill with the Dutch Grand Prix set to be the next race pulled from Formula One's schedule as the Sheffield Shield season was also impacted.

There were conflicting messages as to when the new F1 season might start after this weekend's opener in Australia was cancelled, with subsequent races in Bahrain, Vietnam and China postponed.

It is understood that the Dutch round – scheduled for May 3 – will be postponed. 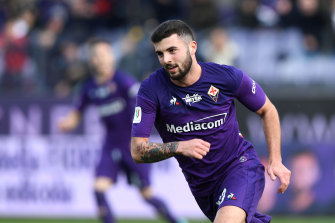 The Genoa-based club said they would not comment on cases at the club anymore.

Fiorentina said Pezzella, 28, and Cutrone, 22, were both tested after showing "some symptoms" of the illness along with physiotherapist Stefano Dainelli, who also tested positive.

"They are all in a good state of health in their homes in Florence," the club said in a statement. Their teammate Dusan Vlahovic tested positive on Friday.

Fiorentina's most recent opponents were Udinese, who have suspended training and said that their squad will remain in self-isolation until March 22.

The Chinese soccer team that was originally stuck in Spain because of the coronavirus outbreak is going back home to try to avoid its rapid spread in Europe.

Wuhan Zall was expected to return to China on Saturday, nearly one-and-a-half months after they arrived in Spain for pre-season training.

The team initially planned to leave Spain mid-February but had extended their stay in the southern region of the country until at least the end of March.

That plan changed this week because of the sharp spike in the number of cases in Spain and Europe generally.

WTA yet to make the call on claycourt season

The Women's Tennis Association may seem out of step with other sports bodies in stopping short of a wholesale suspension to its calendar but says it is to give itself more time to make informed decisions amid the coronavirus pandemic.

The ATP suspended its professional men's tennis tour for six weeks on Thursday before the International Tennis Federation (ITF) postponed all its events until April 20.

The WTA, which runs the women's tour, initially said it would not follow the ATP before cancelling tournaments in Charleston, Guadalajara and Bogota.

The ITF also suspended the revamped version of the Fed Cup Finals – the equivalent of the men's Davis Cup – scheduled for Budapest in April, while this month's Indian Wells tournament in Southern California was cancelled at the last minute.

The next WTA tournaments start on April 20 in Stuttgart and Istanbul, marking the start of the European claycourt season.

"We are in very active communications with the European claycourt events and the grasscourt events," the WTA added.

"We believe it is prudent and respectful to move rapidly but at the same time to not simply react, to take the necessary time to look at and evaluate the European swing in the week ahead and have the proper conversations with our tournaments and players before making that decision.

"We expect to make our decision in the week ahead."

UFC goes ahead behind closed doors

Even though Saturday's UFC mixed martial arts event in Brazil still went ahead it was against a backdrop of eerie silence in an empty arena.

With the local government in Brasilia having banned large gatherings in an effort to contain the spread of the coronavirus, the world's biggest mixed martial arts promotion held 12 bouts with only the fighters, their camps, the television production crew and a few dozen essential personnel inside the arena.

While speculation regarding the likelihood of this summer's Olympics going ahead remains rife, Japanese Prime Minister Shinzo Abe said the country is hopeful of hosting the event “without a hitch”.

The Tokyo Games are due to take place between July 24 and August 9.

Major American sports have had their seasons suspended with the NBA and NHL in lockdown while Major League Baseball will delay its 2020 season's opening day of March 26 by at least two weeks.

The ODI cricket series between Australia and New Zealand has also been postponed after tighter travel restrictions imposed due to the coronavirus outbreak.

Cricket Australia have since cancelled the final round of the Sheffield Shield season with a decision as to whether the March 27 final goes ahead to come in due course.

The Super Rugby season has been suspended after the decision of the New Zealand government to quarantine people entering the country for 14 days.

In rugby league, Leeds revealed the player who had been showing symptoms of possible coronavirus had tested negative for the disease.

The Welsh Rugby Union suspended the community game in Wales from Saturday evening until March 30, and rugby league activity in Wales has been suspended until the end of March.

World Triathlon announced the suspension of all races and activities until the end of April – shortly after Britain's Vicky Holland claimed victory in the Mooloolaba World Cup event in Australia.

Meanwhile, there were unusual playing conditions at snooker's Gibraltar Open, with some of the matches – being played behind closed doors –taking place without referees.