Using cork to stopper a bottle of wine is BETTER for the environment than screwcaps as the natural material is ‘carbon negative’, study finds

It might be assumed that harvesting cork to cap wine bottles would harm trees and the environment.

And consumers have been happy to switch to screwcaps in the belief they are both green and convenient.

However, a new study suggests that using cork is actually a better option for the planet and important wildlife. 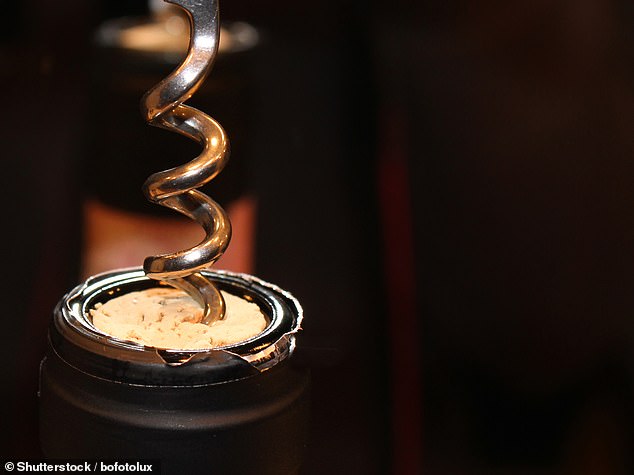 Research by Ernst & Young found that corks are carbon negative, meaning their production – from tree to bottle – actually captures carbon rather than generating emissions.  By contrast, screwcaps use resources and production processes that create carbon (stock)

Scientists are working on ways to eradicate the dreaded corked wine

A worst nightmare for wine aficionados is popping open a favoured vintage to be greeted by a whiff of wet dog from spoiled wine.

But the dismay of opening a bottle of so-called ‘corked wine’ could soon be eradicated, according to the world’s largest cork maker.

Corked wine occurs when a type of fungus in the cork reacts with traces of cleaning products used in wineries.

This mixture creates a troublesome chemical compound, called TCA, which ravages the alcohol, saps its flavour and produces the pungent odour of a sodden mutt.

But the family-owned cork-making behemoth Amorim in Portugal says it has now developed a secret procedure to expel all TCA, thus saving the wine.

Corked wine is the phrase commonly used to describe the undesirable event when a bottle of wine, sealed with a traditional cork, is spoiled upon opening.

This happens due to a chemical called 2,4,6-trichloroanisole (TCA) being created inside the bottle.

It is formed when naturally occurring fungi in the cork react with cleaning materials used to sterilise wineries.

Research by Ernst & Young found that corks are carbon negative, meaning their production – from tree to bottle – actually captures carbon rather than generating emissions.

By contrast, screwcaps use resources and production processes that create carbon to be released into the atmosphere. And, unlike cork, screwcaps, which use plastic, are not biodegradable.

Cork is harvested from the bark of cork oak trees, which regrows over time. Significantly, the trees are never felled and can live more than 200 years.

As these trees grow they capture carbon from the atmosphere. Importantly, the cork oak forests found in Portugal also provide a habitat for thousands of important animal, bird and insect species.

Researchers found a natural cork captures 309g of CO2 when used in still wine and the larger ones in sparkling wine capture 562g of CO2.

The average wine bottle has a carbon footprint in terms of production of 1200g. Consequently, the use of a cork stoppers can reduce this by a quarter in a still wine, and nearly half in a sparkling wine.

Carlos de Jesus, of the cork supplier Amorim, said: ‘If we want to preserve cork oak trees, which are never felled and can live more than 200 years, we need to use more cork stoppers.

‘Now we know, through an independent ‘cradle to gate’ analysis, that these cork stoppers have such a negative carbon footprint they can offset the carbon emission of other elements of the production chain such as bottles.

‘In fact, they are the go-to answer for everyone’s environmental responsibility.’

There has been a shift away from corks because of wine taint, which is when a bacteria – Trichloroanisole – creates a smell similar to damp cardboard and it becomes ‘corked’.

Wine experts say it is possible to deal with the odour and still drink the contents. For example, tipping the wine roughly between jugs several times will remove the smell.