Home » Lifestyle » Confused about what you should be eating? You don’t need to be

How to eat well may not be easy, but it is fundamentally simple.

That's the argument of Dr David Katz and Mark Bittman, who write in their new book, How to Eat: All Your Food and Diet Questions Answered, that while there are many ways to eat badly, there is one basis of good nutrition: stick to real food. 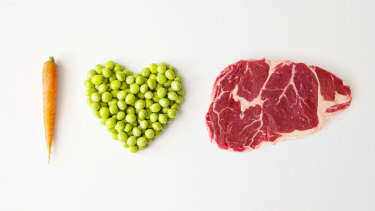 Carbohydrates, lectins and meat; Bittman and Katz attempt to clear up nutrition confusion in their new book. Credit:Getty

“Frankly, science tells a very clear story and aligns perfectly with sense; as long as you mostly eat whole, minimally processed vegetables, fruit, whole grains, beans, lentils, nuts and seeds and mostly drink plain water when you’re thirsty – if you mostly do that you simply can’t go too far wrong,” says Katz, the founding director of Yale University's Yale-Griffin Prevention Research Centre. “Sense says that, history says that, and all the science says that too.”

So how have we been led so far astray?

It’s a combination of factors, say the pair, including the development of the food industry over the last century, which has taken advantage of our evolutionary desire for sweet, salty and fatty foods with their constant assault on our senses using hyper-palatable “non-foods”; the proliferation of people peddling various diets; and profiting off nutrition “pseudo-confusion” and our desire for “a silver bullet” as Bittman, an acclaimed food writer and advisor on food policy at Columbia University, puts it.

Katz suspects that the authors of many nutrition books peddle “misinformation on purpose because it’s highly profitable” and then we all eat it up, wanting it to be true.

“In most parts of the world where people obtain the greatest health and sustainability benefits of diet, there is no diet news. They eat the way generations have been eating,” Katz says over the phone from New York.

“The thing, I think, nutrition books get wrong – and I think they get it wrong on purpose because it’s highly profitable – is the idea that we should be waiting for some great big epiphany about diet that, if only the right study is done, everything we knew until yesterday would be proved wrong and there would be some new answer sprinkled in pixie dust…

Their intention in writing the book, say the pair, is to have a “grown-up” conversation about nutrition and what both science and commonsense say.

“Science doesn’t work like a ping-pong match – it’s not ‘that’s right, now this is right’,” Katz says. “The way it works is you slowly accumulate an understanding of what’s true and every new study that comes along needs to be put in the context of ‘well exactly what question did they ask, exactly how did they go about trying to answer it and how does it fit with everything we thought we knew up until this morning?’”

While they don’t profess to know everything about nutrition, the body of science does provide a decent picture of the various fads and fashions of food that we become fascinated by.

Intermittent fasting, for instance, may seem as though “it’s endowed with some sort of metabolic magic”, they say, but all the trials show it has “almost exactly” the same effects as if we simply controlled our energy intake by moderating portion sizes each day.

As for arguments for and against certain foods like dairy, they say it depends on the person’s overall diet, what the food is replacing and broader arguments around the impact on the environment.

Diets like keto, which promote greater meat intake, are just “silly”, Katz argues, saying “it’s absolutely critical we cut back” for both environmental and human health reasons . Besides, he adds: “We don't know that it's safe, we don’t know people can stay on it and we don’t know if it's good for health over the long-term … Almost everything important, we don’t know.”

As for worrying about what our macronutrient breakdown should be, they say, don’t bother, because we can have a “really good or a really bad diet” that’s high or low in carbohydrates, high or low in fat and high or low in protein.

“If you focus on foods and foods in balance, there’s no way to get it wrong,” Katz says. “If you pick a nutrient to focus on… there seem to be innumerable ways to get it wrong.”

So where does that leave us? Ideally, deciding to ditch the pseudo-science and the seemingly contradictory findings of nutrition science headlines and returning simply to the basics of real food, in whatever combination we personally enjoy.

“It’s still not going to be easy because so much of our culture tries to talk you into doing the wrong thing; it tries to get you to buy a sequence of diet books, tries to peddle you an ever-changing variety of junk food. We used to get it right because the only food back in the day was real food and now we’ve invented all kinds of “frankenfood”,” Katz says.

“If you want to do it and you decide it’s important to you, you absolutely can do it. Real food is available to you. You absolutely can have a relationship with food where you love food and food loves you back and loves the planet back.

“As soon as we all decide we’d rather get it right for the lifetime rather than keep trying what’s new and shiny in every news cycle, we’ve taken a great big stride forward.”