One of the nation’s top military commanders told his troops that Beijing is already engaged in “grey zone” warfare against Australia and they must plan for the high likelihood this may spill over into actual conflict in the future.

The candid and confidential briefing by Major-General Adam Findlay to Australia’s special forces soldiers last year gives the most detailed insight yet made public into how the nation’s top military planners view the threat of China. 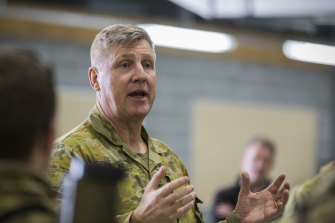 Major General Adam Findlay says Australia must prepare for the high likelihood tensions with China may spill over into actual conflict.Credit:ADF

The then-special forces commander, who has since stepped down but who still advises the Australian Defence Force, highlighted the steps Australia’s military was taking to prevent war but also described a “high likelihood” that actual conflict could break out due to the unpredictable nature of foreign affairs.

“Who do you reckon the main [regional] threat is?” General Findlay asked his troops and officers before answering: “China”.

“OK, so if China is a threat, how many special forces brigades in China? You should know there are 26,000 Chinese SOF [Special Operations Forces] personnel.”

Details of the April 2020 briefing have been obtained by The Age and The Sydney Morning Herald from multiple sources who have requested to remain anonymous because they are not authorised to speak publicly. They say General Findlay told his troops that, if the threat of conflict was realised, the ADF needed to rely not only on traditional air, land and sea capabilities but also on Australia’s ability to use cyber and space warfare.

He also highlighted the need for the ADF to reassert its presence and play “first grade” in south-east Asia and the south-west Pacific, describing how the military had uncovered information showing China was seeking to exploit “our [Australia’s] absence” in the region.

“We need to make sure we don’t lose momentum … get back in the region,” General Findlay said, highlighting Australia’s close ties to Indonesia.

In the past week the Australian government’s language on China has hardened. Defence Minister Peter Dutton has said a war over Taiwan could not be discounted, that Australia was “already under attack” in the cyber domain and that he wants to have a “more frank discussion with the public” about China’s intentions. Mr Dutton said the Australian government’s first priority was “continued peace in our region”, but warned the country needed to be able to defend its waters to the north and west as a priority.

However, former prime minister Kevin Rudd has said the escalating rhetoric “serves zero national security purpose” and risked inflaming tensions with Beijing. Former foreign minister Bob Carr wrote in The Age and Herald that “Australian diplomacy ought to be identifying the off-ramps that will avoid this nightmare” of war over Taiwan. 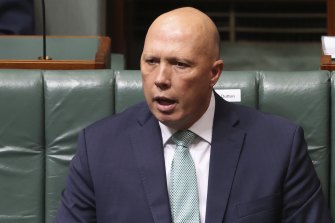 General Findlay’s briefing, however, was never intended for a public or political audience. Rather, he told dozens of highly trained special forces officers and soldiers that “China has game planned” to avoid crossing traditional military red lines and was instead waging a more subtle form of attack.

“They know that western democracies have peace, and then, when they cross a line, we get really angry. Then we start bombing people,” said General Findlay, according to the sources.

“China said, let’s be smarter. Let’s just play below the threshold, before it goes to war. Let’s achieve things strategically without having war. So, now we have a new dimension.”

China was on the one hand talking the language of “co-operation, where we all have happy families”. But, along with the “Russia and North Korea and Iran and all the other aligned states”, Beijing was competing with Australia in “the grey zone”.

China had focussed on “political warfare” enabling it to be “achieving strategic affects without going kinetic,” he said. Political warfare involves a country realising its interests by using a range of covert and overt means short of actual war, including trade levers, intelligence operations, foreign interference, diplomacy, and cyber operations. “Kinetic” warfare is a military term for when conflict involves lethal force.

China last year imposed more than $20 billion of tariffs on Australia as relations between the two countries worsened, while there was also a wave of cyber attacks on all levels of government and critical infrastructure such as hospitals and state utilities.

General Findlay said that to “stop war from breaking out” Australia’s military must compete against the “coercive constraints” imposed on Australia by China. In undertaking its own grey zone missions, Australia’s aim was to “put the adversary at a disadvantage, put us at an advantage” and avoid war.

General Findlay also said it was the first time since World War II that Australia was facing a “peer enemy” in China. He said Australia’s special forces must deal with this challenge while embracing the unprecedented reforms sparked by the military Inspector General’s recent findings that soldiers allegedly committed war crimes in Afghanistan.

General Findlay said that in embracing the arduous dual task of dealing with the threat posed by China while simultaneously undertaking major reforms, Australia’s military should also embrace the advice of British wartime leader Winston Churchill: “If you are going through hell, keep going.”

“We have got a cultural and professional transformation that is more significant than anything else that is going to occur in the ADF,” General Findlay said.

“At the same time, we have got to tool up for a new adversary. So this is the end point of the valley of hell that we are going into.”

The comments suggest the political establishment is now starting to issue some of the warnings in public that the military was being explicit about 12 months ago.

Mr Dutton and assistant defence minister Andrew Hastie have both recently made public statements about the need for the ADF to focus on its core military duties in the wake of the damning November 2020 Inspector General report into Afghanistan war crimes.