Rob Nixon is the creator of Nicko’s Kitchen, an online cookery show watched by millions on YouTube, Facebook, Instagram and TikTok which educates viewers in the art of home comfort food made from quality ingredients.

The cook from Perth, Western Australia, showed his audience how to create ‘smooth, creamy’ mash by peeling white potatoes and mixing the skins with milk in a saucepan over a high heat, allowing the flavour of the peels to infuse into the liquid.

While the skins soaked, he cut each potato in half and boiled for 15 minutes before gently pushing them through a potato ricer over a sieve to mash and remove all traces of fine lumps.

After seasoning the mashed potato with butter, salt and pepper, he strained milk from the skins and poured it over the top.

The video has been watched by 10,000 people since it was posted less than 24 hours ago on Saturday night, with many thanking Mr Nixon for sharing his creative tricks for improving universally loved dishes. 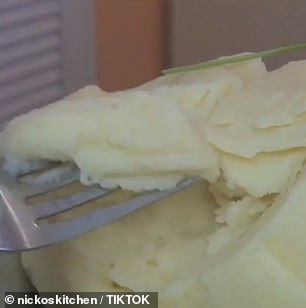 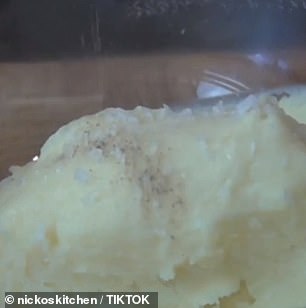 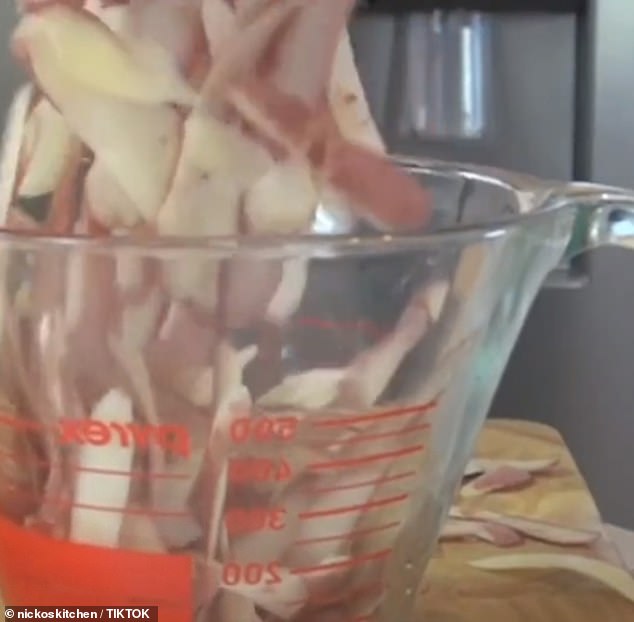 Before you begin, assemble your ingredients and equipment, making sure you have a sieve, potato ricer and two large saucepans.

For the smoothest result, Mr Nixon recommends using white, floury potatoes which are softer and easier to work with than red, blue or purple varieties.

Start by boiling a saucepan of water and peeling the potatoes, leaving skins in a bowl to the side.

Cut the peeled potatoes in half and cook them for 12 to 15 minutes, or until soft and tender.

Drain the potatoes and place them in a potato ricer, holding it over a sieve. Push them through the ricer, then the sieve for the silkiest finish.

You can use a handheld masher instead, but pressing them through a sieve removes even the tiniest lumps which hand mashers often miss.

Season the potato with plenty of salt, white pepper and soft butter, mixing until silky smooth.

Meanwhile, add a generous dash of milk and the leftover potato skins to a saucepan over a high heat, gently mixing to encourage the peels to flavour the milk. Strain the milk and mix through the seasoned, buttery potato.

‘Creamy, smooth and packed with flavour,’ Mr Nixon said in the video.

One viewer was in awe of how he created such perfect mash with such little time and effort.

‘So.. you’re telling me it doesn’t take like an hour and a half to make mash?’ she said, adding a string of laughing emojis to her comment.

‘I wish my mash was ready that quick, what am I doing wrong!’