It’s a cat-io! Owner creates a DIY play area for her house pets outside the kitchen using timber and wire netting – and it means she can open the windows without fear of an escape

A pet owner has revealed how her husband created a ‘cat-patio’ so that their house cats could enjoy fresh air without fear of them escaping.

Georgia Hook, from Dumfries, explained summer in her house was a ‘nightmare’ because the family could not open windows in case their four felines tried to make a quick exit.

She revealed her clever other half decided to build a ‘catio’ for their pets, costing only £75 in materials, and shared pictures of the pussy playground on the Extreme Couponing and Bargains UK Facebook group. 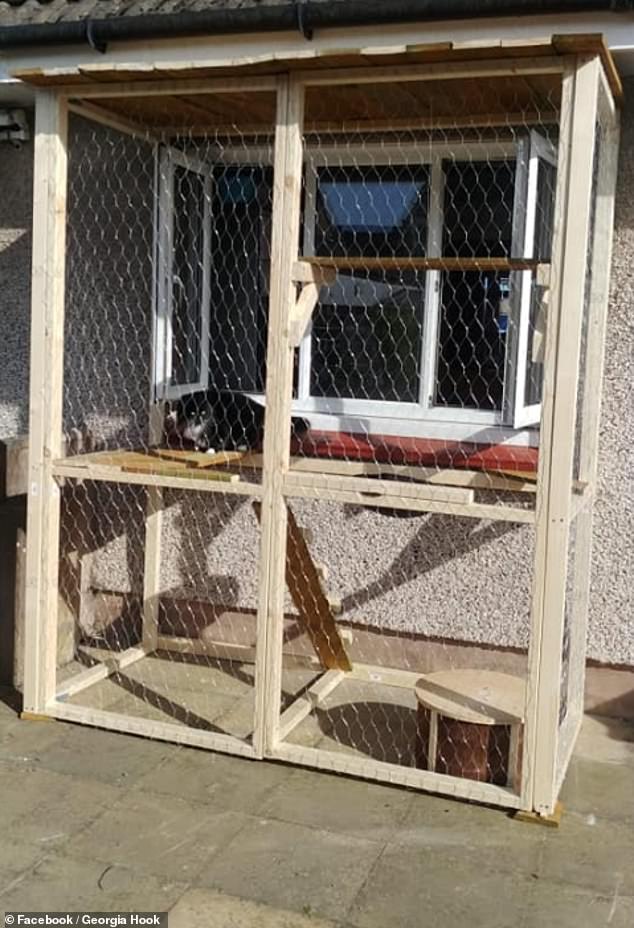 Georgia Hook, from Dumfries, explained summer in her house was a ‘nightmare’ because they could not open windows, for fear their four felines would leave the house. Her partner created a ‘catio’ for the pets, using materials only costing £75

Those who saw the snaps loved the idea and said it was the perfect way for the cats to remain safe while Georgia and her husband got some fresh air during the hottest months of the years.

Georgia explained she ordered the materials from Wickes and re-purposed some old wooden pallets the family had lying about to create the cat’s new dwelling.

‘Yesterday my partner built a ‘catio’ for them out of the kitchen windows and they love it,’ she wrote.

The adorable cat patio consisted of boxes to play in, a scratching post and even a hammock made out of an old bathroom towel.

She shared pictures of the cats enjoying the sun from the comfort of the safe enclosure, guarded with a chicken wire fence. 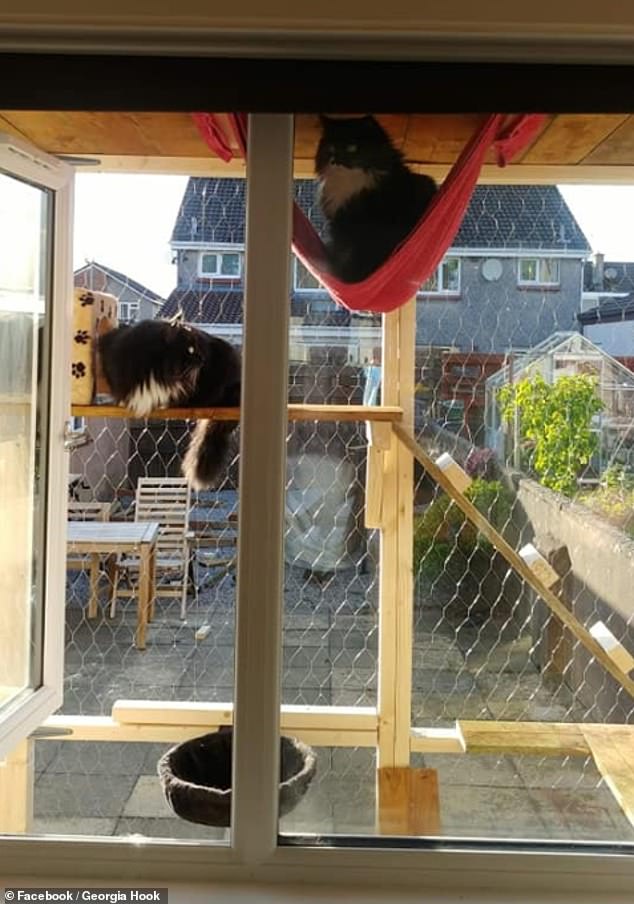 The cat-lover said she re-purposed old items, such as an old fence and old towels and boxes to furbished the ‘cat-patio’ 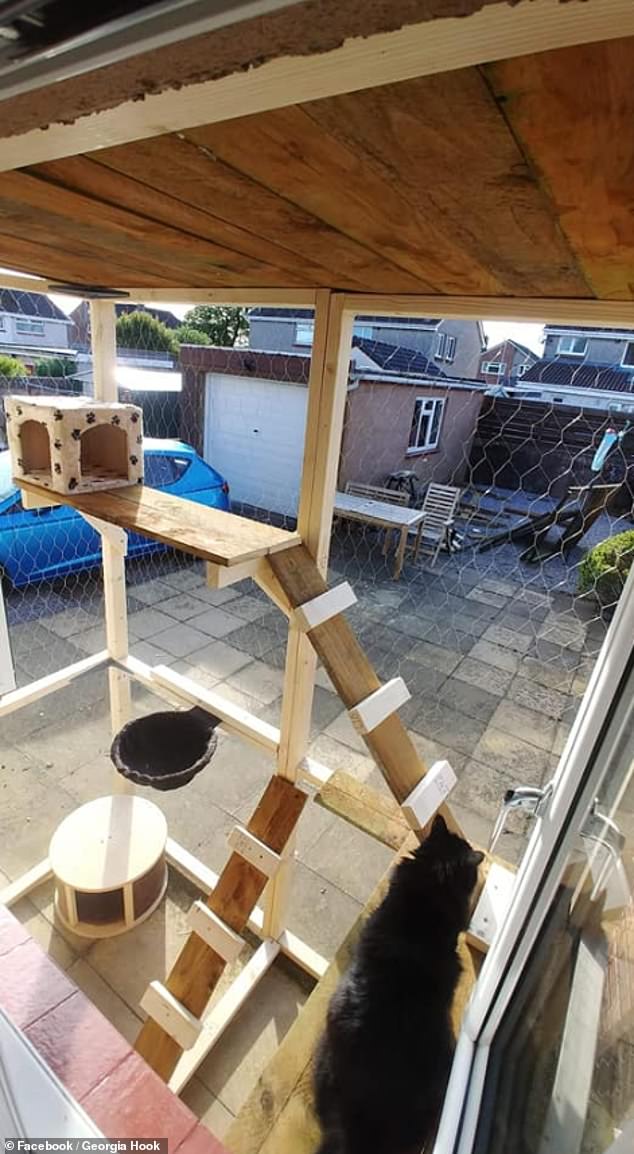 Georgia said the cats loved the creation, which is enclosed next to the couple’s kitchen window, so they can freshen up the house without risky the cats wandering too far 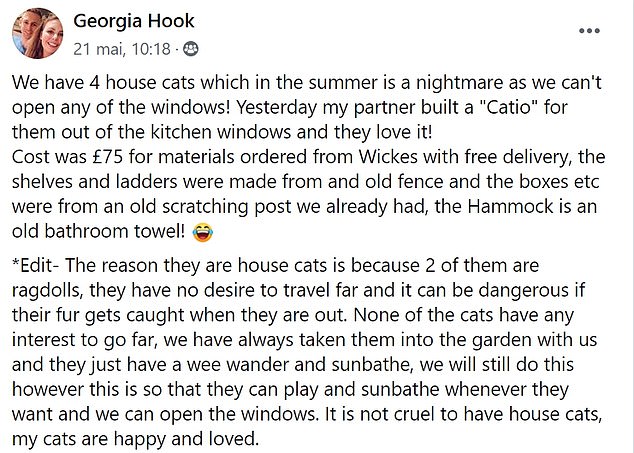 In a post on the Extreme Couponing and Bargains UK, Georgia said the patio gave her cats the opportunity to sunbathe safely 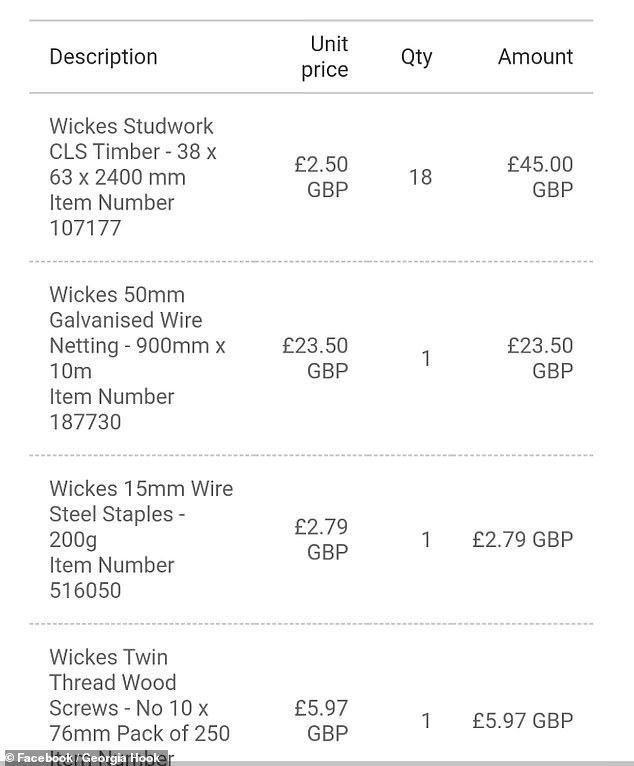 ‘Cost was £75 for materials ordered from Wickes with free delivery, the shelves and ladders were made from and old fence and the boxes etc were from an old scratching post we already had, the Hammock is an old bathroom towel,’ she added.

Georgia and her partner forked out on 18 studwork timber beams from Wickes priced at £2.50 a piece.

They also bought wire netting for £23.50 in order to keep the cats from running away.

After some voiced concerns that the cats might be unhappy staying at home, George edited her post to reflect that none of the four felines were very interested in going out. 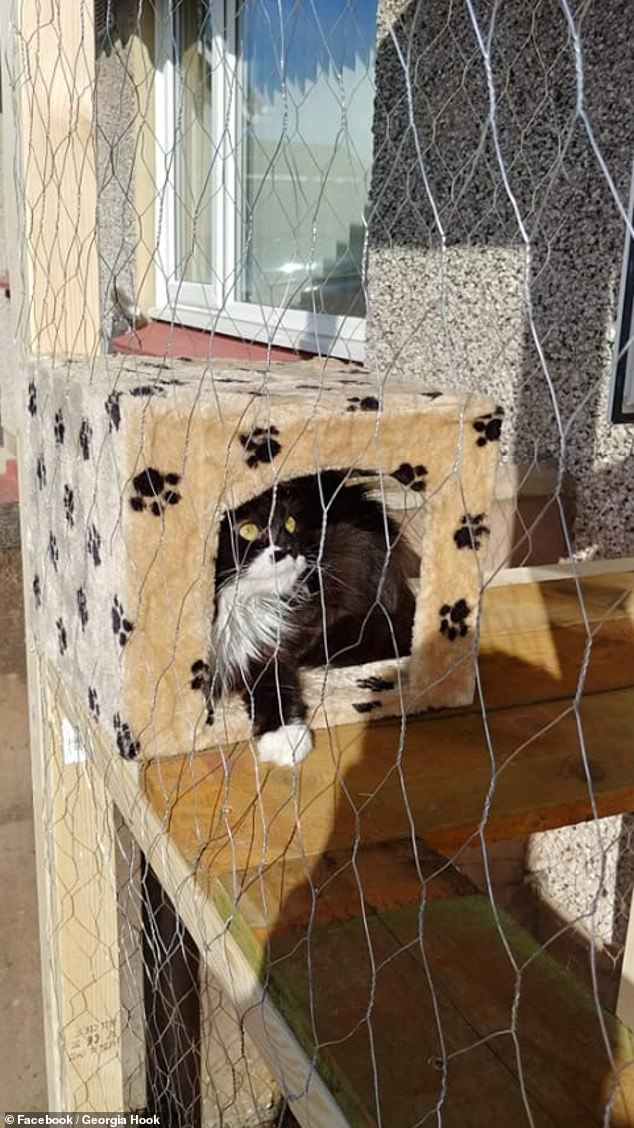 Pictured: One of the cats enjoying the sun from the safety of the wooden patio, which is surrounded by a thin wire fence to keep the felines from escaping

‘The reason they are house cats is because two of them are ragdolls, they have no desire to travel far and it can be dangerous if their fur gets caught when they are out,’ she said.

‘None of the cats have any interest to go far, we have always taken them into the garden with us and they just have a wee wander and sunbathe.’

‘We will still do this however, this is so that they can play and sunbathe whenever they want and we can open the windows. It is not cruel to have house cats, my cats are happy and loved,’ she concluded.

People loved the idea, saying they would try to emulate it for their own cats, who could not be let to roam outside

People loved the idea, and said it was a safe way to have their ageing cats going out without getting lost or taken.

‘We made one of these years ago. I put a cat flap in the bathroom window so I didn’t have to leave the window open,’ one said.

‘Amazing how indigenous,’ said another.

‘That’s what I want for my cat omg fab wish had someone to build us one as its to dangerous for my cat where I live,’ wrote one.

‘That’s fantastic idea I have a cat that’s desperate to go out but he’s 17 now and definitely has a bit of dementia so too risky to let him out,’ said one.