BRITS have been left stranded abroad by the UK flight ban on Portugal and all of South America, which were announced last night.

Enforced from today at 4am, all flights from Portugal and 15 South American countries have been stopped due to a new mutant strain of coronavirus reported in Brazil.

Despite the UK lockdown meaning Brits haven't been allowed to travel since January 4, many families have been stranded abroad who were due to return from a holiday before this.

One person said: "My flight home from Portugal on February 1 with BA has been cancelled for the fourth time.

Another person said: "Just found out UK has banned all flights from Portugal and our flight is cancelled anyway."

Someone else said: "So I’m stuck in Portugal how nice. I moved to a whole different country so I wouldn't be stuck here f*** you corona."

Portugal was slapped with the ban due to its "strong travel links with Brazil", Grant Shapps said yesterday, and they acted to "reduce the risk of importing infections". 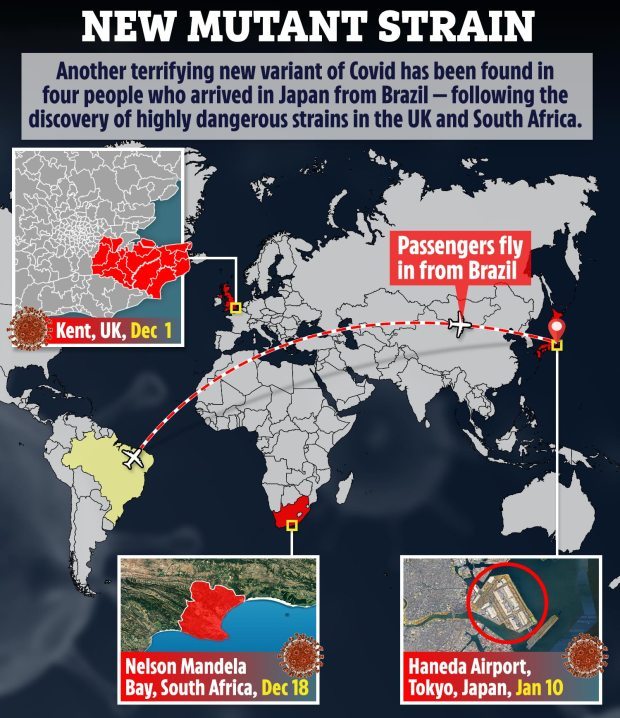 He added that Brits will be allowed to return, but have to isolate for ten days, along with all members of their household.

However, ABTA spokesperson Sean Tipson warned that families should get in touch with their airline as it is unlikely that their flight will be running in the future.

He told Sky News: "Airlines are not going to be running flights that are empty to bring people home.

"If your flight is in two or three weeks time, your airline might say you need to come back earlier.

"Don't assume your flight will be operating normally and check with your airline."

The majority of airlines and tour operators have already cancelled flights due to the UK lockdown.

Jet2 has cancelled all trips until March 25, as has easyJet, while TUI and Ryanair have cancelled flights until at least mid-February.

Travel experts hope that short-haul travel can return by May, due to the vaccine roll-out which plans to vaccinate all over-50s by the summer.

Approximately 3m people in the UK have already had the vaccine, which is prioritising over-80s, care home staff and residents and front-line health workers.

Here is everything you need to know about going on holiday this summer.