Australia’s cattle companies and MPs have pushed back at claims from British farmers that they had lower environmental standards and quality control, as a dispute over tariff-free beef threatens to derail a free trade deal with the UK.

Leader of the Scottish National Party in Britain’s parliament Ian Blackford asked UK Prime Minister Boris Johnson to rule out a trade deal that would grant “tariff-free access to Australian lamb and beef”. 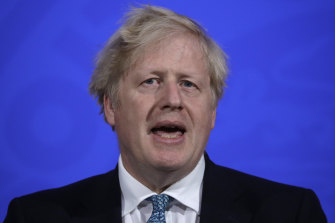 Britain’s Prime Minister Boris Johnson has signaled his support for a free trade deal with Australia amid controversy within his party. Credit:AP

Mr Johnson responded by asking Mr Blackford “why is he so frightened of free trade?” and signalled he would back a deal that lowered the tariffs, which currently apply to Australia’s agricultural imports.

The long-mooted free trading pact is largely complete and due to be signed when Prime Minister Scott Morrison visits the UK in June for the G7 summit, but has been hit by a major dispute at the highest levels of the British government.

“I will back Britain’s farmers and Welsh farmers in exporting their fantastic lamb around the world,” Mr Johnson said to another question on the floor of parliament.

Mr Johnson’s cabinet is split between those who think a true free trade deal should sweep away all tariffs and quotas, and others who fear an influx of Australian meat will harm British farmers and want caps on how much fresh food can be imported into the UK.

National Farmer Union of England and Wales president Minette Batters said this week that higher animal welfare and environmental standards put British farmers at a disadvantage compared to Australian producers, whom she implied enjoy a less rigorous and costly regulation.

“The British government faces a choice. It must recognise that opening up zero-tariff trade on all imports of products such as beef and lamb means British farming, working to its current high standards, will struggle to compete,” Ms Batters said.

“We have a robust regulatory framework for the use of agriculture and veterinary chemicals and strong compliance among producers,” Mr Tehan said.

“We want to eliminate tariffs so that UK products enter Australia duty free, and so that UK consumers have the option to choose high quality Australian goods over other imports.”

“Australia’s production systems are different to the UK and to compare animal welfare standards is like comparing apples to oranges and is not a basis for protectionism considering the subsidies UK farmers enjoy,” Mr Littleproud said.

Mr Brandis said any failure to strike a deal because of a dispute over agricultural exports would undermine the Conservative Party’s post-Brexit ‘Global Britain’ message.

He also hinted it could damage Britain’s chances of eventually joining the Trans-Pacific Partnership.

Mr Brandis said there was “no possibility” of the UK market being saturated with Australian beef and lamb because most exporters target the Asian market.

“It’s highly unlikely that Australian beef or lamb will swamp the UK market given our existing markets in Asia,” Mr Mahar said.

Australian Cattle Council chief executive Travis Tobin said that the livestock industry is “leading Australia’s climate response through its commitment to have net-zero carbon emissions by 2030”.

The UK is Australia’s eighth-largest trading partner, with two-way trade valued at $26.9 billion in 2018. Britain is also the second-largest source of total foreign investment in Australia.

The impacts of the deal will be relatively small: British government documents show it could lift UK GDP by 0.02 per cent, or £500 million ($911 million).