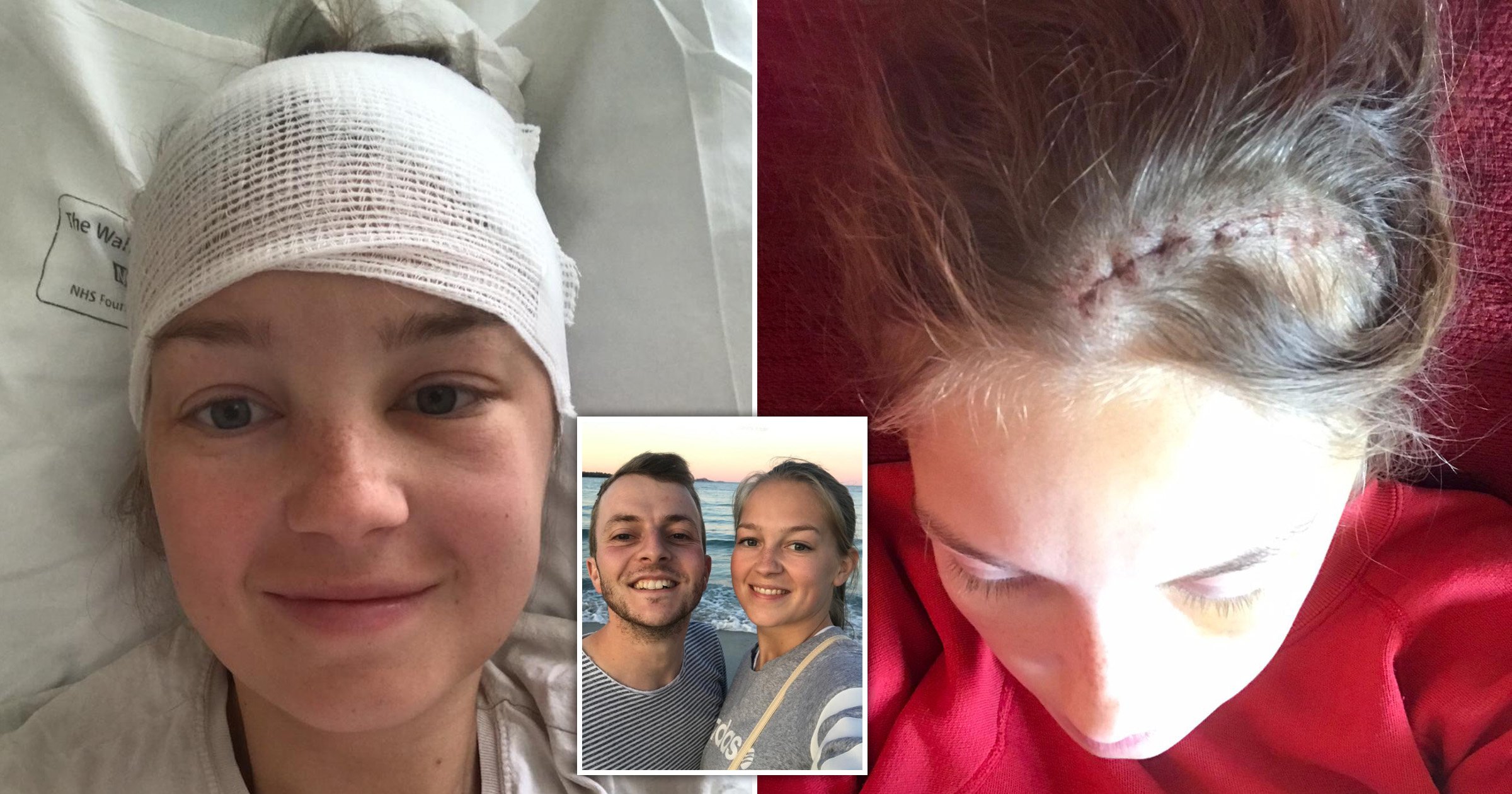 When Emma Bond noticed some music playing while visiting a hospital as part of her job, she thought it was odd they would be playing tunes there.

She had no idea the sounds she was hearing were in her head, and actually a sign of a brain tumour.

The 29-year-old, from Newton-le-Willows, Merseyside, was planning her wedding to fiancé Edd Blake and when she went to the doctor to talk about what she was experiencing, it was put down to stress.

When she eventually had more tests, doctors found the tumour and she had to undergo surgery two days before she was due to get married.

Emma, who works for a health care company which makes respiratory products, first noticed the symptoms in June 2019.

She said: ‘I had just done some training on a device for one ward and I went to introduce myself to another ward and as I went to the desk I started hearing music in my head.

‘I think it was the geriatric ward and I was thinking “why are they playing this music on the ward?”.

‘I was really confused and I had to walk outside. I was thinking “what was that?”‘

Asked to describe what the music was like, Emma said: ‘This is going to sound weird but when it was happening, I knew the song, I could hear it and felt I had heard it before.

‘But I cannot even speak what it was saying – it was very strange.

‘The only thing I really remember was why would they be playing this kind of music on a geriatric ward – I must have been thinking it was like Kanye West or something like that.

‘It would be in my head for about 30 seconds and then it would go.’

Emma started to hear the music again over the next few days so went to A&E but was told she was suffering from stress and the doctor advised her to take some time off work.

Emma said: ‘The first few times it happened were the worst, it was quite scary. I was thinking I’m not stressed, there’s something going on.

‘I could hear music but when people were responding to me I also thought they were also singing the lyrics to the song.’

She continued to hear music several times a day and so her GP booked her in for a scan at Whiston Hospital.

The scans led to a referral to The Walton Centre where they discovered Emma had a grade two brain tumour.

The surgery, two days before her planned wedding date, was a success as surgeons were able to remove 95% of the tumour, and the operation was followed up with radiotherapy and chemotherapy.

Once the tumour was gone, the music in her head stopped.

Despite her experience, Emma wasn’t put off listening to music – something that was helped by her friends and family choosing her Spotify playlist while she was undergoing radiotherapy.

Emma said: ‘The very last songs on the list chosen by my dad was Chumbawamba’s I Get Knocked Down But I Get Up Again [Tubthumping] and You’ll Never Walk Alone.’

The couple decided to dedicate 2020 to raising money for The Walton Centre and Clatterbridge Hospital in Bebington, where she was treated.

Edd said: ‘I was so grateful for all the support both The Walton Centre and Clatterbridge were giving Emma, I just had to do something.

‘So we came up with the crazy idea of me running a mile a day for a year and fundraise as we go.

‘I’ve been overwhelmed with the support we’ve had from friends, family, colleagues and beyond, it’s been amazing.’

Edd completed his challenge on December 31, totalling 366 miles. So far they have raised more than £8,500 and they’re aiming for £10,000 before they close the appeal in March.

You can donate to the fund here.

Get in touch at [email protected]