Parents of eight-month-old boy with spinal muscular atrophy race to raise £1.8MILLION for ‘world’s most expensive drug’ after he missed out on newly-approved NHS treatment because he was ‘one month too old’

A couple are fundraising to pay for the ‘world’s most expensive drug’ for their eight-month-old son after he missed out on NHS-funded treatment because he was a month ‘too old’.

Mostafa and Tara Aballai, from London, need £1.8million to pay for a one-off therapy for their son Zakariya, who has spinal muscular atrophy (SMA), a rare degenerative genetic condition causing paralysis, muscle wastage and respiratory failure.

More than half of babies suffering from SMA do not make it past their second birthday and until two years ago there were no proven treatments.

Now the NHS is offering a pioneering gene therapy known as Zolgensma, which has been shown to prevent paralysis. The US-made drug is thought to be the most expensive medicine in the world, at a whopping £1.79million per dose. 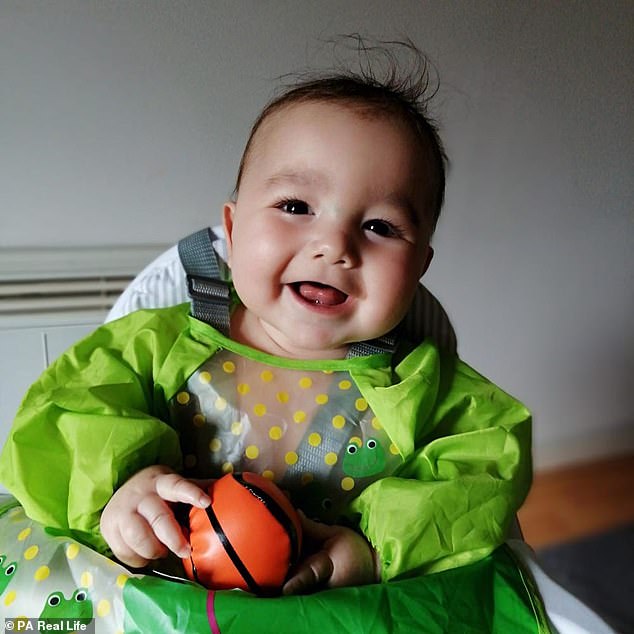 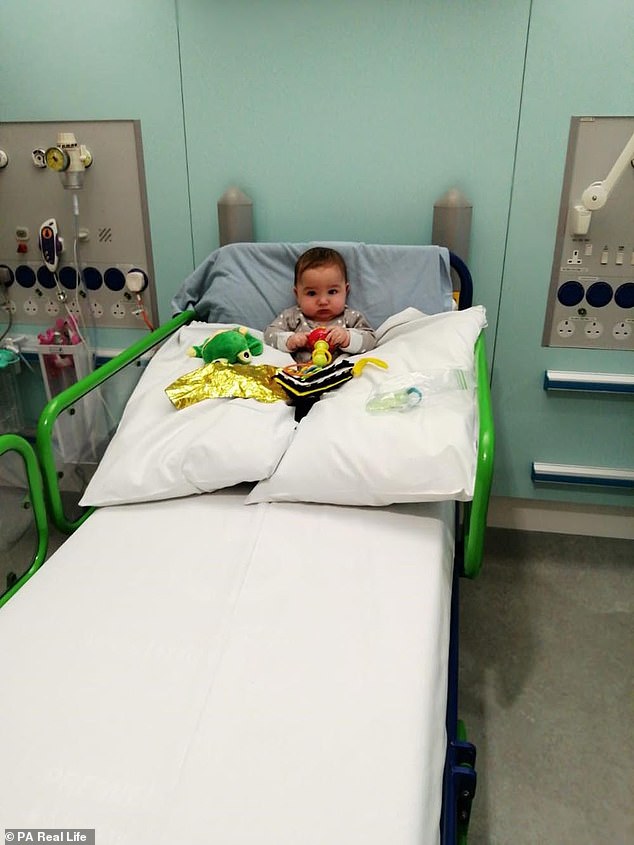 More than half of babies suffering from SMA do not make it past their second birthday and until two years ago there were no proven treatments. Pictured, Zakariya in hospital

Just weeks ago five-month-old Arthur Morgan became the first child to receive the drug on the NHS.

It is administered via an IV drip and instructs the body to make a protein which people with SMA are deficient in.

Zakariya missed out on the same opportunity because he had surpassed the age threshold.

NICE recommends Zolgensma as an option for treatment of babies with SMA up until the age of six months. If a baby is aged between seven and 12 months, the treatment must first be agreed by the national multidisciplinary team.

Zakariya was seven months and one week old when he was diagnosed.

Mostafa, 35, and Tara are now fundraising to pay for private Zolgensma treatment in the US, where it is available for children up to the age of two.

Zakariya is already losing movement in his limbs and his parents fear his condition will deteriorate past the point of treatment if they wait for the multidisciplinary team review. There is also the chance the team will recommend against the treatment.

Mostafa said: ‘It’s so frustrating, as the doctors are on our side. They all say if they could give the treatment tomorrow, they would.

‘But we have to wait for the clinical team to be assembled and to review Zakariya’s case and we’re terrified that his time is running out. 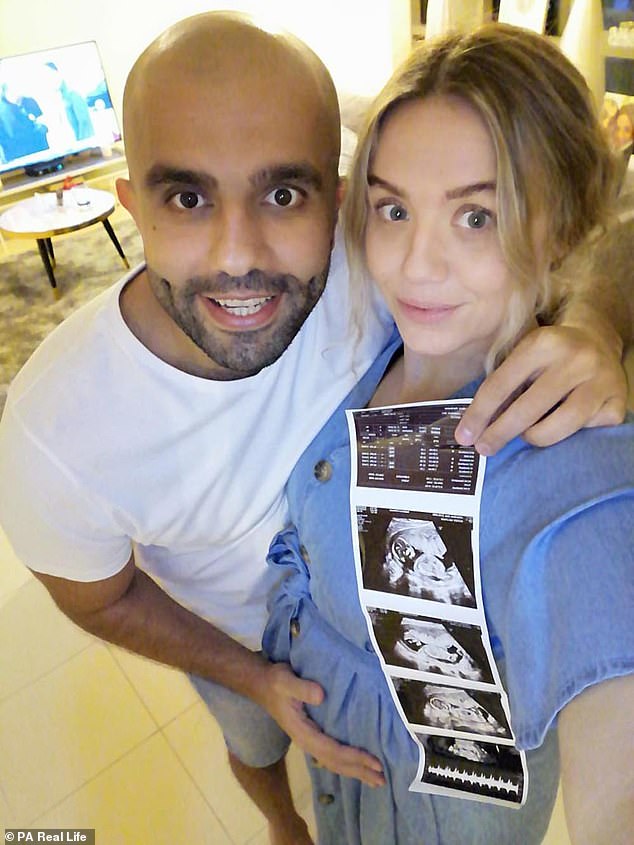 Mostafa, 35, and Tara are now fundraising to pay for private Zolgensma treatment in the US, where it is available for children up to the age of two. Pictured, with a sonogram

‘We don’t know how long it could take for the committee to consider our son’s case and, in the meantime, every day he loses more movement.

‘Our only option, if the review board refuses our baby boy treatment, is to raise £1.9million to go abroad for this life saving drug.

WHAT TO KNOW ABOUT SPINAL MUSCULAR ATROPHY, THE NUMBER ONE GENETIC CAUSE OF DEATHS FOR INFANTS

Spinal Muscular Atrophy (SMA) is a disease that weakens a patient’s strength by affecting the motor nerve cells in the spinal cord.

Those affected never gain the ability to walk, eat or breathe.

SMA is the number one genetic cause of death for infants.

It is genetic and passed from parent to child.

There are four primary types of SMA—I, II, III and IV, which are based on age of onset and the physical milestones achieved.

‘While we’re still hopeful that Zakariya will be approved for it on the NHS, we have to prepare for if it doesn’t happen.

‘And if he does get approved for Zolgensma, then we’ll give the money to another family going through the same heartbreak.

‘There are families with children aged 13 or 15 months who are desperate to go to America for treatment.’

Mostafa, a commercial sales director, and Tara, who cares for Zakariya full-time, met in 2013 and tied the knot in 2018.

They spent five years trying to conceive before Tara fell pregnant. Zakariya was born on October 11, 2020.

‘We both felt like Zakariya was a miracle sent by God or the universe,’ Mostafa said. ‘We felt so lucky.’

But at four months old, the couple noticed developmental issues.

‘Tara noticed that Zakariya wasn’t moving his legs like other babies his age. We just knew something was wrong,’ said Mostafa.

‘We took him to the GP and she referred us to a paediatrician, but we quickly noticed Zakariya wasn’t moving his legs at all.’

Zakariya was diagnosed with Type 1 SMA, the most common form of the condition, on May 11, 2021.

Caused by a faulty gene, SMA leads to paralysis and eventually respiratory failure. Most children don’t live past the age of two.

‘When doctors told us Zakariya wouldn’t make it past two years old, we were heartbroken,’ Mostafa said. ‘He is our miracle child.’

But the family had a glimmer of hope. In March the NHS struck a deal with the company Novartis Gene Therapies to offer Zolgensma.

In studies, a single treatment with Zolgensma has helped babies with SMA to sit, crawl and walk and also prevented them from having to be put on a ventilator.

The long-term benefits of the drug are still unclear due to how recently it was approved. 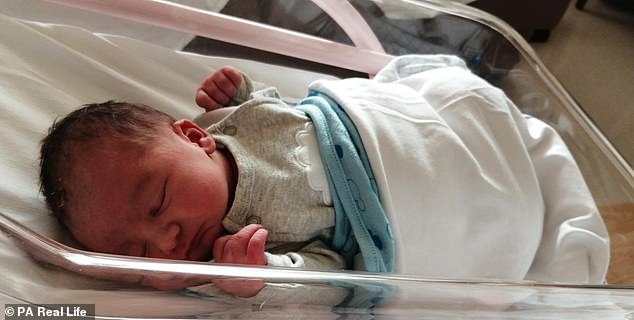 Zakariya in hospital as a newborn. He was diagnosed with SMA at seven months old

Zakariya is already losing movement in his limbs and his parents fear his condition will deteriorate past the point of treatment if they wait for the multidisciplinary team review. There is also the chance the team will recommend against the treatment. Pictured, as a newborn 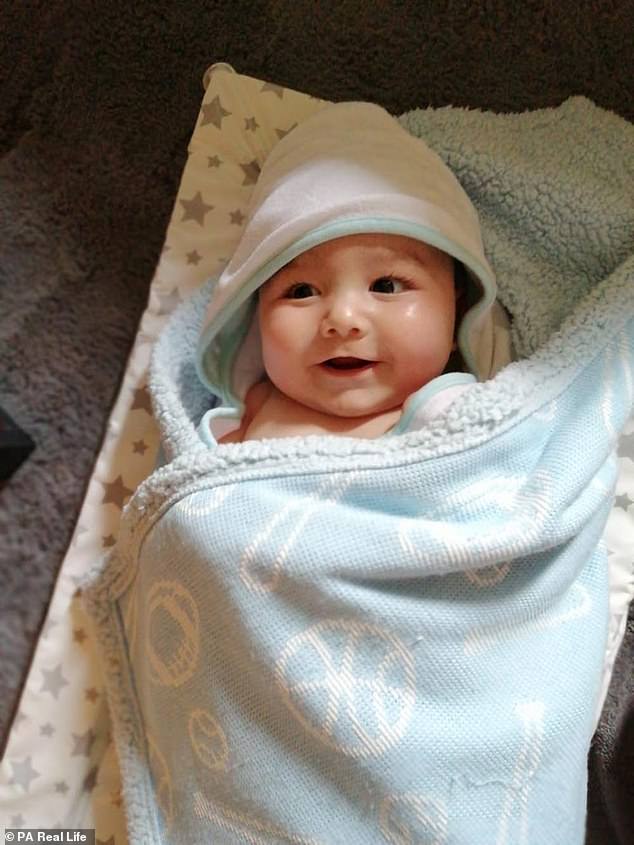 Zakariya as an infant. He has lost movement in his legs and the couple are paying £218 per week for private physiotherapy sessions to save the movement he has in his arms. They are still on a wait list for an NHS physiotherapist 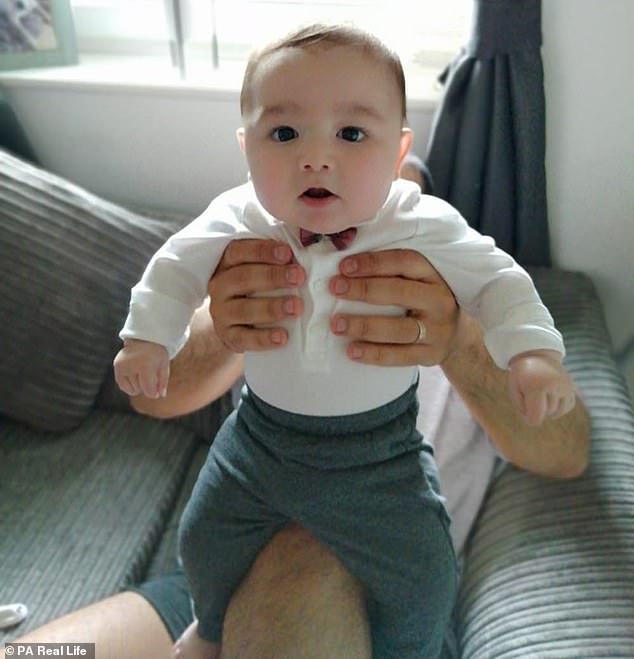 In spite of his condition, Zakariya, pictured, is a happy boy who loves to play, his parents said

Four specialist NHS centres have now been commissioned across the country to administer the treatment.

While Mostafa and Tara race to find a solution, Zakariya’s condition is deteriorating.

The infant has lost movement in his legs and the couple are paying £218 per week for private physiotherapy sessions to save the movement he has in his arms. They are still on a wait list for an NHS physiotherapist.

WHAT IS ZOLGENSMA, THE WORLD’S MOST EXPENSIVE DRUG?

The treatment Zolgensma works by replacing a faulty SMN1 gene that stops the body making the protein SMN, involved in muscle function.

The corrected gene is put into a virus (that’s had its DNA removed) which is then injected into the baby’s hand.

The gene starts making the SMN protein which prevents the loss of motor neurons — nerve cells that help co-ordinate movement in the spinal cord. These neurons send signals to the muscles.

In a study of 15 babies treated with Zolgensma published in the New England Journal of Medicine in 2017, all 15 were alive at 20 months of age, compared with 8 per cent among an untreated group from the past.

Twelve of the children received a higher dose, and at 20 months 11 could sit unaided and two walked independently.

Sixty children in the UK are born with SMA every year.

‘Our biggest fear is the paralysis reaching his respiratory system. If he’s on a ventilator he can’t have the treatment,’ Mostafa explained.

‘We massage his legs every day, and I pay for physio twice a week. He also has an injection of Nusinersen bi-weekly, which gives him a protein to retain muscle control.

‘It’s really traumatic for all of us, we have to curve his spine to administer the injection. It’s so painful for him.

‘But it’s not a long-term solution. We’ve been told it won’t be as effective once Zakariya turns one. We’re just racing against time hoping someone can help us.’

Despite the difficulties, Zakariya is a happy, smiling baby.

‘He’s the most amazing child. When we cry it’s like he knows there’s something wrong. He just gives us this look as if to say don’t worry it’s all going to be okay,’ said Mostafa.

‘Zakariya is our world and we will do whatever it takes to save our baby boy. If he doesn’t make it, we don’t want to live either. We waited so long for him, we have to fight.’

Tara added: ‘I truly believe with Zakariya he was a miracle, and his purpose is to raise awareness about this awful condition.

‘We love him so much. I know he’s going to change things. He’s already raising so much awareness about SMA.

‘The local community have been amazing. We’re so thankful for all the support that everyone has given us and to all the people that have donated to our GoFundMe appeal.

‘I genuinely think he was born to change the world; I think he’s changing the way things are done and making a difference. 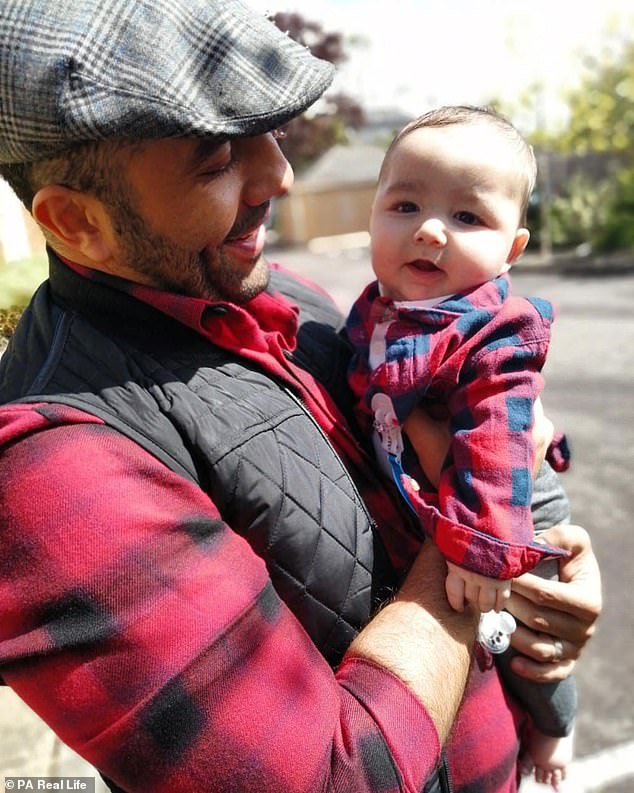 Mostafa, pictured with his son, said Tara soon realised Zakariya was not moving his legs like other children his age, which led to his diagnosis 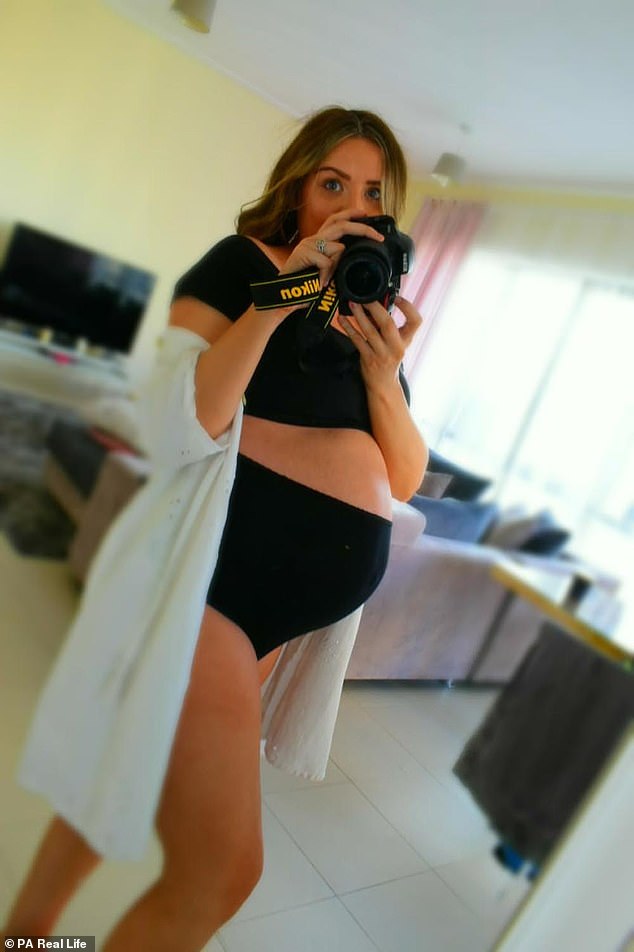 Tara during her pregnancy with Zakariya, said she couldn’t imagine a life without him and thanked her local community for their support 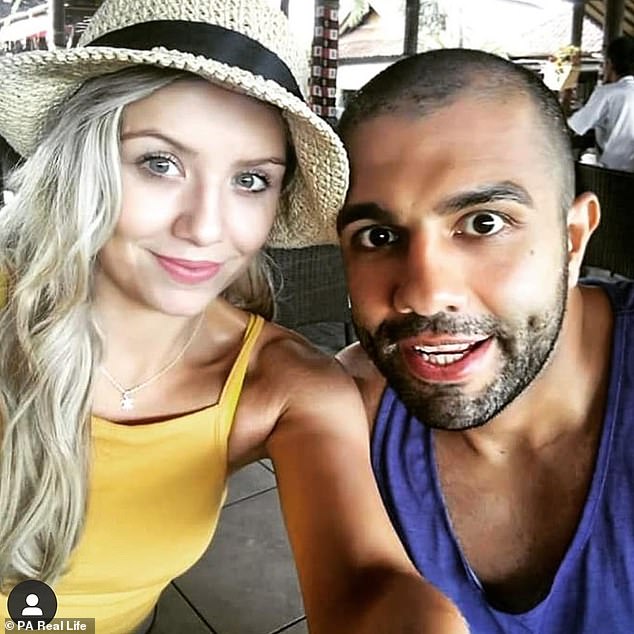 Mostafa, pictured with Tara, said the couple would fight for their son and do whatever it takes to save him

‘We can’t imagine a life without him in it, so we’re going to do everything we can to ensure he stays with us.’

A spokesperson for The National Institute for Health and Care Excellence (NICE) confirmed that limited trial data means there is a cut off point for providing Zolgensma on the NHS.

The spokesperson said: ‘Despite the high cost of the treatment it can be recommended for use on the NHS because of the evidence of exceptional benefit to young babies, potentially allowing them to reach normal childhood developmental milestones.

‘Because of the limited trial data for children aged 7 to 12 months, their treatment should be discussed by a national multidisciplinary clinical team.’

You can donate here if you’d like to help Tara, Mostafa and Zakariya. 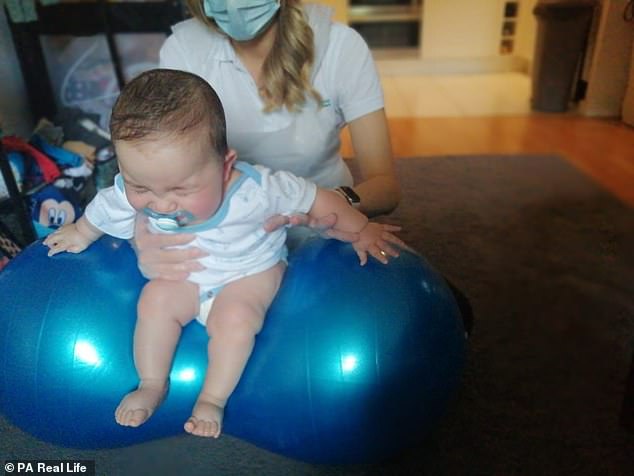 Mostafa said that with every day that goes by, Zakariya loses more movement. The couple are in a race against the clock to have him treated before it’s too late 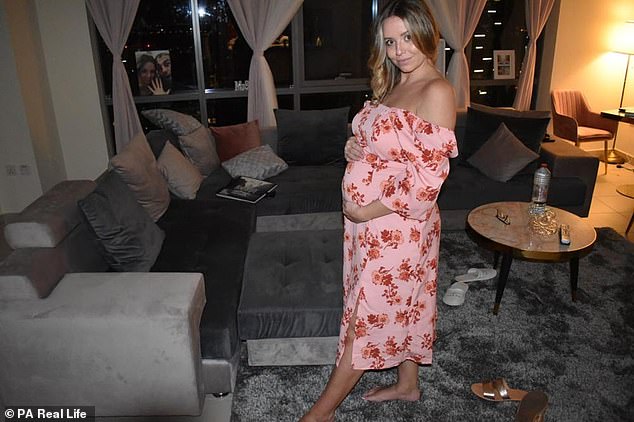 Tara, pictured during her pregnancy said she believed Zakariya’s purpose was to raise awareness about Spinal Muscular Atrophy type One