NEW YORK (AP) — Atlanta Braves star Marcell Ozuna was arrested Saturday on charges of aggravated assault by strangulation and battery after police officers said they witnessed him attacking his wife.

A statement from the Sandy Springs Police Department in Georgia said officers responded to a 911 call Saturday afternoon and entered a home where the front door was open and they heard screaming coming from inside.

The statement said officers witnessed Ozuna grab his wife by the neck and throw her against a wall.

“In addition to the strangulation attempts, the suspect also struck the victim with his arm which has a cast from a previous injury,” the statement said.

“The victim did have visible injuries, but was not transported to the hospital,” the police report said.

Ozuna has been booked into Fulton County Jail. An apparent photo of his arrest was posted by a user on Twitter. Sandy Springs is a suburb of Atlanta.

Major League Baseball’s Department of Investigations plans to review the matter under the joint domestic violence policy in place between MLB and the players association.

“We learned of Marcell Ozuna’s arrest earlier this evening and immediately informed the Commissioner’s Office,” the Braves said in a statement. “The Braves fully support Major League Baseball’s policy on domestic violence which stresses to the fullest that our society cannot and will not tolerate domestic violence in any form. Until the investigation is completed, we will have no further comment and all inquiries into the matter should be referred to the Office of the Commissioner.” 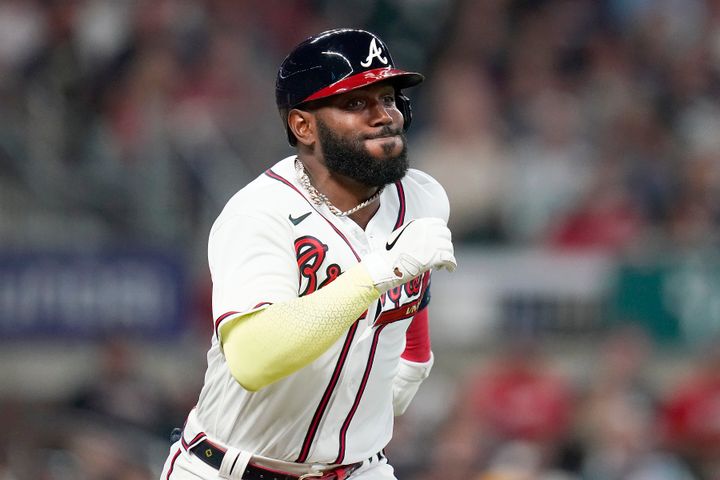 Ozuna was placed on the injured list Friday by the Braves with two dislocated fingers on his left hand. In the photo circulating of his apparent arrest, he’s wearing a bright yellow cast.

Atlanta is in New York for a series against the Mets this weekend. The Braves lost 13-2 on Saturday night, and manager Brian Snitker said he learned of the arrest after the game.

“The Braves have made a statement. I stand by that and that’s all I know,” Snitker said.

Ozuna re-signed with Atlanta in February on a $65 million, four-year deal after a stellar first season with the Braves in 2020.

He batted .338, led the National League with 18 homers and finished sixth in NL MVP balloting, becoming a fan favorite in the process with his colorful celebrations, including mimed selfies after home runs.

The Dominican outfielder hit it off with young teammates Ronald Acuña Jr. and Ozzie Albies. Ozuna also was a driver of the club’s pot-stirring hand gesture, used by players to celebrate big hits.

Ozuna is in his ninth major league season. He spent his first five with Miami, where he was an All-Star in 2016 and 2017, before playing two years for the St. Louis Cardinals. He is a .273 career hitter with 173 homers and 620 RBIs.

Ozuna’s wife, Genesis Ozuna, was arrested on a domestic violence charge in Miami a year ago Saturday.