Los Angeles-based, Dutch-born artist Lara Schnitger has long used materials associated with women's labour to celebrate the female body and frame questions around women's advancement. Quilts and tapestries have doubled as protest banners in women's marches she has staged as gallery performance pieces.

So when invited by the City of Sydney to develop an artwork, Schnitger had the idea to create a patchwork quilt of light to celebrate Australian milestones, figures, and slogans of female empowerment. 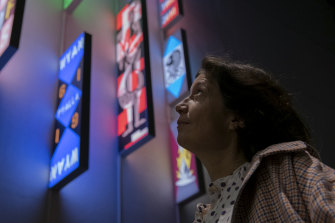 Patchwork of Light is made up of ten lightboxes installed at the Pitt St end of Reiby Place, to be officially launched Wednesday.

"They're big and they are clustered together on the one wall so they bring out so much light," the artist said.

"The whole artwork is reflected in the building next to it, so at night it looks like two art spaces. I wanted the lightboxes together as if it's some party like in Tokyo or Shibuya, and I wanted to make each sign equal, so not one sign steps out more than the other."

The artist worked with Aunty Bronwyn Penrith, a Wiradjuri and Yuin elder and member of council's Aboriginal and Torres Strait Islander Advisory Panel, to create a lightbox image of an Eora woman who fished in Warrane or Sydney Cove.

Another displays seminal dates around Australian politics and civic life. In 1884, Henrietta Dugdale formed the first women’s suffrage society in the Australian colonies. In 1902, white women were granted enfranchisement to vote in federal elections. In 1962, Aboriginal people were finally granted the same right to vote, and in 2010, Julia Gillard became Australia's first female prime minister.

Swimmers Fanny Durack and Mina Wylie, who had to crowdfund their 1912 Olympic campaign and returned home with gold and silver medals, are featured on a podium with crossed bodies and arms to suggest unity and defiance.

The artwork isn't without humour. There's a fish on a bike, referring to the popular feminist slogan of the '70s women's movement. Schnitger had always attributed the witticism to Gloria Steinem only to discover during her extensive research that it was the Australian educator Irina Dunn who had first coined the slogan.

The art project, her biggest international commission to date, was also a learning experience. Schnitger said she was surprised to learn how far ahead of America Australia had been in giving women the right to vote and was struck by the relatively unknown and inspirational life of Mary Reibey; the convict horse thief who became a trader and merchant and after whom the laneway was named.

"Public art plays an enormous role in a global city, revitalising forgotten spaces and bringing a smile to the faces of visitors, workers, and residents," Cr Moore said.

As an opening event, Schnitger will lead a women's march from the Sydney Opera House to Reiby Place.

A city without any public art was soulless, she said. "'Why would you go to a place, the same as any other place? For me, it's an important dialogue as people walk down the street on anÿ ordinary day. It gives so much soul to a place. I think a place without art is like a room without anything on the wall."