The ‘If I Ain’t Got You’ hitmaker and the ‘Peaches’ crooner will perform at ‘Celebration of Life’, which tickets are no longer available, at State Farm Arena in Atlanta on Friday, November 11.

AceShowbiz –Alicia Keys has reportedly been added to the lineup for Takeoff‘s public memorial service. The “If I Ain’t Got You” hitmaker will join Justin Bieber to take the stage at the funeral in Atlanta.

TMZ reported on Wednesday, November 9 that both Alicia and Justin will perform at “Celebration of Life” at State Farm Arena on Friday, November 11. Though it’s unclear what she will perform, a source with direct knowledge confirmed to the site that she will pay tribute to the fallen Migos rapper.

In the wake of Takeoff’s death, Alicia tweeted, “This is too much. It’s like every day.” The 41-year-old songstress added, “RIP Takeoff. Sending light to your family and loved ones. We are losing too many too soon!!”

Alicia has not collaborated with Migos but she and Migos were all featured on Kanye West‘s “Donda” album. In addition, Takeoff did reveal his desire to work with Alicia shortly before his death.

During the October 22 episode of “Drink Champs”, Takeoff and Quavo said they recorded a song called “Alicia Keys” for their joint album “Only Built for Infinity Links”. However, it didn’t make the cut because they were waiting for Alicia to feature on it. “We had to take it off because with no Alicia, no ‘Alicia Keys.’ We gotta get Alicia on there,” said Quavo, while Takeoff added, “But we still got that record in the vault.”

Takeoff’s funeral is shaping up to be a star-studded sendoff as Alicia is likely to join Justin to give a special performance. Free tickets were available to Georgia residents but have since sold out.

“UPDATE: Tickets for the Celebration of Life for Takeoff scheduled for Nov. 11th are NO longer available,” announced State Farm Arena on Twitter. “The event has reached capacity; fans who do not have tickets are strongly encouraged to not come downtown. No gifts or items will be permitted to be left at or near the venue.” 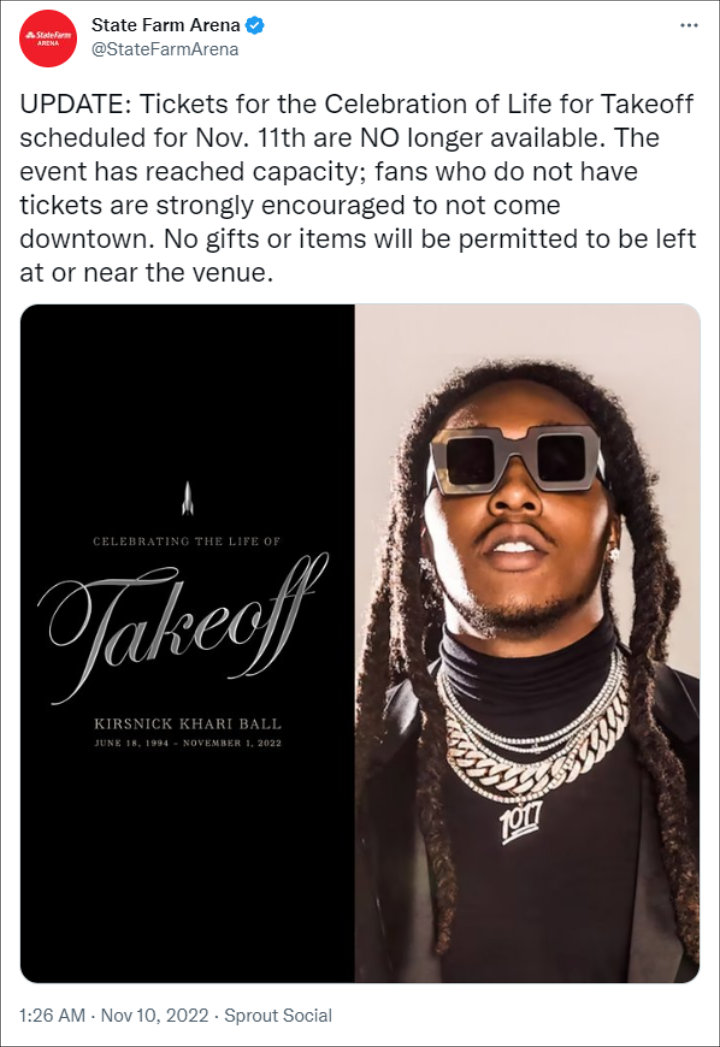 Doors open Friday at 11 A.M. and the service will start at noon. Free parking is provided by State Farm Arena at its Ruby Lot. No photos or video are allowed inside the venue and all devices will be checked upon entry.

Takeoff was shot and killed outside a bowling alley in Houston in the early morning hours of November 1. Quavo was also at the scene, although he was not injured. Two other people, including Quavo’s assistant Joshua Washington, sustained non-life-threatening injuries. Houston police are still investigating the shooting, and no arrests have been made yet. Takeoff was only 28 years old.