The aged care industry wants any COVID-19 vaccine to be made mandatory for their staff to protect older Australians in their care in a move endorsed by two federal Coalition MPs with medical backgrounds.

Nursing homes in Sydney and Melbourne were ravaged by the pandemic in earlier waves, prompting concerns in the sector that any further outbreaks could have a devastating effect. 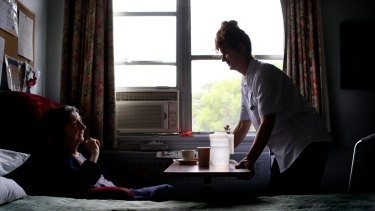 The aged care industry wants the government to force its staff to get a COVID-10 vaccine.Credit:Louise Kennerley

But business groups in other sectors and former deputy chief medical officer Nick Coatsworth lined up behind the government, backing its March timetable and plans not to make the vaccine mandatory across the community.

"As with the influenza vaccine during the last flu season, we believe COVID-19 vaccines should be mandatory for aged care workers, with tight exceptions," Mr Rooney said.

In the last year there have been 2049 cases of COVID-19 and 685 deaths in aged care facilities, according to federal Health Department figures.

"In addition consideration should be given to compulsory vaccination of workers at high risk of infection and transmission – not only for their own safety but for those they care for," Dr Allen said.

Queensland LNP backbencher Dr Andrew Laming, who is a medical specialist, said there should be "very strong requirements around workers who serve senior Australians being protected and that's likely to be a part of the employment requirements in those specific sectors".

Legal experts believe sectors like aged care may already have the power to require staff to get a vaccine, but a government mandate would avoid legal challenges based on claims of discrimination against staff who oppose vaccines without a health reason.

Aged and Community Services Australia, which represents not-for-profit care homes, referred the question of mandatory vaccines to the government.

The Health Services Union has not yet decided whether it supports the idea, however, its national secretary Lloyd Williams said he was disappointed the union had not been consulted and questioned whether mandating a vaccine was necessary. The sector's staff and residents are among those the government has said will be prioritised when a vaccine is available.

While business groups outside the sector are waiting on the vaccine to help restart normal economic life, none said they were unhappy with the speed of the government's planned rollout. The Franchise Council, Victorian Chamber of Commerce and Industry, and the Australian Retailers Association were all pleased with the timetable, which Health Minister Greg Hunt announced on Wednesday would likely begin near the start of March.

In contrast to calls for the vaccine to be mandated broadly, the Victorian Chamber of Commerce and Industry's chief executive Paul Guerra said: "I'm pretty sure we'll be oversubscribed for people that want it".

Former deputy chief medical officer Nick Coatsworth agreed: "I think we've got a really trusted immunisation program," he said. "If we can bring people along with that, then … we'll get enough people vaccinated that it's a successful program."

The Business Council of Australia, which represents the country's largest companies, cautioned the vaccine would take months to be delivered and took aim at "disproportionate and inconsistent" responses in the meantime.

Small Business Ombudsman Kate Carnell said smaller operators were eager for certainty on when the rollout would begin.

She said it was critical Australia had a conversation about what employers were supposed to do if one of their staff members did not want to take the vaccine, and other staff members were concerned about working alongside them.

"It's [a conversation] that desperately needs to be had – I don't think it will be a common problem, but you can imagine a scenario where it does happen."

Health Minister Greg Hunt's office did not provide comment by deadline but the government has previously ruled out making the vaccine compulsory across the board.

Australians had great confidence in vaccines, which was “very, very important” to maintain, Mr Hunt said on 2GB radio on Wednesday.