Contrary to the assumption of many parents, playing AFL or soccer is no safer than playing rugby.

An Australian Institute of Health and Welfare (AIHW) report released last week showed rugby, soccer and Australian rules football all have about the same number of serious injuries requiring hospitalisation each year. 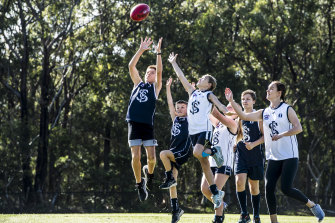 Head injuries including concussions accounted for nearly 12 per cent of the 4789 AFL players who were hospitalised in 2016-2017. This compared to 11 per cent of 4517 rugby players, but was twice the rate of head injuries among soccer players. AFL players were much less likely to suffer a soft tissue injury than touch football players.

The new president of the St Ives Junior AFL club Lindy Jones said she is very "cognisant" of the dangers of concussion: Her son Jamie took three months to recover from a hit to his head during an under 13s match last season.

"Having your child bump their head, there are concerns because you can't see the damage compared to a broken bone," she said.

A brain scan, released last week, of the late AFL legend Graham 'Polly' Farmer revealed he had neurodegenerative disease believed to be caused by repeated concussions or head injuries. Called Chronic Traumatic Encephalopathy (CTE),  it has also been found in rugby league, soccer and ice hockey players, as well as boxers.

Because repeated concussions cause the biggest threat of permanent brain injury, Barker School in Sydney's north gives all high school students an annual cognitive test to establish a baseline.

The "Cogstate test" is used for those students who claim to be "perfectly fine", said physiotherapist Robbie Wright, a former Swans player who runs Barker's concussion management program. It tests whether an injury has affected the cognition of those who attempt to play sport too soon after a more serious injury. This includes bumps to the head incurred from falling out of bed or tripping over in the school playground. 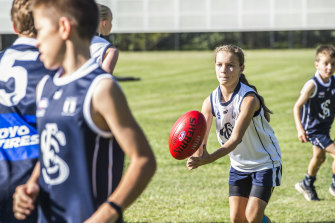 "The second hit is the highest risk," said Mr Wright. "We know that the brains of growing adults (children) are much more influenced by this, so we are really over-the-top careful with them," he said.

The 10-minute test uses playing cards to measure memory, processing speed, attention, and ability to learn – which are damaged by a brain injury – to confirm that the student has recovered to their baseline before the injury.

In a statement the AFL said that as knowledge and understanding of concussion had increased, it had strengthened match day protocols, changed the Laws of the Game to further discourage high contact, and improved the identification of potential concussive incidents through the use of video

Despite the publicity about the threat of head injuries, there has been a 10 per cent increase in the number of girls (18 and under) and boys (17 and under) signing up to play AFL across greater Sydney, an AFL spokesperson said. St Ives has also had record enrolments, particularly among girls, this year.

At St Ives, like other clubs, new rules prevent dangerous play, including sling tackles, and penalise bumps to the head. Clubs can't start a game without properly trained first aid officers. St Ives is increasing training for coaches on concussion and reviewing its first aid guidelines. Children aren't allowed to return to play before they make a full recovery.

Monash University neuropsychologist Dr Catherine Willmott has worked with the AFL on multiple sports concussion studies.  She said the next five to 10 years will be significant for research establishing a direct cause-effect relationship between concussion and later issues such as CTE.

“We will have more studies where we’ve followed players for 10, 20 years,” she said.

“If I wasn’t a neuropsychologist … you would be concerned and think ‘god, my kids are at risk’. But the finding of this (CTE) in Polly Farmer's brain doesn’t equate to every child who plays Aussie Rules being at risk."

“What we do have is documented research about the value of participating in sport in terms of health, fitness and social benefits," she said.

"We need to weigh all that up so that parents are presented with a sensible, weighted evidence in deciding for their children to play or not," she said.