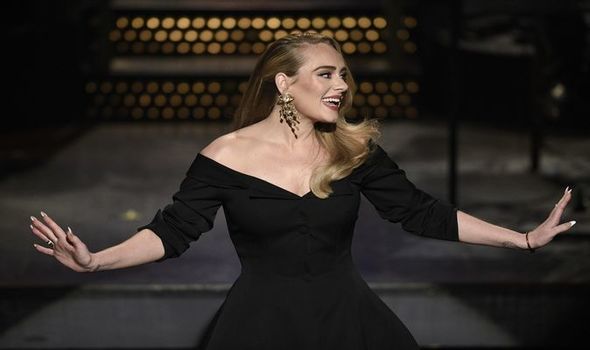 Just a week before her fourth birthday, Adele was hidden inside her mum Penny’s trench coat and smuggled into the Brixton Academy in South London to watch the Beautiful South in concert. The problem was it was standing-only and little Adele couldn’t see a thing. So Penny asked a well-muscled bodybuilder type if he wouldn’t mind putting her toddler on his broad shoulders. Adele now had the best view in the house and recalled happily: “It was amazing – my clearest memory of when I was little.”

But the evening got even better. Her new hero came to the rescue when a host of balloons were released into the audience and she couldn’t manage to grab one. “He walked through the crowd and knocked someone out who wouldn’t give me a balloon,” she said.

Her father, Marc Evans, had already settled back in South Wales so it was just her and her mum Penny, who had become pregnant at 18. She gave up college to raise the daughter she had named Adele Laurie Blue Adkins, but was determined that having a child was not going to stop her living her life.

They were a team and Penny never treated her daughter as an inconvenience but always as someone to be included in whatever was going on. Their flat in Tottenham, north London, was filled with music, and she even allowed Adele to stay up to watch Later with Jools Holland which was broadcast at 11.15pm every Friday.

She took Adele to her first pop festival when she was five, a one-day event in Finsbury Park headlined by Penny’s favourite band, The Cure. The post-punk band provided the soundtrack to Adele’s Tottenham years, although she was really scared of the lead singer Robert Smith because she thought he looked like Johnny Depp’s fictitious film character Edward Scissorhands.

By the time Penny loaded up her old Citroen CV and took them off to Glastonbury, Adele was an old hand at festivals. Then aged eight, the youngster sat happily in the mud to watch Radiohead and The Prodigy on the main Pyramid stage. The old Citroen also frequently made the journey down the M4 to the elegant seaside town of Penarth to visit Marc’s parents, John and Rose Evans.

If Penny ever needed a break then she always knew she could leave Adele there and her daughter would be loved and well cared for by the grandparents she adored. Grampy John, who was only in his mid forties when Adele was born in 1988, became a father figure in Adele’s life simply by giving her so much time and affection. Her dad Marc, who had split from Penny when Adele was just nine months old, recalled: “He was a very honest, straight up sort of guy. He really was a lovely man.”

John, who had built up his own plumbing business, was very fond of Penny and gave her a monthly allowance to help care for Adele. Some years, mother and daughter would spend Christmas in Wales. One Christmas Eve, when Adele was asleep and Nana and Grampy had gone to bed, Penny carefully cut up a newspaper in the shape of feet and placed them on the stairs. When her daughter awoke in the morning, she said: “Look, Adele, it’s Santa’s footprints. He’s been.”

Adele loved her mother’s large extended family in north London, but in Tottenham she was one of many, while in Penarth she was the centre of attention. The big treat each summer was joining her grandparents when they took to the “open road” in their caravan.They didn’t go far, just down the coast to the beautiful Gower peninsula or further on to Tenby, but Adele loved it. It was such an adventure. She was a kind and pretty little girl with fair hair and green eyes and she made friends easily in South Wales.

Her proud father observed: “She was more of a tomboy type than a girl with dolls. She was a lovely kid. She was one of those kids who, if she had a bag of sweets, would give them all away and keep just one for herself.”

She also despised bullies, particularly at school in north London. She went to the very diverse Coleraine Park Primary School round the corner. Marc recalled: “Tottenham is a rough place, but if another kid was being picked on, then she would be the one sticking up for them. She was also very protective of her friends.”

From a very early age, Adele was putting her feelings down on paper – a habit that would stand her in good stead as a songwriter – particularly if she had been told off by her mum for not tidying her room. Then she would shut herself away and push a note underneath the door to let Penny know that she wasn’t coming out for a year!

While her mother’s musical tastes were more edgy, Adele became a big fan of the Spice Girls and would dance around her bednce room singing Wannabe. She was determined that when she “grew up” she was going to be Ginger Spice.

She took to heart the group’s Girl Power mantra: “Approach life with attitude. Don’t let anyone tell you that you can never do something because you’re a girl. Have fun.” Adele and her mum left Tottenham when she was nine, first settling in Brighton, before returning to south London when Penny began a new relationship.

Leaving north London was one of the two big events that shaped her childhood. The other happened just before her 11th birthday in May 1999. Her Grampy, John Evans, had been diagnosed with bowel cancer and the prognosis was poor. Penny drove Adele up to see him during the last weeks as he slipped away at a cancer centre in Cardiff.

Adele later admitted she was overwhelmed: “I couldn’t face the fact that the love of my life, my granddad, was dying.” He passed away aged 57. Despite being griefstricken, Adele bravely went with Penny to the funeral.

Even though she coped well on the day, Adele struggled to get over it. After a few weeks her worried mother decided to seek professional help and took her to a counsellor experienced in dealing with bereavement in children. Adele, it became clear, was a far more sensitive girl than people realised.

She had wanted to sing and perform at secondary school but didn’t have the opportunity, although she surprised everyone by becoming highly proficient on the clarinet. She was still only 13 and doing her best impression of a bolshie teenager when a friend of her mum’s heard her singing at their flat above the Co-op in West Norwood one day and suggested she should take singing more seriously.

Penny encouraged her to apply to the BRIT School in Croydon, south London, and went along to support her at her audition. Adele sang Free, a StevieWonder ballad, and played Tumbledown Blues on the clarinet.

The deputy head of music, Liz Penney, was impressed, “I thought ‘That’s a larger voice than you would expect in a 13-year-old. She’s in!'” Adele soon established herself as one of the brightest of her year group. Liz recalled: “She was very quick witted.” Her favourite school day was Thursday when five solid hours were dedicated to music. She knew she had been given a huge opportunity and was determined not to mess up.

Liz noticed Adele’s commitment right from the start. She was forever passing the young teenager in the corridor, “Working by herself, writing lyrics, picking up the guitar and learning to accompany herself.”

Her famous singing style developed aged 15 when she found an album by the legendary Etta James in the bargain bin of the Oxford Street branch of HMV. Most evenings when she got home she would listen to the CD in the bedroom, practising Etta’s rasping raw power.

Despite taking school seriously, she was very sociable, smoking roll-ups with her friends on the benches behind the canteen, enjoying a bacon and egg sandwich at a local café for lunch and going to see bands playing locally. Often she would catch the train into school with Kate Nash, who would also become a well-known singer.

The two girls laughed at the same things. The famous Adele cackle was what another BRIT contemporary, pop star Jessie J, remembers about her: “You could hear her laugh from a mile down the corridor. “She was very kind of loud and everyone knew her, and she was the girl everyone loved.”

Adele was always far too busy to have a boyfriend at school. Her classmates couldn’t even remember her kissing a boy. One of her contemporaries recalled: “She always had one thing on her mind and that was succeeding.”

She did have a crush on one good-looking boy, however. She was at a party just before her 18th birthday when she plucked up the courage to tell him how she felt and was delighted when he seemed to feel the same way. Later that evening, she saw him kissing one of her best male friends.

“We’re not even going out and you’re cheating on me already,” she declared. Inspired by this disappointment, she wrote one of her most famous early songs, Daydreamer, which would feature on the demo that won her a record deal and also would become the first track on her debut album, 19. Success would soon be very real and not just a dream.