A decade-long campaign to reintroduce small native marsupials to the wilds of NSW has moved a step closer to its goal with the release of 10 greater bilbies to a special feral-free enclosure in the state's far north-west.

The bilbies have been presumed extinct in NSW for more than a century after foxes and cats wiped out the rabbit-sized marsupials. The first of 10 bilbies – five of each sex – have now been released into one of two 2000-hectare feral-free enclosures within the Sturt National Park. 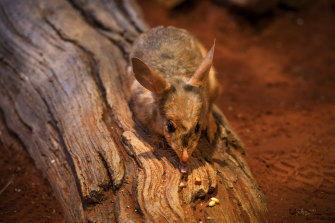 Greater bilbies are being reintroduced to the wild in NSW after being wiped out by feral competitors a century ago.. Photograph taken at the Taronga Zoo.Credit:Rhett Wyman

"Native species never had the chance to develop anti-predator behaviour because it happened so quick," Sarah Legge, a lecturer in behaviour ecology at the Australian National University, said.

In a form of what Professor Legge dubbed "accelerated natural selection", the bilbies will later be released to a much larger so-called Wildlife Training Zone within the national park, where the animals will be exposed to a limited number of cats. Those that learn how to be shy of cats and evade them will survive.

Richard Kingsford, leader of the Wild Deserts Project and director of UNSW's Centre for Ecosystem Science, said the researchers would wait until bilby numbers reached between 200 and 300 before starting to release them into the training zone.

The first batch of the marsupials were bred at the Taronga Zoo in Dubbo, where they were deliberately excluded from public exhibition. "We wanted the wildest of the wild," he said.

The build-up of bilbies should only take a couple of years as recent rains have created an abundance of food sources, from insects and their larvae to seeds, spiders, fungi and very small animals. 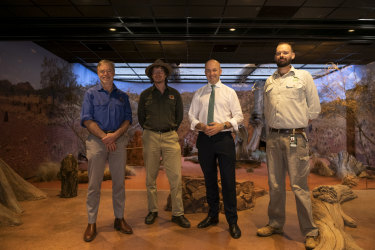 Environment Minister Matt Kean said the Wild Deserts Project was one of the country's most important threatened species plans and would swell the current national population of some 9000 bilbies by about 1500.

"Australia has the worst mammal extinction rate in the world but we are turning back the tide, reintroducing at least 13 mammal species currently listed as extinct in NSW by establishing a network of feral cat- and fox-free areas," Mr Kean said.

The project, which began in 2016, has already begun introducing mulgaras into the Sturt National Park, with quolls and bettongs to follow later. 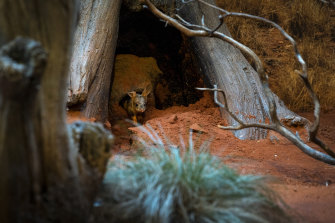 A greater bilby at the Taronga Zoo.Credit:Rhett Wyman

Backed by about $8 million in government funding alone, the venture required building special fencing over dunes in one of the most rainfall-variable places on the planet.

"It's wonderful to see these animals which lived here sustainably with our ancestors, being released back into the wild again," Cecil Ebsworth, a Wongkumara traditional owner, said.

Professor Kingsford said the combination of science with national park management – including the ongoing need to keep cats and other ferals under control – was providing lessons for conservation projects elsewhere.

"It's really an interesting model for governments to look at," he said.

Most Viewed in Environment