IT'S now cheaper to rent than buy in most places across the country because of surging house prices during the pandemic.

Monthly rent is as much as £250 less than the cost of monthly mortgage repayments, new research reveals. 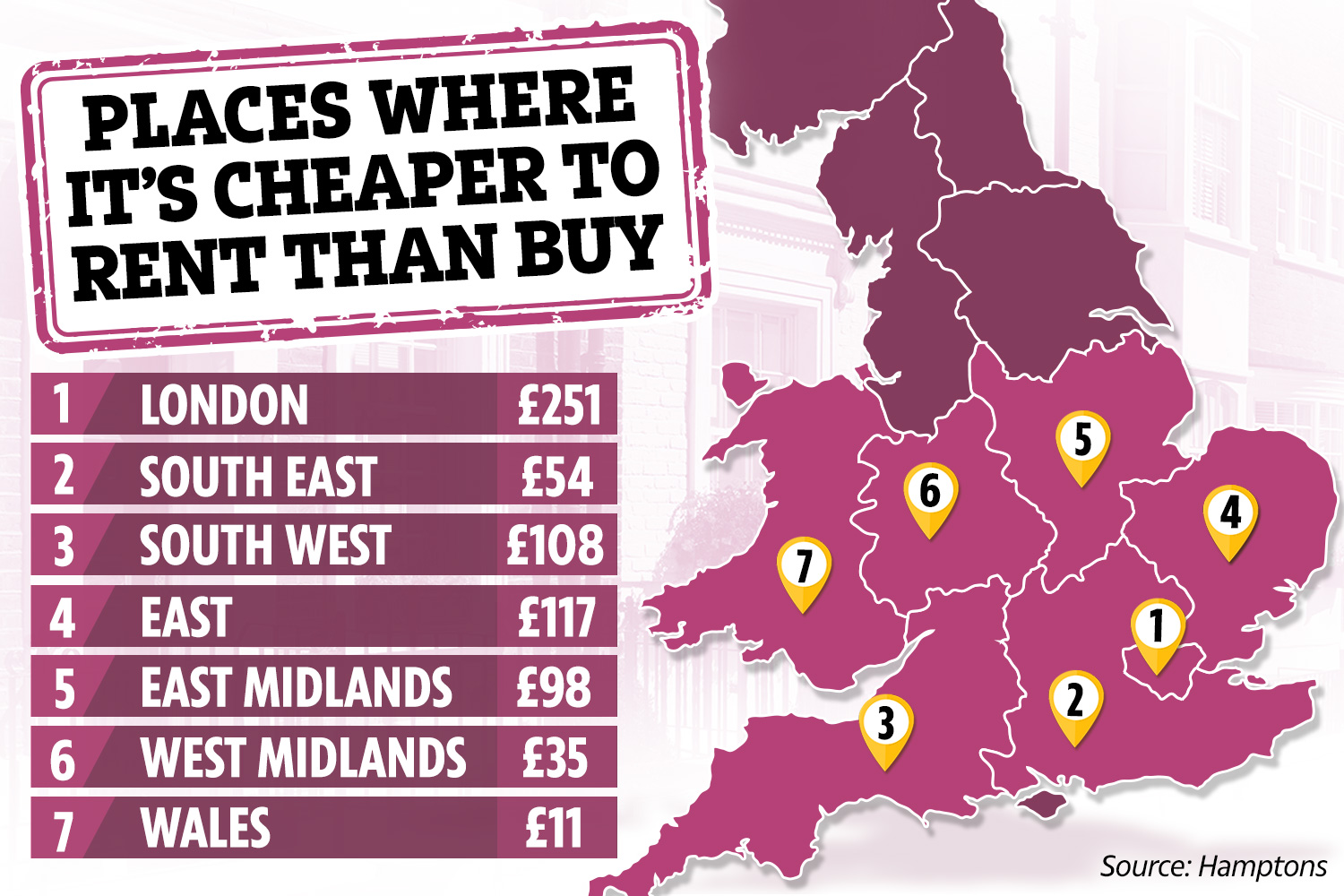 The cost of renting works out as £1,054 per month, on average, according to Hamptons estate agents.

That compares to £1,125 for a mortgage for a first-time buyer putting down a 10% deposit.

The difference means the renter is now £71 a month better off compared to a homeowner.

Before the pandemic it was the other way round and the homeowner was better off by £102 a month compared to the renter.

What help is out there for first-time buyers?

GETTING on the property ladder can feel like a daunting task but there are schemes out there to help first-time buyers have their own home.

Help to Buy Isa – It's a tax-free savings account where for every £200 you save, the Government will add an extra £50. But there's a maximum limit of £3,000 which is paid to your solicitor when you move. These accounts have now closed to new applicants but those who already hold one have until November 2029 to use it.

Help to Buy equity loan – The Government will lend you up to 20% of the home's value – or 40% in London – after you've put down a 5% deposit. The loan is on top of a normal mortgage but it can only be used to buy a new build property.

Lifetime Isa – This is another Government scheme that gives anyone aged 18 to 39 the chance to save tax-free and get a bonus of up to £32,000 towards their first home. You can save up to £4,000 a year and the Government will add 25% on top.

In London the difference is even bigger. Renting is now £251 cheaper than owning – previously a homeowner would be paying £123 less than a renter.

There are seven regions in total where renting now costs less. Before the pandemic, it was always cheaper to buy than rent.

Here's where it's cheaper to rent than buy, and by how much on average:

There are four places where the reverse is true and it remains cheaper to buy than rent: the North East, North West, Yorkshire and Humber and Scotland.

Renting also becomes even cheaper compared to the monthly repayments for a first-time buyer putting down a smaller deposit of 5%.

Renting works out, on average, £195 cheaper.

There is a bigger difference compared to a 10% deposit because interest rates are generally higher the smaller the deposit you have, and this increases the cost further compared to renting. 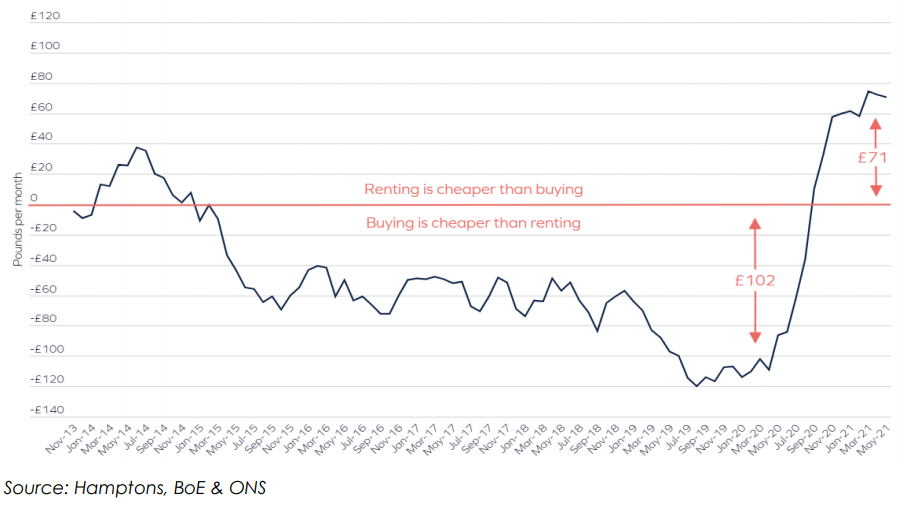 The exact price difference for individuals can depend on the type of home being bought or rented and a buyers circumstances, of course.

But the research signals a shift in the renting versus buying cost because of the pandemic.

A common gripe of wannabe homeowners has been that they are forking out for the higher cost of renting, when paying off a mortgage would be cheaper.

First-time buyers are often held back from buying by other mortgage requirements, like how much they earn and how much they can save for a deposit.

While the switch signals renting could now be cheaper than buying on a monthly basis, you won't end up owning your own home when renting.

Don't forget too that there are additional costs involved in owning a home on top of monthly mortgage repayments, like insurance, ground rent and decorating.

The cost of renting has increased by 7.1 % over the past 12 months, according to Hamptons' monthly lettings index.

But the cost of homeownership has also increased over the same period for two reasons: strong house price growth and the increased cost of buying a home for first-time buyers.

Aneisha Beveridge, head of research at Hamptons, said: "The pandemic has reversed a six-year trend which now makes it cheaper to rent than buy a home.

"A year ago, lenders were either increasing their rates or withdrawing higher loan-to-value mortgages altogether.

"For first-time buyers in particular this pushed up the cost of paying a mortgage, if they could get one at all, to well above the cost of renting."

Many lenders pulled mortgages from the market that required a smaller deposit of 5% at the start of the pandemic.

What is stamp duty?

STAMP duty land tax (SDLT) is a lump sum payment anyone buying a property or piece of land over a certain price has to pay.

Up until July 8 2020, most house-buyers in England and Northern Ireland had to pay stamp duty on properties over £125,000.

The Chancellor extended the help until September 2021 in his Spring Budget.

The holiday will last in full until June, before being reduced to £250,000 from July.

The rate a buyer has to fork out varies depending on the price and type of property.

Rates are different depending on whether it is residential, a second home or buy-to-let, or whether you're a first-time buyer.

The usual system in England for residential properties means:

For second homes or buy to let properties:

Stamp duty rates are different in Scotland and Wales.

While some have now become available again, interest rates are generally higher.

Ms Beveridge said: “It is likely the balance will swing back somewhat towards buying, particularly as mortgage rates come down. However this is likely to be partly offset by rising house prices.

"And while interest rates are falling, they’re still considerably above where
they were pre-pandemic on higher loan-to-value loans."

She added that the difference in cost between renting and buying was likely to close over the rest of the year.

House prices have shot up during the pandemic, thanks in part to the a stamp duty holiday.

Tax on the first £500,000 of a home purchase has been scrapped thanks to the initiative, which was launched by Chancellor Rishi Sunak last year.

From July, the tax-free threshold will drop for home buyers to £250,000 until September.

Homebuyers are racing to beat the stamp duty holiday – and they should beware of falling into negative equity, experts have warned.

One of Britain’s narrowest houses is up for sale – and the two-bed terrace is just 8ft wide.