A Mexican wrestler has been arrested for a brutal attack on a 5-year-old boy.

Einar Cruz, whose ring name is ‘Einar El Vikingo’ (Einar The Viking), was performing in an unofficial outdoor event in Venustiano Carranza in Mexico City, when things went decidedly off-script.

Shocking video of the incident shows the 21-year-old heel, sitting on the road having just lost the match, when a tiny boy named Mateo runs up and “chokes” the defeated bad guy to the cheers and laughs of the small crowd of spectators.

But Einar El Vikingo doesn’t appear to find it that funny; grabbing the boy’s skinny wrist, he wrenches it free and into an armlock, slamming his face into the ground while doing so.

The child doesn’t have a second to recover before the hulking fighter flings him clear across the road, smacking his head into the pavement as he tumbles.

The laughter quickly dies out as the wrestler stalks off, leaving Mateo motionless in the middle of the road, while members of the crowd run to confront him.

Cruz was arrested; but according to Attorney General of Justice of Mexico City Ernestina Godoy Ramos, had to be released shortly afterward, because the boy’s injuries were minor — healing in approximately 15 days according to a medical examiner, per Teledario — and not enough to charge him at the time.

El Vikingo has however been suspended indefinitely by the Mexico City Wrestling Commission, not necessarily for the attack on the boy, but for wrestling without a license in the unsanctioned event.

“I was really upset that he grabbed my grandson,” Mateo’s grandmother Sandra Alvarez told a press conference. “I yelled at him ‘what’s going on?’ and he yelled back at me. Then my nephew and my brother stepped in, and then everybody started crowding around him.”

“As you can see from the video, there was no police there to detain him. That’s not right when there’s a child involved.”

She said her grandson is recovering well, however.

On Monday female wrestler Marcella paid Mateo a visit, calling out the “pseudo Luchador” Einar El Vikingo for attacking and threatening the boy

“The Luchistica family we are outraged by this action,” she wrote. “We must not allow violence, hopefully the authorities will get to work.” 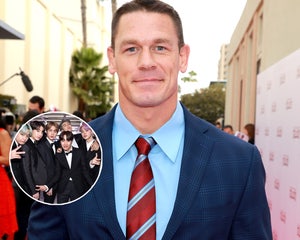