A woman who created a 30-page Google Doc about lesbianism while questioning her own sexuality has amassed tens of thousands of online fans who credit her ‘Am I a Lesbian’ guide with helping them to navigate their own preferences.

Angeli Luz, 21, anonymously published a link to the public document for ‘questioning lesbians’ in a Tumblr post using the handle @cyberlesbian in January 2018. The 30-page text explores how societal conditioning can lead lesbians to have conflicting feelings and attraction toward men.

‘I realized I loved women when I was a teenager, but I never quite knew if my attraction for men was real or a social construct I took in as a facet of my identity,’ Luz told Vice. 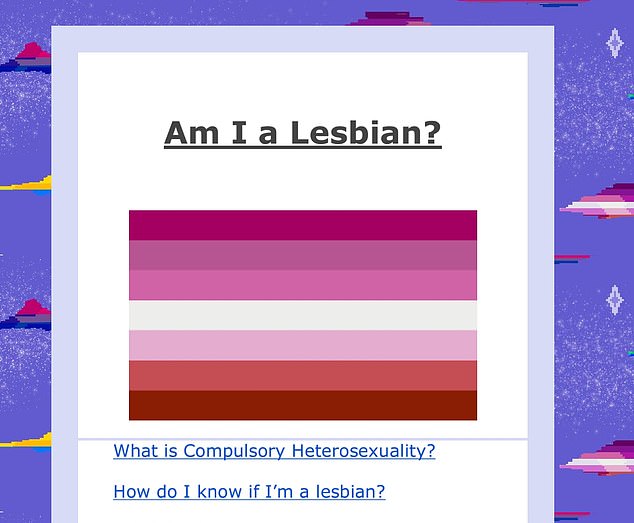 Guide: Angeli Luz, 21, anonymously published a link to her ‘Am I a Lesbian’ Google Doc in a Tumblr post in January 2018 using the handle @cyberlesbian 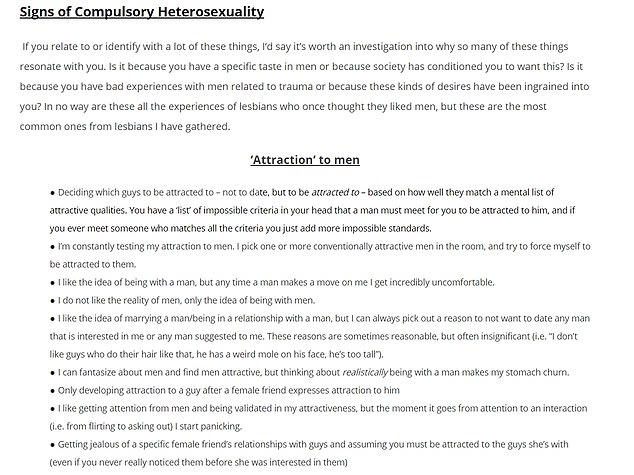 Reflection: The 30-page text begins with a section explaining compulsory heterosexuality, the idea that heterosexuality is ingrained from birth by a patriarchal and heteronormative society

‘I started researching compulsory heterosexuality and found that many lesbians had the same experiences I did. I created the document as a tool of self-reflection for myself and others.’

It took Luz two days to write the document, which has received more than 30,000 notes on Tumblr.

It begins with a section explaining compulsory heterosexuality — the idea that heterosexuality is ingrained in individuals from birth by a patriarchal and heteronormative society.

The term was popularized by the feminist poet Adrienne Rich in her 1980 essay titled ‘Compulsory Heterosexuality and Lesbian Existence.’

In the section, Luz explains that women are ‘taught from a very early age’ that it is their job to please men and fall in love with them.

‘Compulsory heterosexuality is what forces lesbians to struggle through learning the difference between what you’ve been taught you want (being with men) and what you do want (being with women), which is why so many lesbians have dated men at some point,’ she writes.

Luz later notes that ‘many lesbians STILL struggle with compulsory heterosexuality even when they know they don’t want men.’

Subsequent sections better explore how cultural conditioning toward heterosexuality can have lesbians doubting their sexual orientation because it doesn’t seem as clear cut as they feel it should be.

‘Attraction is super complicated. It’s possible to recognize a man IS attractive but not be attracted TO him,’ Luz explains.

‘Attraction is often coerced by societal conditioning and some lesbians have hypothetical attraction to men due to compulsory heterosexuality. But we don’t want to actually date or have sex with a man ever.’ 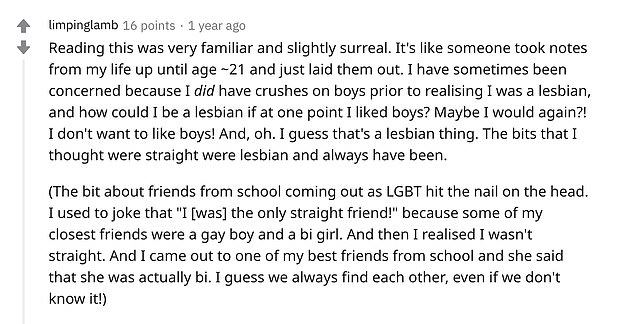 Going viral: The document has been shared across social media, including on Reddit and Twitter. Many Reddit users praised the text for helping them when it was posted last year

The thought-provoking text is written casually as if it were a blog post and has plenty of bullet points for self-reflection and analysis.

The second to last section of the document, ‘You might be a lesbian if TL;DR,’ features a list of signs that a woman’s attraction to men may be the result of compulsory heterosexuality.

‘You feel like you could live with a woman in a romantic way, even if you can’t imagine doing anything sexual with a woman,’ reads one bullet point.

‘You lose interest in a man as soon as they seem interested in you,’ another says.

Luz told Vice that she read personal accounts from other lesbians to create the guide. While she doesn’t include citations in the text, she does share a list of lesbian Tumblr pages, many of which are now defunct. 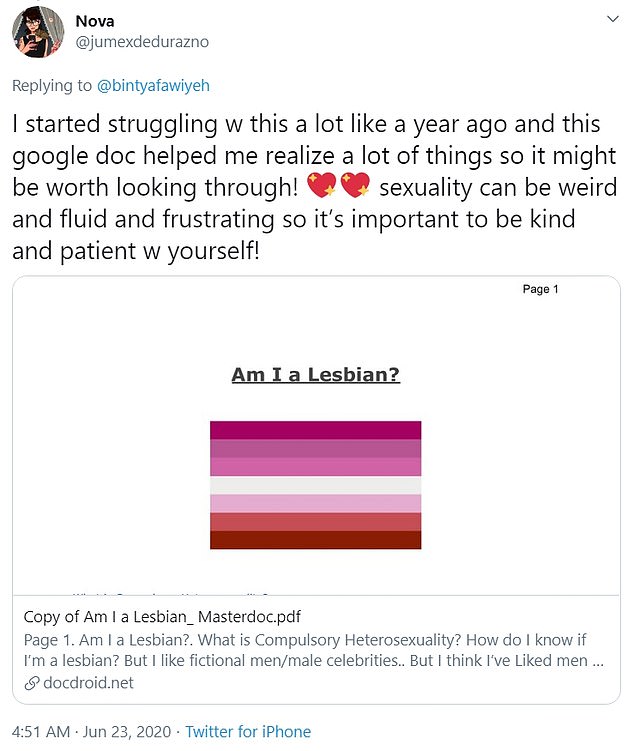 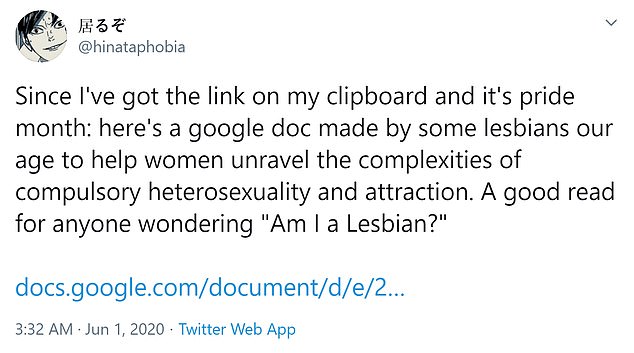 Life-changing: A number of women say the document made them realize they are lesbians

The original link to the document no longer works — clicking on it leads to a Google page that says: ‘We’re sorry. You can’t access this item because it is in violation of our Terms of Service.’

But the document has been shared across social media, including on Reddit and Twitter, where it has received plenty of praise from fans who insist it has changed their lives.

‘This is without a doubt my favorite Google Doc. I’ve gone through it and highlighted all the parts that match me so I can revisit it should I ever be in a situation where I doubt myself,’ one Reddit user wrote last year.

‘I remember questioning whether I was a lesbian or not for a long time and then I stumbled upon a link to that masterdoc,’ someone else shared.

‘I read over it while in class at college and I ended up leaving to the bathroom to break down sobbing with relief when I realized I related to almost every single bullet point and that I was a lesbian. Reading that masterdoc was like the biggest weight off my chest.’

One Twitter user shared a link to the document on June 1 in honor of Pride Month.

‘Here’s a google doc made by some lesbians our age to help women unravel the complexities of compulsory heterosexuality and attraction,’ she shared. ‘A good read for anyone wondering “Am I a Lesbian?”‘