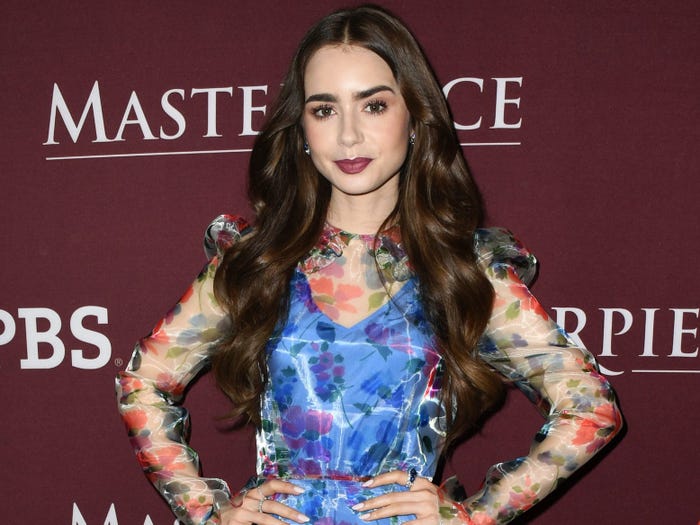 2020 has been a whirlwind year — so it's no surprise that some celebrity couples are looking ahead to the future.

Since January, numerous celebrities have gotten engaged and shared photos of their sparkling diamonds on Instagram. Actor Wilmer Valderrama was one of the first stars to propose in 2020, and celebrities like Jenna Dewan, Lily Collins, and Gwen Stefani debuted her unique engagement rings a few months later.

Here's a look at the stunning engagement rings celebrities have shown off so far. 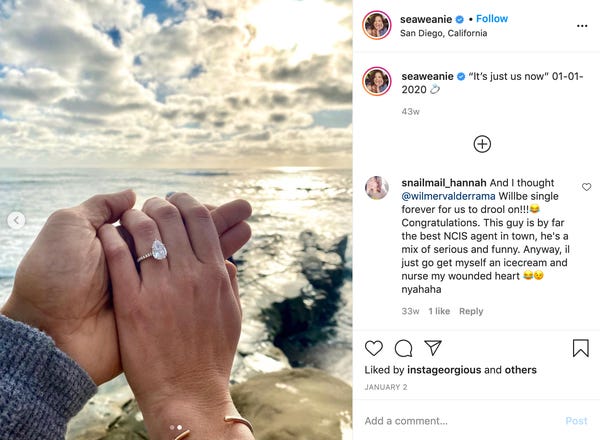 After getting engaged on New Year's Day, both Pacheco and the "That '70s Show" actor wrote "'It's just us now' 01-01-2020" alongside a photo of their proposal. The model also shared a close-up shot of her ring, which features a pear-shaped diamond and smaller stones across its band.

The ring could have cost $100,000, as its main stone is estimated to be at least four carats, as People previously reported. 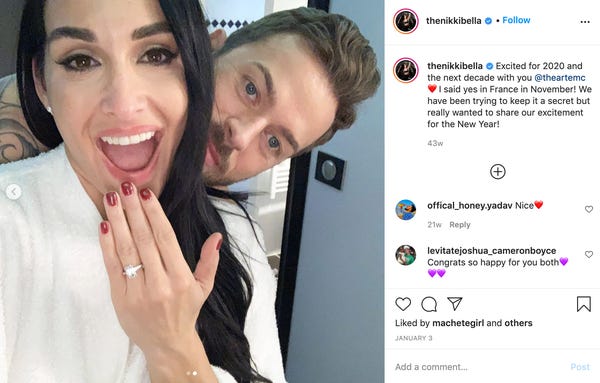 Technically, the wrestler said "yes" to "Dancing With the Stars" professional Artem Chigvintsev while visiting France in November 2019.

But after "trying to keep it a secret" — as Bella wrote on Instagram — the couple announced their engagement on January 3 with a photo of the wrestling star holding up her left hand.

Bella later shared another look at her rectangular diamond in a YouTube video. The ring is a classic Harry Winston design and evokes old Hollywood glamour, according to Bella. 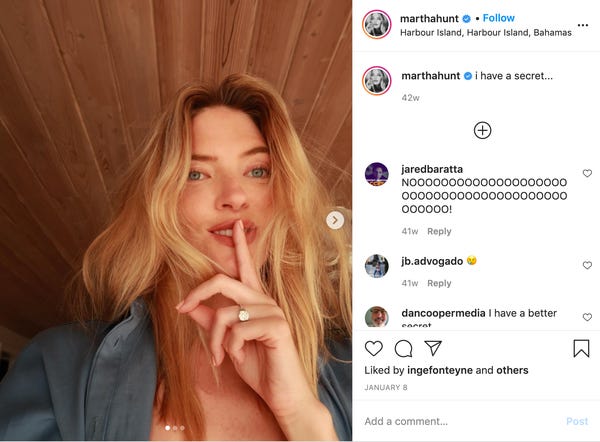 In an Instagram post on January 8, Hunt wrote "I have a secret…" alongside a photo of herself making a "shhh" symbol with her left hand — showing off her ring in the process.

As PureWow reported at the time, her cushion-cut diamond is likely three or more carats and is surrounded by smaller diamonds in "tapered baguette" shapes.

Lady Kitty Spencer was also photographed wearing what appears to be her engagement ring at the start of 2020. 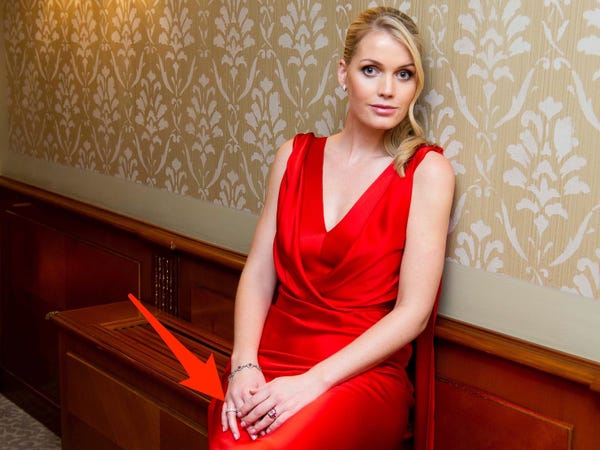 Eddie LeVian, the CEO of New York City-based jewelry company Le Vian, previously told Insider over email that her engagement ring could be worth approximately $160,000, as the eternity-style band looks to be approximately seven carats. 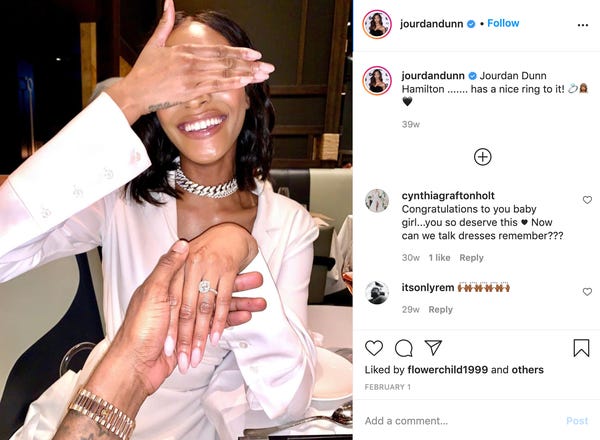 She first shared a photo of the jewelry piece on February 1, writing: "Jourdan Dunn Hamilton ……. has a nice ring to it! 💍👰🏽🖤."

Dunn gave fans another glimpse at her circular diamond — which is surrounded by a diamond halo and smaller stones across its band — with an Instagram post on February 3. As reported by The Knot, her ring could have cost between $40,000 and $100,000 depending on its color and clarity.

Jenna Dewan and her fiancé Steve Kazee embraced after getting engaged. 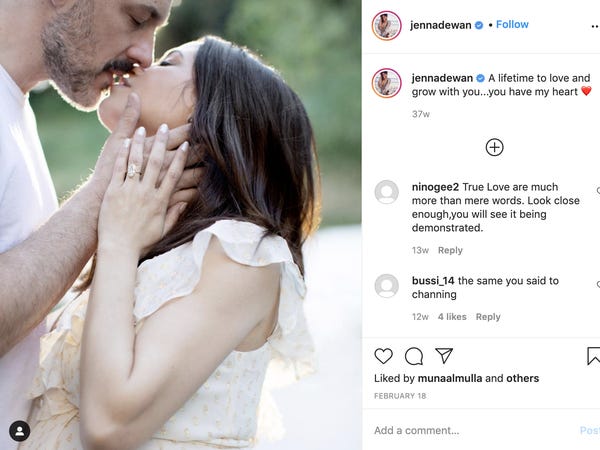 In a photo shared by Dewan on February 18, the actress is seen reaching for Kazee with her left hand, which was decorated with a large, oval-shaped diamond and a matching halo set on a gold band.

While sharing close-up shots of the ring on his Instagram story, Kazee explained that he created the piece with the help of actress Nikki Reed, who's also the founder of sustainable jewelry brand BaYou With Love.

"The design is based around my desire to have it echo the cosmos," Kazee wrote, according to Entertainment Tonight. He said that he chose its solitaire stone to represent the couple's "oneness in the universe surrounded by stars," and added smaller diamonds across the band to represent "the Pleiades constellation," which he said "holds special meaning" for himself and Dewan. 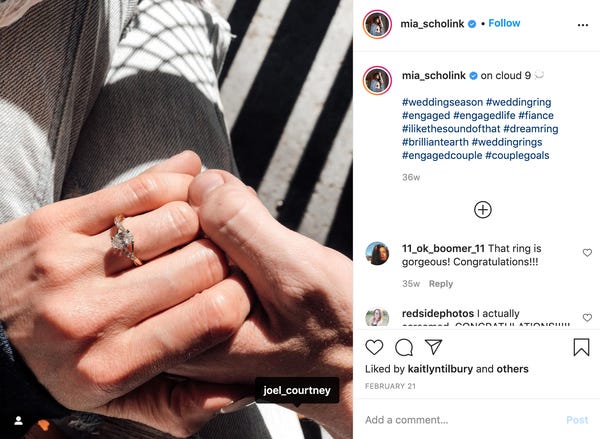 "I like it, so I just had to go and put a ring on it, " the "Kissing Booth" actor wrote on February 18 alongside a photo of their proposal.

A few days later, Mia shared a close-up shot of her and Joel holding hands, which revealed that her ring features an oval-shaped diamond set inside a criss-cross, yellow-gold band embellished with smaller stones.

Jeannie Mai got engaged to rapper Jeezy in April — and her ring is showstopping. 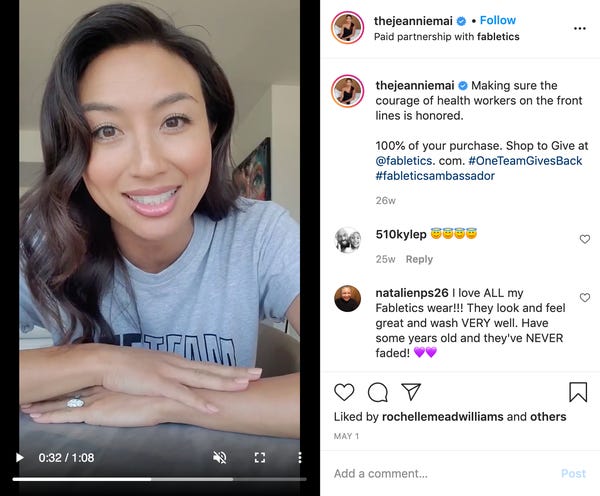 Mai, a host on "The Real," didn't share photos of her ring after getting engaged. Instead, she posted an image on April 6 showing herself and her fiancé walking on the beach.

She also wrote: "I want nothing more than to spend the rest of my life loving you — YES 💍Thank you, everyone, for celebrating this journey with us. We are praying love over everyone from here."

However, Mai's ring is seen in many of her other Instagram photos and videos. According to E! News, the marquise-cut diamond is likely between four and five carats and could have cost at least $150,000.

It's no surprise that Anne Burrell showed off her engagement ring while posing in a kitchen. 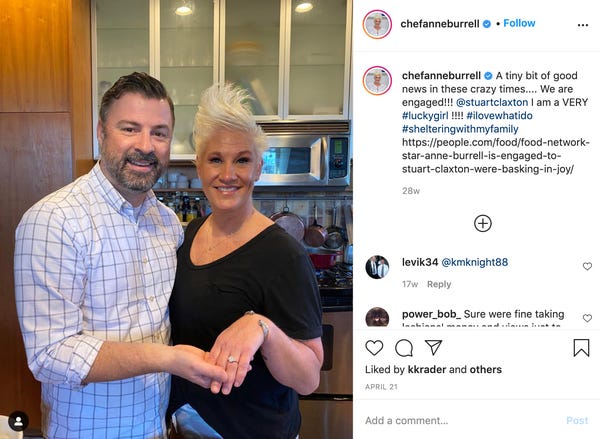 The celebrity chef announced her engagement to Stuart Claxton, who she met on Bumble, via an Instagram post on April 21.

Kathryn Money of Brilliant Earth told Us Weekly that Burrell's oval-shaped diamond is likely between one-and-half and two carats, and is seemingly "flanked by two pear or trillion-shaped diamonds," which are set on a yellow-gold band. 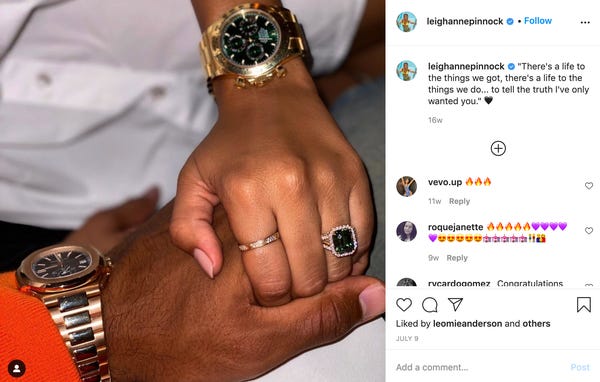 The musician shared numerous photos from her proposal on May 29, writing: "Guys.. wtf has just happened… 😩😳😂 He bloody did it, and I said yes 😩."

She added: "I'm marrying my soul mate, the man of my flipping dreams… I am lost for words, so I think I'm just going to go cry some more."

Pinnock later shared a close-up shot of her cushion-cut black diamond and its surrounding halo on Instagram. 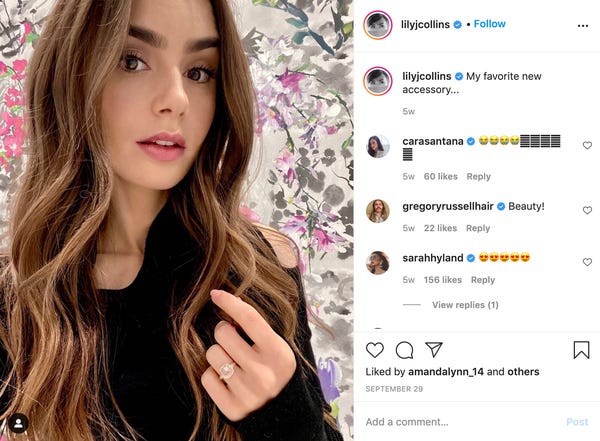 Her engagement ring, which includes a rose-cut diamond set in a yellow-gold band with a see-through setting, was custom-made for her by jeweler Irene Neuwirth.

According to Apeksha Kothari, the chief operating officer of diamond search engine Rare Carat, a ring like Collins' could have cost between $75,000 and $100,000, as it likely features a diamond between three and four carats.

Jasmine Tookes, a model and Victoria's Secret Angel, now has a standout diamond after becoming engaged to Juan David Borrero. 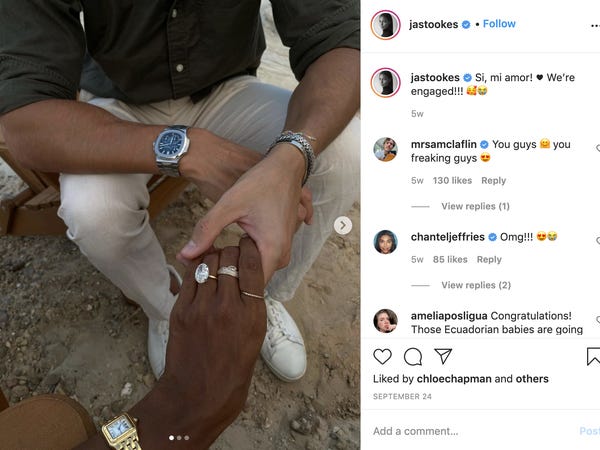 Tookes posted a photo on September 24 that shows her holding hands with Borrero, who is an executive at Snap Inc., the parent company of Snapchat. In the image, Tookes is seen wearing an oval-shaped diamond set on a thin, gold band. The ring was designed by Ritani.

The jewelry brand told Who What Wear that Tookes' diamond is seven carats. The publication also reported that the ring has a hidden halo, platinum prongs, and cost more than $250,000.

Musician Elle King's engagement ring is unlike any other worn by a celebrity this year. 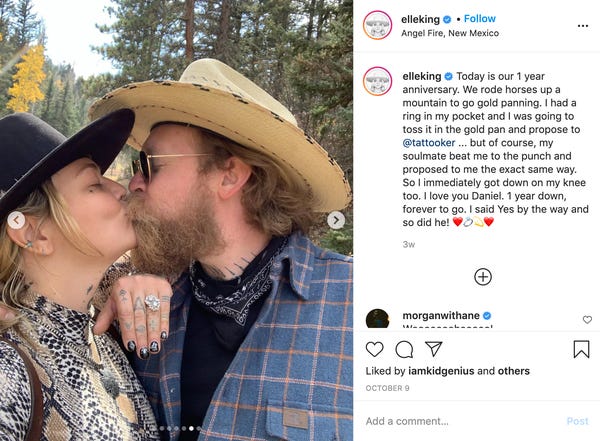 "Today is our 1 year anniversary," the musician wrote in an Instagram post on October 9. "We rode horses up a mountain to go gold panning. I had a ring in my pocket and I was going to toss it in the gold pan and propose to @tattooker … but of course, my soulmate beat me to the punch and proposed to me the exact same way."

The ring — which is shaped like two flowers and has small diamonds sprouting from larger, circular stones — likely cost around $20,000, according to Brides.

Gwen Stefani shared a sweet photo of her ring after getting engaged to Blake Shelton.

Alongside a photo of the couple kissing, Stefani wrote: "@blakeshelton yes please! 💍🙏🏻 gx." Though she has yet to share close-up pictures of the jewelry, Stefani's ring seemingly features a large center stone.