People with actual humanity are reeling over the fact that a 13-year-old boy was was shot and killed by a white police officer in Chicago last month. But Fox News host Sean Hannity seemed to demonstrate a huge bias that may even be a reason behind the Latino boy’s death: He called Adam Toledo a “13-year-old man.” 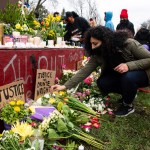 Hannity’s comment on his radio show came just prior to the release of bodycam footage that showed that, despite claims by prosecutors that Toledo was armed, the child was unarmed and attempting to surrender to police when he was murdered by officers.

According to reporting from The New York Times, during the confrontation, Toledo allegedly dropped a handgun over a fence behind his back and attempted to raise his hands in surrender. Approximately 0.8 seconds elapsed between the time Toledo began raising his and the time the fatal shot was fired by the officer.

“We are awaiting the release this hour of Chicago Police bodycam footage that captured the fatal police shooting of a young 13-year-old man by the name of Adam Toledo. And if social media is any indication, there’s a lot of chatter today about possible unrest,” Hannity said on Thursday evening’s The Sean Hannity Show. “I hope it doesn’t happen but with Chicago’s track record, every weekend — you know, I guess, you’d have to go with the odds, considering there are dozens and dozens of shootings and killings every weekend in Chicago — that this might not be particularly good.”

Yep, he’s more concerned with unrest than the fact that police are so scared of 13-year-old Black and brown kids that they shoot them dead with their arms up.

Twitter users were quick to draw comparisons between Fox News hosts’ characterizations of Toledo as a man while referring to Kyle Rittenhouse — the 17-year-old who is accused of shooting multiple people during racial violence in Kenosha, Wisc., after the police murder of George Floyd last summer — as a “little boy.”

The officer who shot Toledo, Eric Stillman, has been placed on administrative leave pending an investigation.

This latest police shooting tragedy comes during the trial of Derek Chauvin, the Minneapolis officer accused of murdering George Floyd last summer, and just after the police shooting of Daunte Wright, a 20-year-old unarmed Black man, also in Minneapolis.