Prince Harry is set to deliver a speech at the United Nations (UN) later today to mark Nelson Mandela International Day. Piers Morgan, 57, questioned the royal’s address to the General Assembly after it was announced the Duke of Sussex will discuss the legacy of the South African apartheid.

Meghan Markle, 40, and Prince Harry, 37, are expected to be in New York today to celebrate the historic anti-apartheid activist and former South African President Nelson Mandela.

The royal will deliver a keynote speech during a two-hour-long informal meeting of the General Assembly, the UN announced on their website.

Piers has since taken to Twitter and questioned Prince Harry’s appearance, in view of his 7.9 million followers.

The Uncensored presenter retweeted an article that read: “Britain’s Prince Harry will address the U.N. General Assembly at its annual celebration of Nelson Mandela International Day and is expected to speak about the legacy of the South African anti-apartheid.” 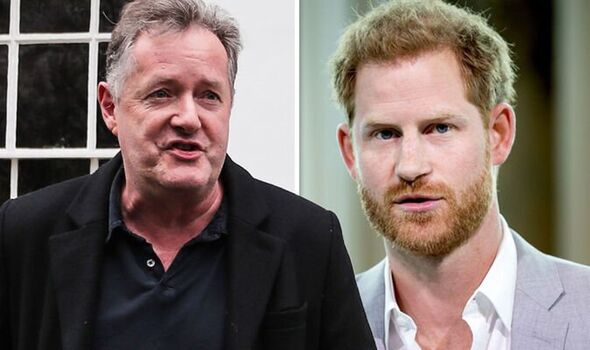 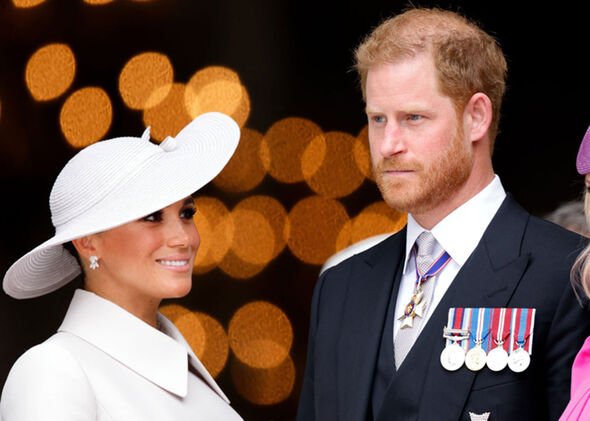 The former Good Morning Britain presenter hit out at the royals last week after it was announced Prince Harry would address the UN.

Another article read: “Prince Harry will be joined by Meghan Markle as he gives keynote speech at UN General Assembly for Nelson Mandela Day.”

The TalkTV host joked the pair had finally “found freedom” after they officially stepped down as working royals in 2020. 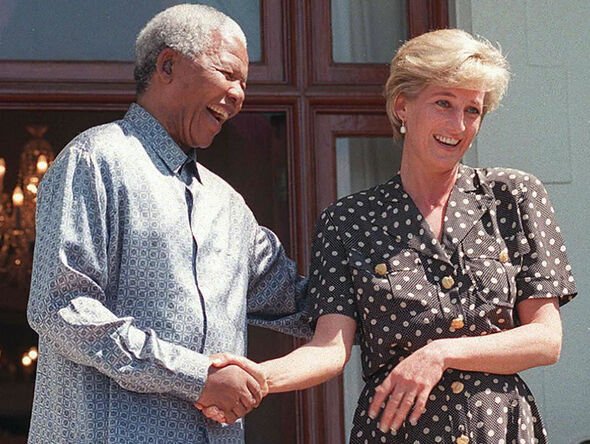 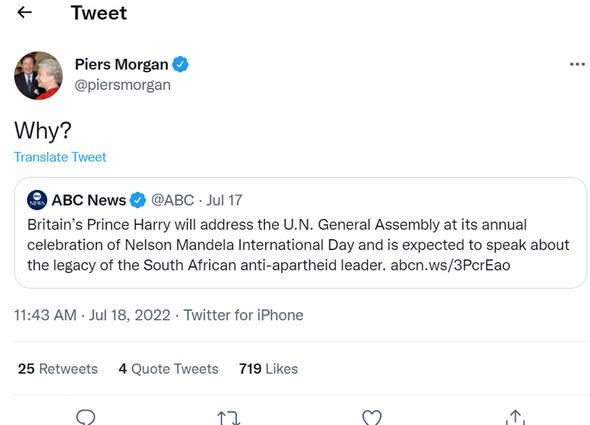 “[Laughing emojis] Well I guess they all found freedom after years of hellish incarceration. What a joke,” Piers wrote.

The former GMB presenter appeared to reference the book, Finding Freedom: Harry and Meghan and the Making of A Modern Royal Family, written by biographers Omid Scobie and Carolyn Durand, revolving around the married lives of the Duke and Duchess of Sussex.

The speech, as part of Nelson Mandela Day, will see the Duke of Sussex speak in front of an informal General Assembly gathering.

A UN spokesman told Express.co.uk: “The South African Mission has confirmed the participation of the Duke and the Duchess at Monday’s commemoration.”

The day was established by the UN’s General Assembly in 2009 to honour Mr Mandela’s life and legacy.

Then 91, the South African leader asked people to celebrate him by supporting their communities.

The session will begin at 3pm BST (10am EST) and will also feature remarks made by Deputy Secretary-General Amina J. Mohammed and the President of the General Assembly, Abdulla Shahid.

Mr Mandela served as South Africa’s first president from 1994 to 1999.

He died in 2013 at the age of 95 and the UN has encouraged its members to observe July 18 in honor of Mandela’s legacy in promoting peace around the world.

On their 2019 trip to the country, Prince Harry and Meghan also met with Mandela’s granddaughter Zamaswazi Dlamini-Mandela and the late South African leader’s cellmate Andrew Mlangeni.