Russian President Vladimir Putin’s longtime girlfriend has quite the interesting resume. Alina Kabaeva was a gymnast, model, and politician, before she became a media mogul who reportedly vanished following the birth of her twins in 2019. A Russian tabloid explained (via Daily Mail), “After the giving-birth-to-twins reports nothing was heard about Kabaeva, as if she had disappeared. Alina is not giving interviews, nor attending social events, nor participating in any TV programs.”

Kabaeva’s last public appearance was in 2018, when she defended her Ph.D. thesis at a university. While no one has seen Kabaeva since, she did release a statement as the head of the National Media Group to Russia’s women gymnastics team in May 2021, which read, in part: “I am very glad that we have all returned to the life we used to have, with training, competitions, tournaments and the Olympic Games.”

So how did a once teen gymnast end up becoming Russia’s “Secret First Lady?” It appeared to have started when she met the then-married Putin in 2000. At the time, Kabaeva was at the height of her fame and known as “the most supple woman in Russia,” according to the New York Post. Yet, she wasn’t linked to Russia’s president until 2008, when a tabloid reported that Putin left his wife of 30 years,  Lyudmila Putina, for a woman half his age. Putin never confirmed this but did once say (via The Sunday Times), “I’ve always had a negative feeling about people poking their snotty noses and erotic fantasies into other people’s lives.” 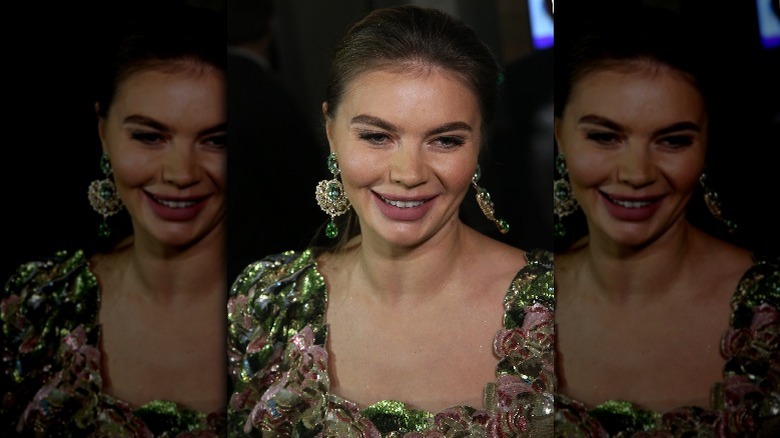 Alina Kabaeva may make headlines these days for her relationship with Russian president Vladimir Putin, but she has an interesting career of her own. According to the New York Post, Kabaeva is an accomplished gymnast who won the gold medal in the 2004 Olympics before she retired from the sport the following year. Kabaeva then continued to stay in the spotlight as a model, even appearing on the cover of Vogue Russia.

But Kabaeva is more than just a pretty face. She held a seat on Russia’s lower level of parliament for 8 years and is currently the head of the National Media Group, which includes pro-Kremlin radio, TV, and print. Outside of work, Kabaeva is the mother of four children, all of whom are alleged to be Putin’s, who also has two adult daughters from his previous marriage.

The couple is even rumored to be married after Kabaeva was spotted wearing the Russian version of a wedding ring during a trip to Italy. The gymnast remained mum on the ring but was once quoted (via Daily Mail) saying that she met someone she “love[d] very much,” adding, “Sometimes you feel so happy that you even feel scared.” As for Putin, he’s never confirmed the relationship, only admitting “I like all Russian women.” Don’t count on Putin to confirm it any time soon; he has also said: “I have a private life in which I do not permit interference. It must be respected.”