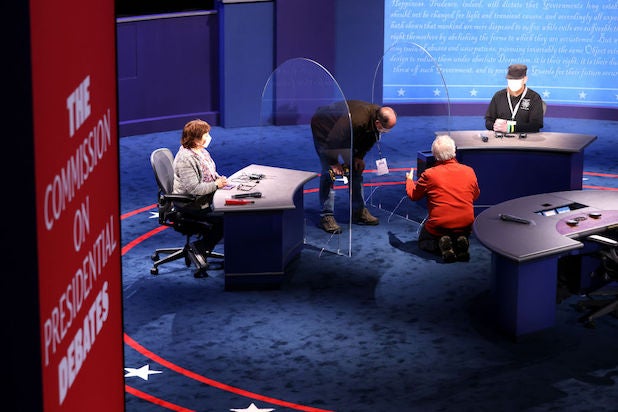 Workers make adjustments to newly installed plexiglass barriers on the stage ahead of the vice presidential debate between Kamala Harris and Mike Pence. (Photo by Justin Sullivan / Getty Images)

If audience members at Wednesday night’s vice presidential debate between Kamala Harris and Mike Pence contract COVID-19, the Commission on Presidential Debates says it is not liable.

Tickets for Wednesday night’s Harris-Pence matchup at the University of Utah included a disclaimer that the ticket holder “relieves CPD and the event site host of any and all liability of any kind or character, including in the event of live, natural disaster, acts of terrorism, or any other act, error, event, incident, accident, injury or sickness (including Covid-19),” according to a photo taken by a pool reporter at the debate.

It’s not immediately clear if this same COVID-19 disclaimer was present for last week’s presidential debate between Trump and Biden, and representatives for CPD did not immediately respond to TheWrap’s request for comment.

According to a pool report, there are about 20 seats — distanced at least six feet apart — reserved for guests in front of the stage. Another 60 seats have been given to University of Utah students who were chosen through a lottery system.

In light of the ongoing COVID-19 outbreak in the White House, which has infected more than 20 people who have been in contact with President Trump, additional safety measures, like plexiglass, have been set up to separate the two candidates on the stage.

But health experts have cautioned that the plexiglass won’t do much to protect against the spread of the virus, particularly since the Centers for Disease Control and Prevention recently issued updated guidance that said the virus can be spread via airborne transmission to people who are further than six feet apart.