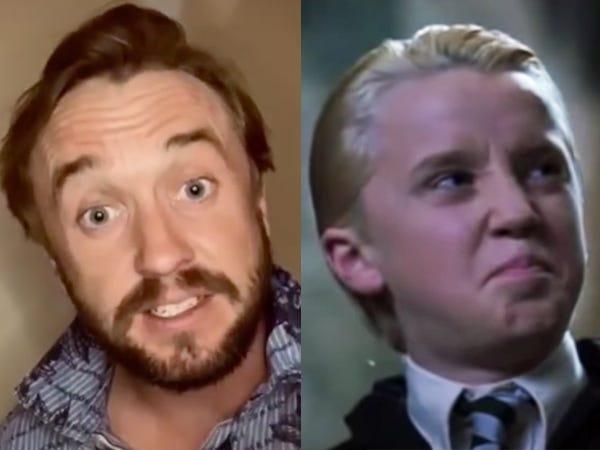 Tom Felton is challenging his fans to do their best impression of his performance in the "Harry Potter" film series. Felton's character Draco Malfoy was best known for his sneering pronunciation of "Potter," which usually phonetically sounded like "Pottah."

"Ladies and gentleman, muggles, witches and wizards, here you are and welcome to Draco-Tok," the actor said. "We are going to take you on right now, and find out once and for all who is the best in the world at saying the word — "

Then the video cut to a scene from "Harry Potter and the Chamber of Secrets," where Draco Malfoy muttered "Potter" during a duel with Harry.

Give me your best shot, muggles! Use the hashtags ##pottahchallenge and ##dracotok for a chance to duet

Felton's TikTok goes on to show his own recent attempts at recreating the performance, but failing to nail the pronunciation. He then told fans to use the hashtags #PottahChallenge and #DracoTok to post their videos.

In less than a day, dozens of videos under the hashtags were uploaded. On Sunday, Felton made a duet video, showing himself reacting to a young child's attempt at the challenge. He gave them a big round of applause at the end of the video.

Then, on Wednesday, Felton responded to a second entry in the #PottahChallenge. In this video, popular TikToker KallMeKris (who has 8.2 million followers) reenacted a full scene from "Harry Potter and the Order of the Phoenix."

"Potter. Potter! Is it true you fainted," Kris said in imitation of Felton's accent. "I mean, you actually fainted?"

Kris also got a round of applause from Felton.

"My life is complete," Kris wrote upon seeing that Felton had responded to the video. "Thank you kind sir for your approval. Love your work. I'm going to go faint now."

So far, Felton hasn't reacted to any more of the entries, but there are many more videos under the #PottahChallenge hashtag, all with a combined 58.5 million views.

This isn't the first time Felton has made waves on TikTok by engaging with the "Harry Potter" community. Last month, Felton made a video where he jokingly reacted to the videos under the #DracoTok hashtag. Fans on TikTok had been using the hashtag for videos devoted to their crushes on the character of Draco Malfoy.

Now the #DracoTok videos have a combined 3.7 billion views on TikTok. You can see Felton's reaction-video to the #DracoTok phenomenon here.