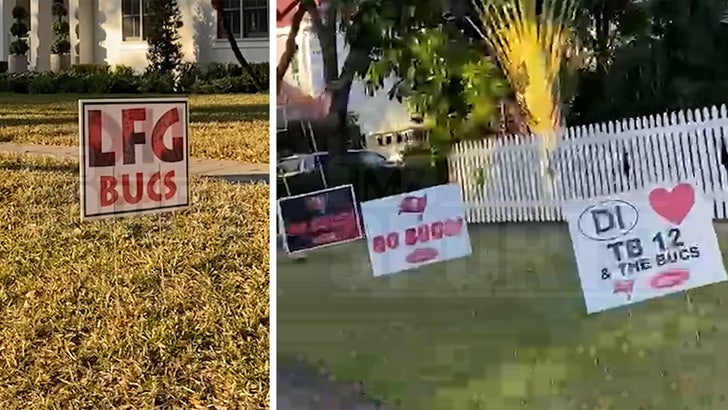 Tampa SERIOUSLY loves its new QB … check out the street leading up to Tom Brady‘s mansion — it’s been flooded with signs supporting the Bucs star ahead of Super Bowl LV!!

TMZ Sports has obtained footage from the blocks surrounding Brady’s rented crib in Florida … and you can see there are signs EVERYWHERE backing the 43-year-old.

We’re told nearly every house around Brady’s has a sign in its front yard — and some are super creative!!

Some other cool ones? “Honk for Gronk” and “Brady Gronkowski 2020.”

Of course, Tom only moved into Derek Jeter‘s spot on the waterfront less than a year ago — but it’s clear as day, a bunch of wins and a Super Bowl appearance has his neighbors fired up to have him around!

We are told, though, there is at least ONE Kansas City Chiefs flag on the block in someone’s yard.

But, we’re guessing Tom’s not going to mind the extra motivation …