The Queen and Prince Harry reportedly had a heart-to-heart in an effort to heal the rift between them.

During the four-hour chat, which is said to have taken place at Windsor Castle on Sunday, the Queen reportedly told her 35 year old grandson that he and Meghan Markle, 38, are free to rejoin the Royal Family and take up their duties once more if they wish to in the future.

A source told The Sun: "Hopefully it cleared the air."

According to the insider, the Duke of Sussex's grandmother ended the intimate chat by telling him: "You are much loved and will always be welcomed back."

Prince Harry is thought to have walked from his home Frogmore Cottage in Windsor Home Park to the castle, where the two spoke honestly about the future.

The royal source continued: "The Queen had a lot to talk to Harry about and this was the ideal time for them to both say their piece.

"When Harry and Meghan announced they wanted to quit it all happened very quickly and it was very stressful for all concerned."

They added: "Sunday was the first time the Queen has had the chance to talk to Harry on his own and really find out what his plans are. It was a much more relaxed environment and they were both able to speak their mind."

Prince Harry and Meghan decided to step down from their royal duties in early January and moved to Canada just weeks later with their baby son Archie.

With everything happening so quickly, it's said to have upset the Queen that she won't be able to see her great grandson as easily.

The source said: "It’s fair to say she is very upset about him and Meghan leaving and she would love to see more of Archie, as would Prince Charles and the rest of the family." 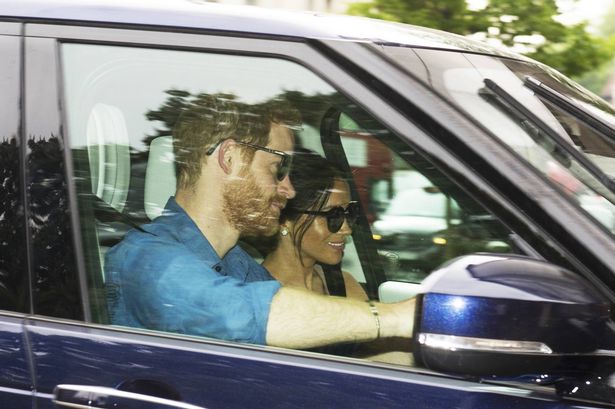 But the Duke's grandmother has allegedly accepted his decision to leave for the good of his family as the insider added: "But she accepts at the moment that his mind is made up and he intends to live in North America."

Speaking about the recent ban she imposed on the couple from using the title Royal Sussex, they continued: "However she also wanted to make it clear that the arrangement can only work if they do not exploit their royal status and try to ‘cash in’ — that’s why she wouldn’t let them use the word ‘royal’ for their foundation.

"The Queen is protecting the institution and she is also aware of the cost of security.

"That is something that still needs to be resolved. But Harry is also a much-loved grandson who she has always doted on.

"She made it very clear to him that he and Meghan are always able to come back if they change their minds and she will welcome them with open arms.

"Hopefully the chat cleared the air and the way forward is looking more positive."

The well-placed mole ended by saying that the Queen and her grandson will reconvene in one year's time to review the situation and decide whether Prince Harry and his wife should rejoin the Royal Family.