Meghan Markle’s first-ever children’s book was released on June 8 and is already a New York Times best seller, according to Fox News. On June 20, Meghan did an interview with NPR’s Weekend Edition to discuss “The Bench.” The Duchess of Sussex said that she was inspired by her husband’s relationship with their son, Archie, and wanted to do something special for Harry on his very first Father’s day — so she wrote him a sweet poem and put in on a small plaque on the back of a bench. The poem held great meaning for Meghan, and she felt that the sentiment could be shared with other families across the globe, so she turned her poem into a book. She worked with a talented illustrator named Christian Robinson to make her words come to life, and “The Bench” really came to life.

“‘The Bench’ is a series of vignettes — fathers and their sons share a bench while they drink apple juice, wait for the bus, look at the stars and put on their shoes. The bench is where they cry, celebrate and mend their scraped knees and broken hearts,” NPR reports. However, the book was more than just pictures and words on a page; Meghan included some very personalized touches to make it extra special. Read on to find out the hidden things that Meghan included in “The Bench.” 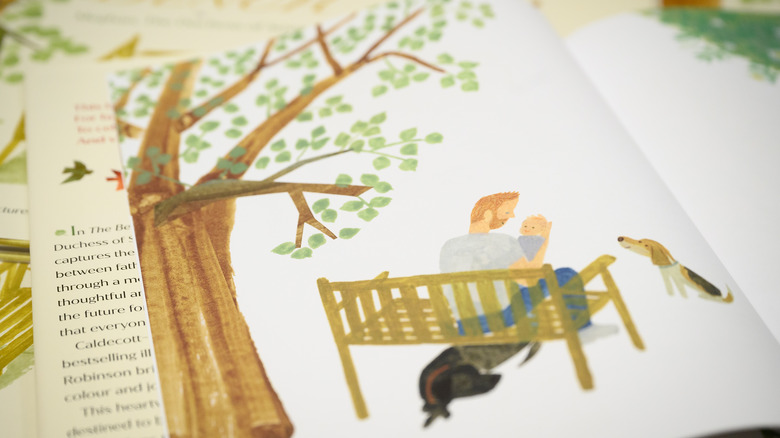 During her interview with NPR, Meghan Makle revealed some of the special things that she included in “The Bench.” For example, one illustration is clearly meant to depict Prince Harry with Archie and the Duke and Duchess of Sussex’s two dogs, Pula, a black lab, and Guy, a beagle. There is another illustration that shows an emotional mother standing in the window watching her son as he is picked up by his father — a man wearing a military uniform.

“That page is true to form for him and his family,” Meghan says. “There are lots of little small moments like that that were personal memories or anecdotes that I wanted infused in there,” she explained. Given that, it’s not surprising to hear that there are more things drawn in the book that hold special meaning for Meghan and her family. The duchess wanted to include “her favorite flower, her mother-in-law’s favorite flower, and, of course, the family’s rescue chickens,” according to NPR. “I needed my girls in there,” Meghan said.