Sophie Turner officially confirmed daughter Willa’s name with a gorgeous necklace spelling it out in gold and diamond letters.

Joe Jonas, 31, and wife Sophie Turner, 25m have been very private when it comes to their eight-month-old daughter Willa. While her name was reported around the time of her July 22, 2020 birth, Sophie confirmed the moniker the most stylish way via her Instagram stories on Apr. 7, 2021. The actress shared a glam selfie wearing several gold necklaces, one of which was a delicate chain that had the letters “W” “L” and “A” visible in fine diamonds and gold, while the “I” and the first “L” of Willa’s name were cut off at the bottom of the photograph.

Sophie looked absolutely stunning in the photo showing her jewelry tribute to Willa. She showed off her flawless complexion and perfect skin in the tight selfie, where she only wore a hint of eye liner and mascara, as well as a soft-pink lip that is ideal for springtime. The former Game of Thrones star had her blonde locks pulled back in a tight bun, and Sophie lifted her arm to hold on to it. In the process, she showed off her tattoo tribute to Willa.

Sophie already had a “J” tattoo on her left wrist in honor of husband Joe. But in Nov. 2020, she debuted new ink showing a “W” tattooed right below the “J,” seemingly in tribute to the new member of their family.  She also sported a tiny gold pendant with Willa’s apparent birthdate, as it read “22.07.20″ Her birthdate had previously been reported as July 27.

The gold necklace was a jump up in price from the simple “W” inking. “We believe this piece has approximately 0.5 carats of diamonds, which are beautifully set to spell out her daughter’s name on a 14K cable chain,” Tonia Zehrer Senior Vice President from Signet, tells Us. She estimates the price of the necklace as between $1,500 and $2,000. 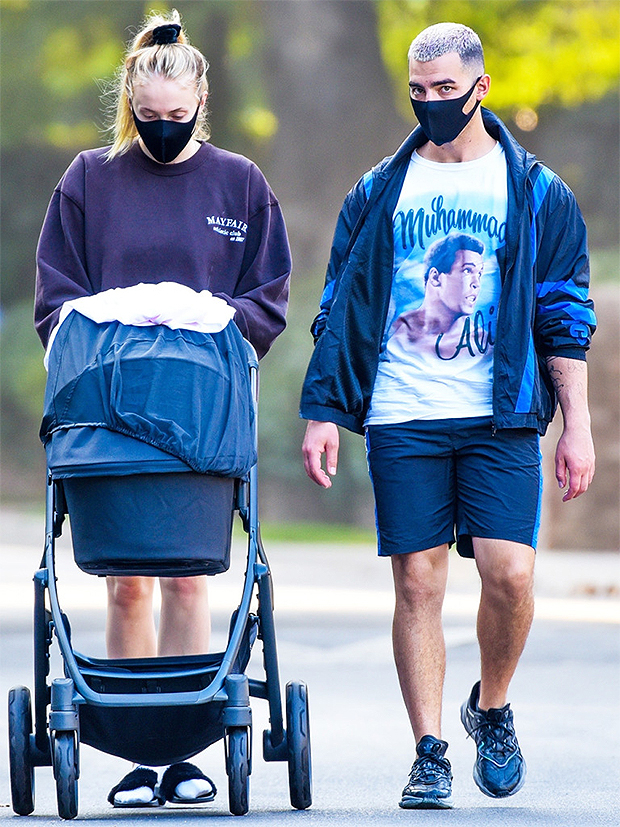 This proves that the couple did not name their daughter “Hannah” as Miley Cyrus jokingly claimed. On the 15th anniversary of her Disney show’s Hannah Montana‘s premiere on Mar. 24, 2021, the 28-year-old singer sent a massive pink and purple flower arrangement in the shape of a star to Joe and Sophie, as the DNCE singer shared a video of the blooms and the accompanying note to Instagram.

“To: Joe & Sophie! It was so sweet of you to name your daughter after me! Sending all my love to little Miss Hannah Montana! Love, Hannah Montana,” it read. While Miley caused some confusion over Baby Jonas’ name, Sophie has cleared things up nicely that their daughter is indeed named Willa. So far, the couple has yet to share any photos of their little girl, choosing to keep her life as private as possible.