So happily in love! Megan Fox & Machine Gun Kelly were out and about in Miami this weekend for the Mayweather vs. Paul match. See the cute pics here!

Megan Fox and Machine Gun Kelly continue their whirlwind, cross-country romancing, this time in Miami, FL. During the highly-anticipated Floyd Mayweather v. Logan Paul bout on June 7th, MGK, 31, and Megan, 35, canoodled in the VIP section of the Hard Rock Stadium, taking selfies and cuddling as fans looked on. At one point, the “Bloody Valentine” rocker was photographed giving his girl a piggyback ride, maybe to offer some relief from her lucite high-heels! As usual, Megan looked effortlessly chic in a simple pair of light-wash denim and a khaki cami with her long dark tresses in their natural waves. MGK donned a monochromatic red look, pairing an oversized red tank with coordinating metallic red trousers. Always the style star, he added some jewelry, including a big pearl necklace. 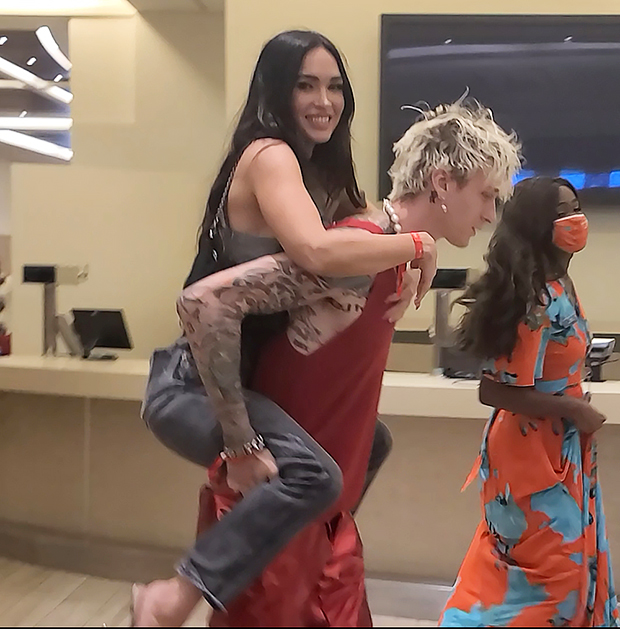 Several celebs came out to watch the Mayweather v. Paul fight, which went eight rounds and did not end in a knockout. “He’s better than I thought he was,” Mayweather said of the YouTuber after the bout. “… I was surprised by him tonight. Good work. Good little guy.” The match-up was not an official fight, but an exhibition, so there were no judges and no official winner read.

MGK, who is a friend of Logan Paul’s, put on a surprise performance at the after-party at the DAER nightclub in Seminole, South Florida. Jake Paul showed off clips from the wild performance, as did the hundreds of attendees including influencers Mike Majlak, Tana Mongeau, and George Janko. Megan was not photographed at the after-party, but we’re sure she was there in the wings supporting her man, just like she did at the Barstool Sports Indy 500 party, when he brought her out on stage! 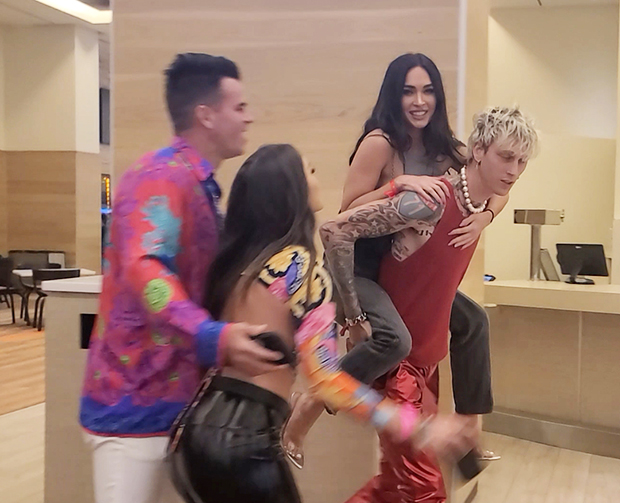 During the May 29th performance, MGK serenaded the Transformers actress during his performance of “I Think I’m Okay.” “She came out after everyone was chanting ‘Megan’ for some time,” an eyewitness told E! News. “Then she did stay on the stage in the background for the whole song.” They were also reportedly spotted cuddling backstage. These two are so cute!