Is that Maren Morris or Khloe Kardashian? Fans couldn’t get over how much the country star looked like Khloe at the Grammys!

Grammy Awards viewers were a little puzzled when they saw Maren Morris walk the red carpet ahead of the March 14 show, thinking that they were looking at Khloe Kardashian instead! With Maren’s new haircut — a long bob with platinum blonde balayage — she’s a dead ringer for the Keeping Up With The Kardashians star. Twitter ignited with fans freaking out over the resemblance. 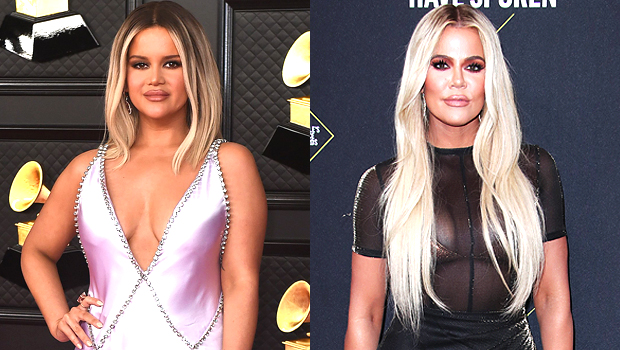 “maren morris is khloe kardashian-ing,” a Twitter user wrote after seeing the “80s Mercedes” singer on the red carpet. “Have we ever seen Maren Morris and Khloe Kardashian in the same room? #GRAMMYs” another Grammy Awards viewer joked. One fan thinks that the resemblance better fits Khloe from a few years ago, when she rocked a blonde bob. We can see it! “Is it just me or is 2021 Maren Morris looking more and more like 2016 Khloe Kardashian?” they tweeted. Now see that side-by-side of Khloe and Maren above and dare to deny they don’t look alike!

Maren was absolutely stunning at the 2021 Grammy Awards, floating down the red carpet in a lilac silk gown from Dolce and Gabbana. The gorgeous, low-cut gown was dotted with diamonds in a unique pattern and flowed behind her with an intricate train. She kept her makeup neutral, wearing a nude lip — a tried and true Kardashian fave. Later, she slipped into something entirely different to light up the stage for her big performance.

Maren dived into a stellar rendition of her Grammy-nominated hit “The Bones” (for Best Country Song) with John Mayer playing guitar and on backup vocals. She changed into a classic, strapless red gown for the haunting performance, keeping her hair in the same style as it was on the red carpet. Unfortunately, Khloe wasn’t at the Grammys this year, but we would have died to see what she rocked alongside her twin, Maren!