Lindsay Ell is making the most of a painful situation. The country musician walked the red carpet outside the Bridgestone Arena in Nashville on Wednesday, ahead of the 2021 CMT Music Awards, and rocked a silver foot cast and bedazzled crutches while doing so.

Speaking with ET’s Cassie DiLaura, Ell opened up about the injury, and how she came to the decision to embrace it for her red carpet look.

“I was chasing after my dog!” Ell said, explaining how she broke her foot in the first place. “She got out of the bus, we left the bus door open and she just went plummeting out of it. Naturally, like any dog owner, [I ran] after her, but I was in socks.”

“I jumped from the top step of the bus onto the parking lot and I just landed wrong,” she added. “I broke it pretty good.”

According to Ell, her doctors told her the injury was going to take upwards of eight weeks to fully heal, which means she’ll be spending quite a bit of time in the cast. However, she wasn’t going to let the injury, or the cast, keep her from enjoying the star-studded ceremony.

“I just think that’s what life is about,” Ell said of her stylish cast, wrapped in silver to match her silver ensemble. “If we’ve learned anything from the last year and a half, it’s how to take lemons and turn them into lemonade.” 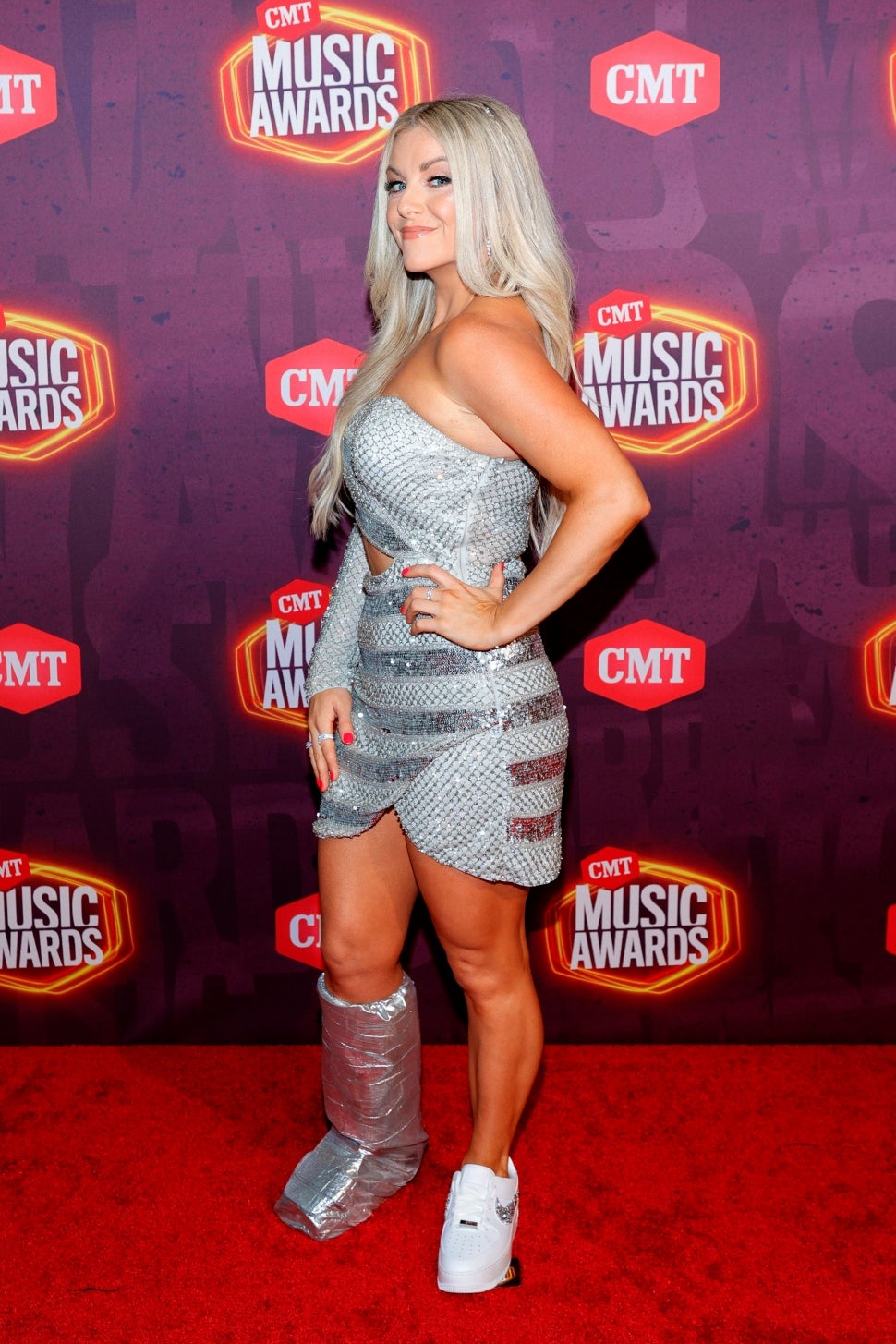 Thinking to the future, in regards to how she plans on performing her signature guitar solos with her injury, Ell said she and her team have thrown the idea around about having her come out on a rolling throne.

However, for tonight’s gala ceremony — during which she’s set to open the show alongside Carly Pearce and Lady A — Ell said they’ve worked everything out to incorporate her broken foot into the performance.

“Lady A have been so incredibly sweet in just embracing my whole situation,” Ell shared. “So, for my guitar solo, Hillary [Scott] is coming to me, and we’ve worked out staging so I don’t need to hop around on stage.”

Ell also teased the number, promising that it will be “quite an epic performance, that’s definitely going to celebrate the females in the house.”

Ell is performing with the artists in place of Gabby Barrett, who announced just days ago that she would have to back out of performing at the show “because of personal circumstances.”

For more on this year’s CMT Music Awards, watch the video below, and check out the complete winners list here!