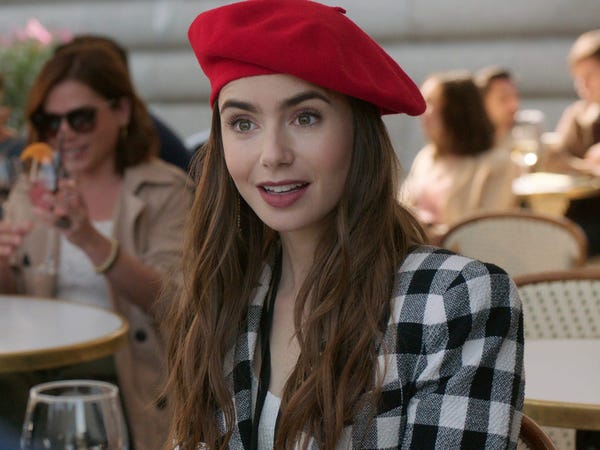 Lily Collins said that moving from the U.K. to the U.S. as a child helped her relate to her character on Netflix's latest buzzy dramedy, "Emily in Paris."

The actress, 31, plays a young marketing professional named Emily Cooper, who relocates from Chicago to Paris for work and tries to adapt to the city's culture. The twist? She doesn't speak any French.

Collins knows what it's like to start anew in a brand new country. She spent the first several years of her life in the U.K. with her parents, musician Phil Collins and socialite Jill Tavelman. When they divorced in 1994, Collins moved to Los Angeles to live with her mother at just 5-years-old.

"Although a child experience is very different than an adult, I did feel very much like a fish out of water when I walked into school that first day, having a uniform, not speaking the same, speaking English, but sounding British," she said during Thursday's episode of "The Big Ticket" podcast.

Collins added, "At that age, young kids are very blunt — 'You don't sound like me; you don't look like me!' You're just like, 'I just want to fit in and I just want to be embraced, and what do I do?'"

Collins also spoke about her admiration for Emily's decision to stay true to herself, even though she's different from the Parisians around her.

"You can see it in the first episode that Emily doesn't have to change who she is in order to be ultimately embraced and understood," she said.

Collins continued, "She's obvious; she's loud in her fashion and in her facial expressions. She's very much set in who she is, but she's also willing to embrace change and new ideas and new people and learn about herself — and also in turn, teach other people."

And while Collins was shooting the show's first season in Paris for fourth months, the actress said she was surprised to find herself facing some of the same challenging experiences as Emily.

"Things that happened to Emily happened to me," she said on Thursday's episode of "Live With Kelly and Ryan."

"I lost hot water for two weeks. My apartment didn't have heating. My elevator stopped working. There was construction everywhere," Collins added.

Because she was dealing with so many of the same inconveniences that were written into the show's plot, the actress joked that she thought the show's creator, "Sex And The City" creator Darren Star, may have orchestrated them.

"There were these moments where I actually thought to myself [and] asked Darren, 'Are you guys planning this so that I have more empathy for Emily, or is this just really what happens?'" she asked.