Say what you want about Emily in Paris‘s two Golden Globes nominations, but Lily Collins is celebrating the news—with her puppy.

Following yesterday’s announcement of the nominees for the 2021 Golden Globe Awards, the actress took to Instagram to share her excitement over her hit Netflix show being nominated for best comedy or musical series and her own nomination for best actress. In her post, Collins poses alongside her adorable rescue pooch, Redford.

“I tried to share the excitement with @redforddog but maybe it’s still too early for him… so honored to be nominated for a Golden Globe! I’m beaming for both my @emilyinparis family (my first project as a producer!) – and the incredible @mank team,” shared Collins. “What a wild morning! Ecstatic and grateful doesn’t even begin to cut it.”

The actress was asleep when the nominations were announced, she told The Hollywood Reporter, and woke up to a barrage of messages and phone calls. “I was deeply confused and so excited, and I’m just so over the moon,” Collins, who was also a producer on the show, told the outlet.

Collins shared more of her reactions in her Instagram Stories, fangirling over the fact that fellow actress Sarah Jessica Parker (who, coincidentally, also famously starred in an iconic Darren Star production, Sex and the City) announced her show’s nomination.

“I still cannot believe this happened this am,” she wrote above a photo of SJP reading the noms. “Having @sarahjessicaparker read out our show made this moment even more special. What an honor and how utterly unforgettable.” 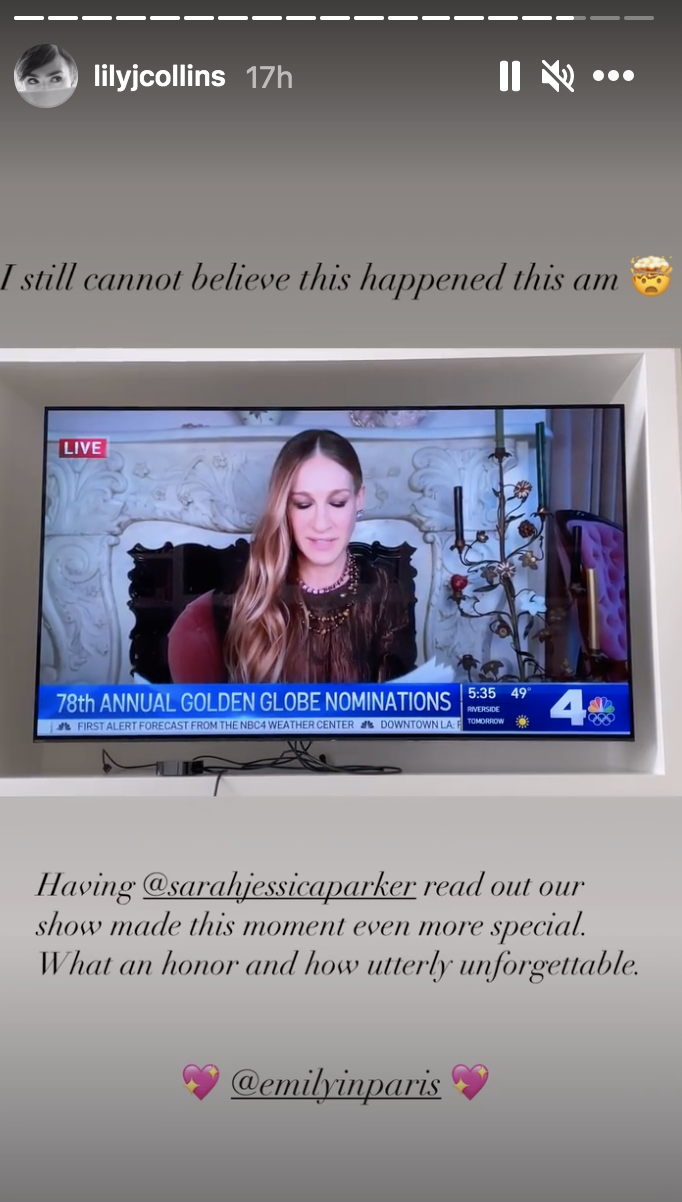 Collins spoke to BAZAAR.com back in October about the show’s instant success following its premiere and how she took in the news while staying at home amid the COVID-19 pandemic.

“I’m so appreciative of it, but I’m also a little bit removed from it. So it’s not all-engrossing and all-encompassing. But it is a little strange to kind of be removed from it, and then look at your phone and just see how it’s taken off—to look at the TikToks and the memes and the GIFs and on Twitter and Instagram and Facebook—it’s everywhere!” said Collins. “I’m so proud of the way that it’s kind of globally reached every country, and that’s thanks to Netflix, really pushing it out there and believing in it. And then to be number one in the world still, it is mind-blowing. All of us are incredibly grateful.”