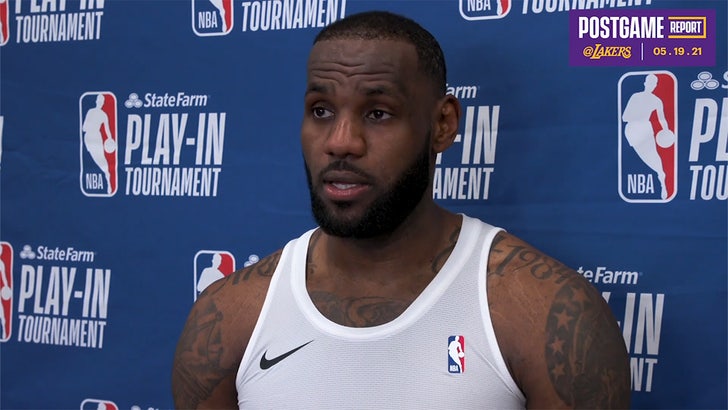 LeBron James says he was damn near BLIND during his game-winning shot Wednesday night … explaining to reporters his eye injury had him seeing “3 rims!”

The Lakers superstar had been poked in the left peeper just minutes before he uncorked a 3-pointer to beat the Warriors in their play-in game at Staples … and Bron said the injury was so bad, he barely had any vision when he pulled up for the big shot.

“The first thing I did when KCP kicked it out, I looked at the shot clock,” LeBron told reporters after his team’s huge 103-100 victory.

“The second thing I saw was three rims from being poked in the eye on that previous possession when I drove to the hole and then in transition. So, I just aimed for the middle one.”

The shot was incredible — it was about 5 feet beyond the 3-point line — and when ya factor in the pressure AND what his face had just gone through … it’s pretty big time.

Even Drake loved it!!!

As for the injury going forward, LeBron was clearly fortunate to have escaped serious issues … ’cause after he was jabbed by Draymond Green on the possession prior to the game-winner, things did NOT look good for L.A. or its superstar.

But, LeBron — with his eye clearly watering and swelling — said after the game he expects to be all right as the Lakers move on into the playoffs.